Ice chunks the size of cannon balls exploded from cone-shaped formations off of Point Gratiot in Dunkirk during last week’s Nor’easter.

On both shores of Lake Ontario, icy hills or mountains spew plumes of sand, water, ice – and even fish.

The Great Lakes’ ice volcanoes are waking up.

“It’s like a different world out there,” said Dave McCoy, an environmental educator at Evangola State Park.

Mother Nature’s handiwork has been on full display at Evangola – and around the region – this week. 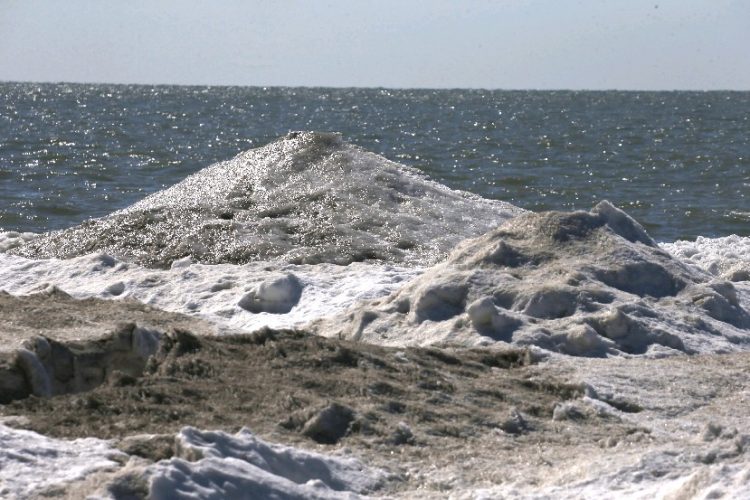 McCoy said more than two dozen of the ice cones sprang up along Lake Erie’s shoreline at Evangola as the result of the recent weather. Although ice volcanoes are usually an annual phenomenon in the Great Lakes, McCoy said this year’s crop has been special.

What’s more, these ice volcanoes are the fourth-generation of the 2016-17 winter season, which is also unusual, he said.

A mature ice volcano can grow as large as a house with a cavernous vent a yard or more wide. Here's a particularly impressive one captured on video:

This year, extreme variations in the weather – and instances of extra-strong wind and waves – broke up formations. That’s required nature to reconstruct them from scratch.

“We’ve had them form three times over the course of the winter,” McCoy said.

Not much was known about the development of ice volcanoes on the Great Lakes until scientists from SUNY Fredonia State began studying them in the 1970s. Researchers found a unique set of environmental conditions need to be in place to make an ice volcano.

First, some ice must be affixed to the shoreline.

Then, on-shore winds and wave action have to be just right. Winds are usually westerly, of about 20 mph or more, and they combine with cold water and frigid air to create and build the cones.

On the eastern end of Lake Erie, the ring of ice usually develops between Hamburg and Presque Isle at Erie, Pa.

The ingredients were there at Evangola this week: unseasonably frigid air, gusty winds, ice fastened to the shore and open, 33-degree Lake Erie waters.

Sights and sounds at the beach aren’t what you find during the summer. Instead of bikinis and beers, ice bombs and boulders rule the landscape.

It’s why McCoy, an ice volcano enthusiast, leads annual expeditions at the park to expose local residents to the wonders of winter shoreline.

Many imagine it’s like walking on the surface of the moon.