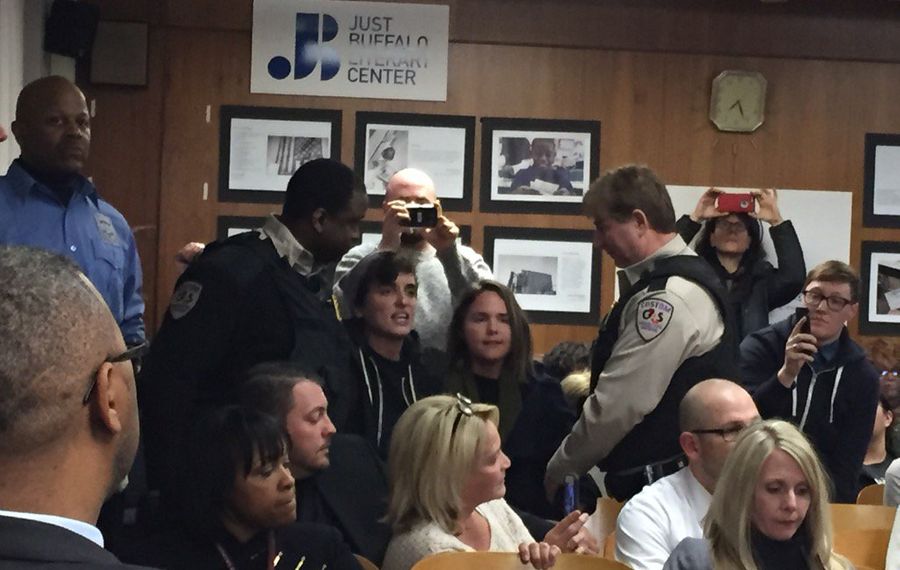 It was about an hour and a half into what would be an otherwise routine meeting of the Buffalo Board of Education Wednesday night, when four people stood up in the council chambers of City Hall to lead a protest calling for the removal of School Board member Carl Paladino.

"All in favor of the removal of Carl Paladino from the board say, 'Aye!'" they said.

"Aye!" came the response from several dozen others in the audience who showed up to join in.

It would be the second time in as many months that protesters would disrupt a Buffalo school board meeting, in response to Paladino's inflammatory remarks about former President Obama and his wife back in December. 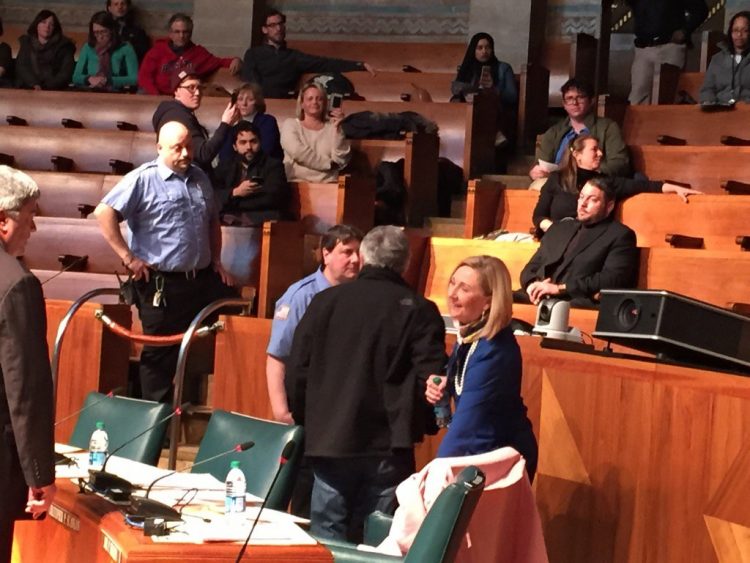 School Board Member Carl Paladino was booed upon arrival at Wednesday's board meeting. (Jay Rey/Buffalo News)

Four separate petitions – including one from the School Board itself - have been sent to the State Education Commissioner calling for Paladino's removal. The commissioner has yet to rule on the matter.

So at the end of the public comment period of Wednesday's meeting a now-familiar chant began.

"Hey, hey. Ho, ho. Paladino has got to go," the protesters sang.

In anticipation of the protest, the board had several security guards on hand Wednesday, but the public demonstration was allowed to continue. Board members – including Paladino - removed themselves from the council chambers and, instead, took refuge five flights down inside their usual board room.

Inside the board room, Board President Barbara Seals Nevergold conferred with a police officer, who expressed his concern about letting the protesters in for more of the same. But it's a public meeting, Nevergold said, and the public was allowed in.

No sooner had Nevergold warned them that they would be escorted out if there was another disturbance, then the chanting started again.

Four women locked arms. Security tried to remove the four, but they didn't budge. Instead, more voices joined them from the back of the room and outside in the hall.

Paladino didn't engage them. There was more discussion among staff about what to do next, before board members once again excused themselves from the room.

About 40 minutes after it started, the chanting stopped, and the protesters left on their own promising to be back.