WASHINGTON – Upstate New York homeowners would get a huge tax break – and House Republicans would get a few more much-needed votes for their health care plan – thanks to an amendment that Rep. Chris Collins got added to that GOP health legislation this week.

But that very amendment caused anger and panic in Albany Tuesday.

Gov. Andrew M. Cuomo and health care leaders warned that Collins' amendment – which would bar the state from imposing any Medicaid costs on its upstate and Long Island counties – would result in closed hospitals and nursing homes across upstate New York.

The Collins amendment, which House leaders accepted late Monday, prompted an extraordinary political battle a day later, as Collins and Cuomo angrily assailed each other over the proposal.

The battle over the proposal will likely come to a head on Thursday, as the House takes up the GOP plan to repeal and replace Obamacare.

Collins' amendment would end the state's 50-year tradition of sharing costs for Medicaid – which funds health care for lower-income Americans and nursing home care for those without resources – with the counties. 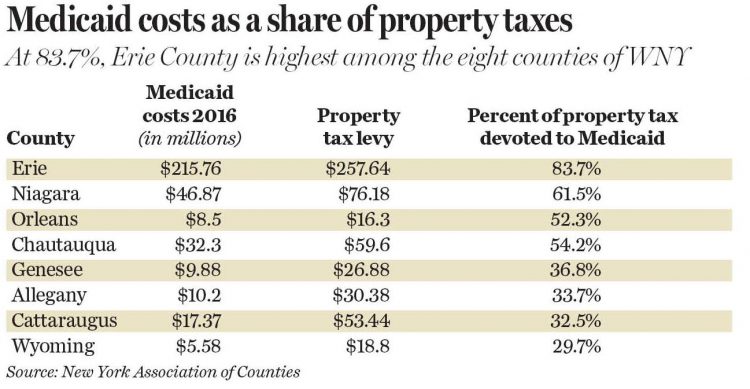 Counties have long complained about that burden. They had been forced to pay 25 percent of the state's Medicaid costs for years.

But then, Cuomo capped annual cost increases in the program at 3 percent and passed the savings on to the counties, which now pay a 13 percent share of Medicaid costs.

That figure would go to zero under the amendment offered by Collins, R-Clarence, and Rep. John Faso, R-Kinderhook. And the result, Collins said, would be a huge boost for Erie County.

"I think a reasonable thing would be to reduce the tax levy by three-fourths," said Collins, a former Erie County executive.

Such a move would reduce property taxes on a $200,000 Erie County home by about $1,000 a year, providing a huge jolt of income into the local economy, Collins said. Meantime, the county would still have additional leftover revenue to spend on roads and bridges.

"It's a huge economic driver, and it's so easy to accomplish," he said of his proposal.

But Cuomo waged a day-long offensive against the Collins/Faso effort, which would cost the state's Medicaid program $2.3 billion annually starting in 2020.

That loss of revenue would come on top of an extra $2.4 billion annually that the state would lose under other parts of the Republican Obamacare replacement, which is called the American Health Care Act.

"It is impossible for the state to pay and close that gap," Cuomo told reporters during a conference call.

Paying for that funding gap at the state level would probably mean the largest tax increase in state history, Cuomo said.

That would be too much for the state to bear, he said, meaning the costs would be forced onto the state's health care providers – including many who are barely profitable as it is.

"You will see hospitals close," Cuomo told The Buffalo News editorial board on Tuesday.

For example, he said Roswell Park Cancer Institute in Buffalo "will be unsustainable."

Cuomo dismissed the Collins/Faso amendment as an attempt to buy House votes for the controversial health care plan, which is in trouble because of opposition from hard-line conservatives who dismiss it as "Obamacare Lite."

"This is a reckless act with no thought to the consequences because they need the votes," Cuomo said.

Collins acknowledged that House leaders accepted his amendment because they needed every vote they could get from Republicans in New York's House delegation.

"I think we have eight of our nine Republicans in support of the bill now," with the exception being Rep. John Katko of Camillus, who has long opposed the GOP health bill, saying it doesn't offer a clear enough replacement for Obamacare.

Asked about Cuomo's fervent opposition to the Medicaid cost shift, Collins said the governor should find enough Medicaid cost savings to make up for the $2.3 billion in funding it would lose from the counties.

Told of Collins' comments, Cuomo – who is expected to run for a third term next year – said Collins and other Republicans should replace the lost $2.3 billion with federal funds.

"He should just buy one less jet and one less tank," Cuomo said.

Then, in a dig at Collins' controversial investments in an Australian biotech company, the governor added: "Or maybe he should invest in some stock transactions for us."

Collins' amendment bars states from shifting Medicaid costs onto the counties outside of New York City. If they did so, states could lose federal funding equal to the amount they charge counties.

Collins said he opted not to try to apply that provision to New York City because of the huge financial hit the state would take if it suddenly was forced to pick up the city's $5 billion in Medicaid costs.

The proposal also would not affect other states – of which there are 26 – that force counties to pick up some Medicaid costs. Most of those states only charge their counties for Medicaid's administrative costs, but New York goes much farther than that, charging counties for a share of hospital costs for facilities that see a large number of Medicaid patients.

The battle over the Collins/Faso amendment wasn't just a battle between Collins and the governor. It also pitted Republicans from across the state against the state's huge and politically formidable health care industry, as well as Democrats.

Rep. Tom Reed, R-Corning, raved about the Collins/Faso amendment. He said he was leaning against voting for the legislation until the amendment was added to it.

"This is an added reason why we should support the legislation," Reed said, adding that Cuomo should take the initiative to reform the state's Medicaid program in response to the coming funding cuts.

Meantime, Erie County Comptroller Stefan I. Mychajliw, a Republican, said the Collins/Faso amendment would relieve counties of the most onerous unfunded mandate that the state imposes on them.

The exact size of that burden depends on the number of Medicaid recipients it has. And Erie County, as an urban county with a large population of poor people, faces an especially onerous burden. State figures show that in 2016, 83.7 percent of the county's property tax revenue went to support Medicaid.

"This amendment relieves us of that back-breaking burden," Mychajliw said. "It gives us the opportunity to invest that money more wisely and return the majority of it back to taxpayers.”

Other Republican county leaders were overjoyed over the Collins/Faso amendment as well.

"The Medicaid program in New York State is the largest, most costly program in the nation," said George Borrello, a Chautauqua County legislator. "So taking that burden off of the shoulders of local property taxpayers will not only help to bring needed relief, it may also bring some needed attention in Albany to make true reforms."

Democrats, however, were not nearly so enthusiastic.

Asked about the Collins/Faso amendment, Erie County Executive Mark C. Poloncarz said: "I can't criticize it, because it would have a positive impact on Erie County government."

But, Poloncarz quickly added that the amendment is attached to a health care bill that would cause grave harm in Erie County, increasing the number of people without health insurance and thereby burdening local hospitals – and especially the county-funded Erie County Medical Center – with patients with no way to pay their bills.

"As I have said, the American Health Care Act is a horrible bill," Poloncarz said. "If I were in Congress, I would not vote for the bill just because of the Collins amendment."

At ECMC, the replacement bill elicited a cautious reaction.

"The impact of the bill and amendment is being analyzed, and we're concerned regarding the impact," said Peter Cutler, vice president of communications and external affairs at the medical center.

Medicaid represents about 40 percent of patient revenue at the Grider Street site.

Cutler said that, like others in the health care industry, officials at ECMC are watching for whether and how the bill will change as it moves through Congress.

"As the bill is considered and modified, we will have a clearer understanding of the impact on ECMC and its patients," he said.

While he earlier expressed some sympathy for the Collins amendment, he said that upon a closer look, he saw that it presents New York with a double whammy: the cost cuts it would face under the other parts of the health bill, along with the $2.3 billion it would lose annually from the counties.

"New York State is going to get clobbered under this bill," Higgins said.

Hospitals and other health care providers will be hit especially hard, said Bea Grause, president of the Healthcare Association of New York State.

New York's hospitals already operate on a razor-thin profit margin that would disappear if the state cuts Medicaid reimbursements to make up for the loss of revenue from the counties, she said, predicting that some medical facilities would be forced to shut down.

The state's low-income residents will suffer the most, she predicted. Not only will many lose their insurance under the bill, but they will also have to rely on health care facilities that would struggle with the loss of state funding.

She acknowledged that state and county officials have discussed eliminating the counties' share of Medicaid in years past, but she said that finding alternate funding sources for the program has proved to be very difficult.

"If this was so easy to fix, we would have done it already," Grause said.