The words “another day, another scholar” hang on a banner at Wilson High School.

If there ever comes a time when the school thinks about altering it, here’s a suggestion: “Another day, another scholar, another Niagara-Orleans League girls basketball championship.”

It has been nine years since the Lakewomen haven’t won a league title, the year that Brian Baker inherited the program from Western New York coaching legend Larry Lash.

Taking over for a Section VI Hall of Famer may seem like a daunting task to most. Baker not only made the transition seamless, he has taken Wilson to new heights.

“It’s been a long winning tradition here at Wilson,” Baker said, “and I think the program dating from back then to now has grown, come a long way. I have total respect for the guys who came before me.”

Lash won the school’s first five league titles from 1999-2008 and its first sectional title in 2002-03. Wilson has gone 168-30 overall since Baker started in 2008-09, 119-5 against N-O competition. Eight league and five Section VI titles have been added to the black and orange banners on the gym walls.

The cast of players changes from season to season, yet the small town of just about 6,000 people on the shores of Lake Ontario continues to churn out girls basketball talent at a rate never before seen at the school.

“I had two eighth-grade girls come up to me the other day and say that their goal when they become varsity players is to make it to Buff State and have the success the team had this year,” Baker said. “For me to hear that as a teacher and a coach is probably the happiest moment you can have.”

Rachel Senek and Kayla Neumann were once just like those two girls.

The senior duo starred this season in leading Wilson to a 20-4 record and the Class B-2 title, its first sectional championship since 2014 when they were freshmen. The guards went from being depth players that year to turning in two of the top seasons in school history their senior year.

Senek scored a single-season record 500 points to finish second on the all-time scoring list with 1,148 points, just the second player to surpass the 1,000-point plateau at Wilson. She scored 20.8 points per game, shooting 55.7 percent from the field and 82.7 percent from the free-throw line, all No. 1 in school history. The point guard’s 100 assists and 42 three-pointers this season ranked second. 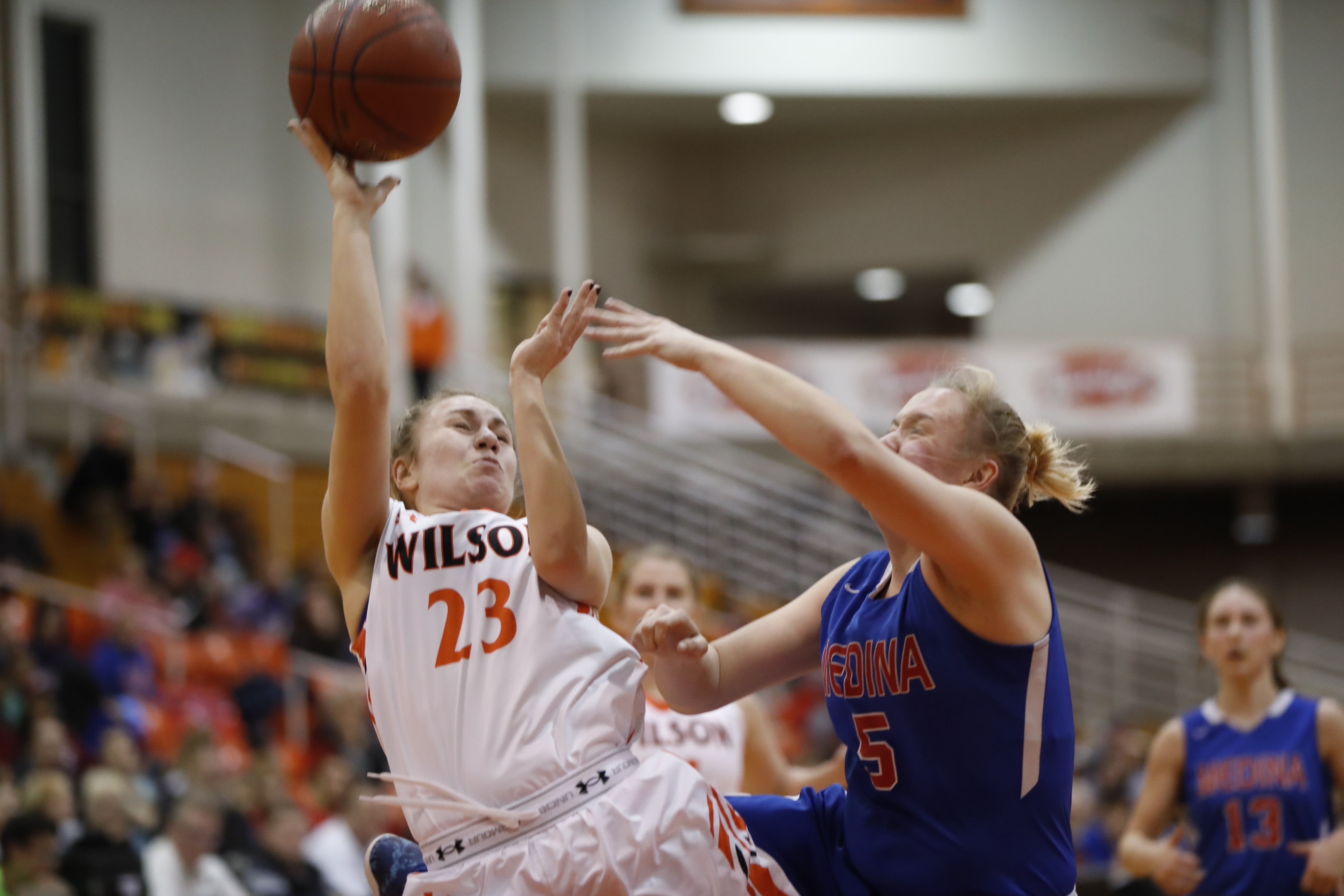 Wilson's Rachel Senek shoots against Medina during the Class B-2 final at Buffalo State on March 5. Senek finished her career with 1,148 points, second all time at the school to 2003 grad Jamie Feagin (1,262). (Harry Scull Jr./Buffalo News)

Neumann, meanwhile, scored 329 points this season to finish with 808, good for third and fifth all time, respectively. Her average of 13.7 points per game ranks sixth and her 78.2 free-throw percentage third for a single season.

Whether it be Senek, Neumann or other players such as Jamie Feagin or one of the Curry sisters, the Lakewomen have never had a problem developing top-end talent. But Baker thinks that it’s the team chemistry from the top of the roster to the bottom that makes a big difference.

“One of the things I’ve noticed with the basketball teams and sports in general as a small community is, these kids are best friends,” Baker said. “There’s no cliques, no animosity, no problems in the locker room because they’re so tightly niched like family. That’s what sets us apart.”

Having a solid youth program has been a huge part of that. Baker, an art teacher in the middle school, is able to watch kids mature through the system.

“I think that winning breeds winners,” Baker said. “We have a great problem that we have more kids trying out for the team than we have uniforms. Which is at the same time unfortunate, but we’re hopefully going to help that problem by adding another modified team.”

Players growing up through the program have witnessed plenty of winning in the last few years.

“Obviously as a coach and players, we don’t ever want to lose, but I think it was actually a good loss and at a good point in the season,” Baker said. “It helped us put everything back into perspective and refocus our goals. And it did a really good job of resetting us because of how far we ended up going.”

While the sectional titles are nice, the next step for Wilson is a trip to the Far West Regionals. Baker’s teams are 0-5 in regional qualifiers, including a 53-47 loss to state semifinalist Fredonia on March 8. He thinks additional work in the offseason is one of the ways the Lakewomen can take that next step. 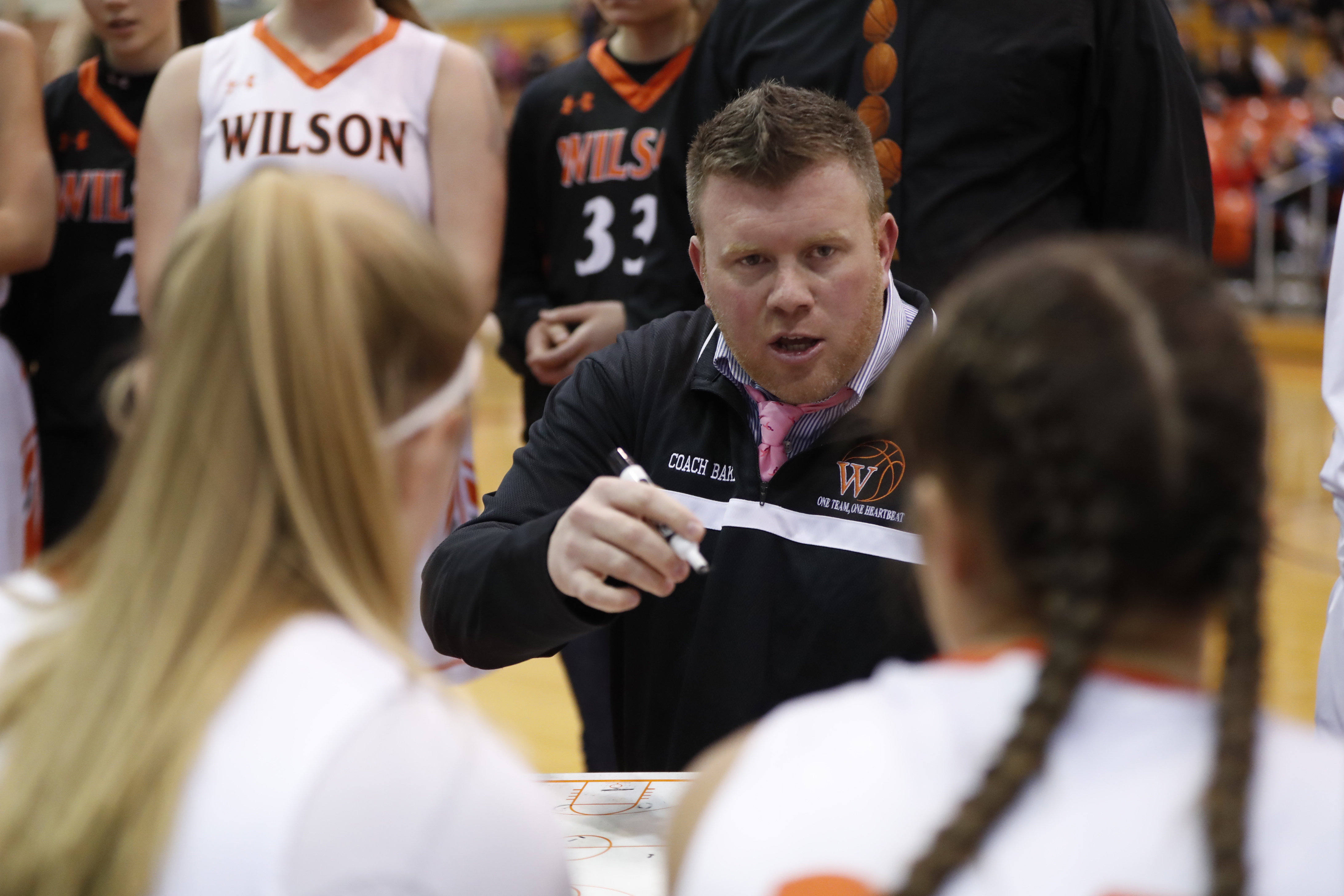 “Not just basketballwise, but liftingwise, we gotta do a better job as a program,” Baker said.

“It’s gotta start younger. Promote the weight room like it’s important to be in. Some girls look at the weight room and cringe because they don’t want to look like the Hulk. They don’t understand that by improving core strength, improving foot speed … that puts you above the competition.”

That offseason work is becoming more and more important with the improvement of the rest of the league. Medina is on the upswing, with a talented young roster, and Albion and Newfane were ranked among the Top 10 small schools in Western New York this year.

“I always believed that on the boys and girls side, there are some of the best coaching minds in Western New York,” Baker said. “If you look back at the sectional finals or semifinals the last 10 years or so, there has been at least one N-O team if not two every year. This year was very special, having two N-O teams in the B-2 finals at Buffalo State.”

With Senek, Neumann and fellow seniors Jen Darlak and Alex Seeley graduating, it’s going to take a bit of a reinventing for the Lakewomen to make a return trip to Elmwood Avenue next year.

"Well, we’re losing 90 percent of scoring from this year, and I’m wondering how we’re going to make it out and perform next year,” Baker said. “I think bringing up younger players to learn from the older players this year will help that transition.”

Just like Baker did with Senek and Neumann in their freshman years, he brought up freshmen Skylar Munnikhuysen and Anna Frerichs this season.

“They didn’t get the minutes they maybe wanted to,” Baker said, “but they were able to learn and groom under our senior leaders, which has really helped us in the past.”

Baker acknowledges that “we got some work to do, some holes we have to fill. We’re losing two starting guards, but that’s just the way our program worked out. I’m just hoping that it’s their time.”