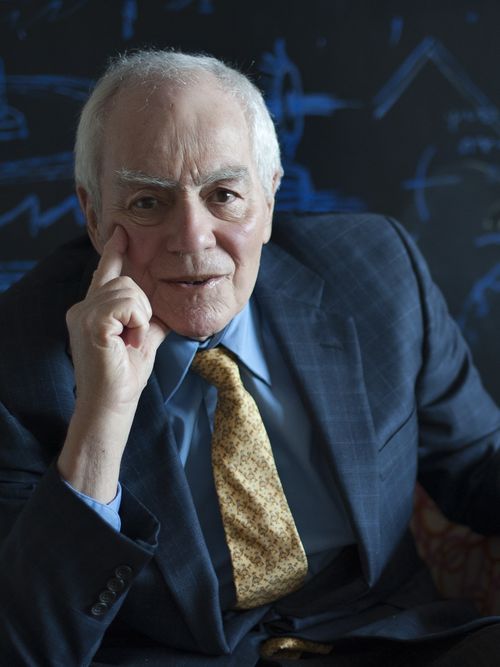 NEW YORK – Jimmy Breslin, the New York City newspaper columnist and best-selling author who leveled the powerful and elevated the powerless for more than 50 years with brick-hard words and a jagged-glass wit, died on Sunday at his home in Manhattan. He was 88, and until very recently, was still pushing somebody’s buttons with two-finger jabs at his keyboard.

His death was confirmed by his wife, Ronnie Eldridge, a prominent Democratic politician in Manhattan. Breslin had been recovering from pneumonia.

With prose that was savagely funny, deceptively simple and poorly imitated, Breslin created his own distinct rhythm in the hurly-burly music of newspapers. Here, for example, is how he described Clifton Pollard, the man who dug President John F. Kennedy’s grave, in a celebrated column from 1963 that sent legions of journalists to find their “gravedigger”:

“Pollard is forty-two. He is a slim man with a mustache who was born in Pittsburgh and served as a private in the 352nd Engineers battalion in Burma in World War II. He is an equipment operator, grade 10, which means he gets $3.01 an hour. One of the last to serve John Fitzgerald Kennedy, who was the thirty-fifth President of this country, was a working man who earns $3.01 an hour and said it was an honor to dig the grave.”

Here is how, in one of the columns that won the 1986 Pulitzer Prize for commentary, he focused on a single man, David Camacho, to humanize the AIDS epidemic, which was widely misunderstood at the time:

“He had two good weeks in July and then the fever returned and he was back in the hospital for half of last August. He got out again and returned to Eighth Street. The date this time doesn’t count. By now, he measured nothing around him. Week, month, day, night, summer heat, fall chill, the color of the sky, the sound of the street, clothes, music, lights, wealth dwindled in meaning.”

And here is how he described what motivated Breslin the writer: “Rage is the only quality which has kept me, or anybody I have ever studied, writing columns for newspapers.”

Poetic and profane, softhearted and unforgiving, Breslin inspired every emotion but indifference; letters from outraged readers gladdened his heart. He often went after his own, from Irish-Americans with “shopping-center faces” who had forgotten their hardscrabble roots to the Catholic Church, whose sex scandals prompted him to write an angry book called “The Church That Forgot Christ,” published in 2004. It ends with a cheeky vow to start a new church that would demand more low-income housing and better posture.

Love or loathe him, none could deny Breslin’s enduring impact on the craft of narrative nonfiction. He often explained that he merely applied a sports writer’s visual sensibility to the news columns. Avoid the scrum of journalists gathered around the winner, he would advise, and go directly to the loser’s locker. This is how you find your gravedigger.

“So you go to a big thing like this presidential assassination,” he said in an extended interview with The New York Times in 2006. “Well, you’re looking for the dressing room, that’s all. And I did. I went there automatic.” 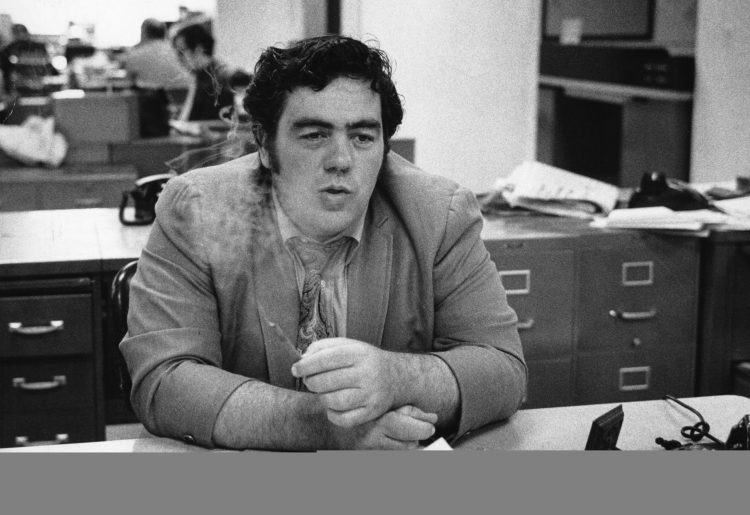 Jimmy Breslin in New York in 1970. Breslin, the New York City newspaper columnist and best-selling author who leveled the powerful and elevated the powerless for more than 50 years with brick-hard words and a jagged-glass wit, died on March 19, 2017, at his home in New York. He was 88. (Michael Evans/The New York Times)

Early on, Breslin developed the persona of the hard-drinking, dark-humored Everyman from Queens, so consumed by life’s injustices and his six children that he barely had time to comb his wild black mane. While this persona shared a beer with the truth, Breslin also admired Dostoyevsky, swam every day, hadn’t had a drink in more than 30 years, wrote a shelf-full of books, and adhered to a demanding work ethic that required his presence in the moment, from a civil rights march in Alabama to a “perp walk” in Brooklyn – no matter that he never learned to drive.

The real Jimmy Breslin was so elusive that even Breslin could not find him. “There have been many Jimmy Breslins because of all the people I identified with so much, turning me into them, or them into me, that I can’t explain one Jimmy Breslin,” he once wrote.

Sometimes he presented himself as a regular guy who churned out words for pay; other times he became the megalomaniacal stylist – “J.B. Number One,” he called himself – who was dogged by pale imitators with Irish surnames. On occasion he would wake up other reporters with telephone calls to say, simply, “I’m big.”

He cut long-standing ties over small slights, often published an annual list of “the people I’m not talking to this year,” and rarely hesitated to target powerful friends, depending on his depth of outrage and the number of hours until deadline. He would occasionally refer to those who had fallen out of his favor only by their initials.

After concluding that Gov. Hugh L. Carey of New York had become too enamored of fine living, for example, Breslin rechristened his old pal Society Carey, a nickname that stuck like gum on a handmade shoe. But when someone he knew was sick, whether a beloved daughter or the switchboard operator at work, Breslin would be at the bedside, offering his comforting gift of almost vaudevillian distraction.

A man whose preferred manner of discourse was a yell, Breslin could be unkind, even vicious. In 1990, for example, he was suspended by his employer, Newsday, for a racist rant about a female Asian-American reporter who had dared to criticize one of his columns as sexist.

At the same time, Breslin was unmatched in his attention to the poor and disenfranchised. If there is one hero in the Breslin canon, it is the single black mother, far removed from power, trying to make it through the week.

According to his wife, Eldridge, Breslin became so upset by what he had witnessed in the streets of the city, streets he knew as well as anyone, that he often needed time to recover after writing his column. “Bad news puts him to bed,” she said.

Breslin came honestly to his empathy and distrust. Born James Earle Breslin on Oct. 17, 1928, he grew up in the Richmond Hill section of Queens. When Jimmy was 6, his father, James, a musician, deserted the family, leaving him to share an apartment with an emotionally distant mother, Frances – a supervisor in the East Harlem office of the city’s welfare department who drank – as well as a younger sister, a grandmother and various aunts and uncles.

Breslin found early escape in newspapers. After getting a job as a sports writer for The New York Journal-American, Breslin wrote a freshly funny book about the first season of the hapless New York Mets, “Can’t Anybody Here Play This Game?” It persuaded John Hay Whitney, the publisher of The New York Herald Tribune, to hire him as a news columnist in 1963.

Soon Breslin was counted among the writers credited with inventing “New Journalism,” in which novelistic techniques are used to inject immediacy and narrative tension into the news. (Breslin, an admirer of sports writers like Jimmy Cannon and Frank Graham, scoffed at this supposed contribution, saying that he and others had merely introduced Dickens-like storytelling to a new generation.)

Unleashed, Breslin issued regular dispatches that changed the craft of column writing, said journalist and author Pete Hamill, a former colleague. “It seemed so new and original,” Hamill said. “It was a very, very important moment in New York journalism, and in national journalism.”

Breslin wrote about President Kennedy’s gravedigger, the sentencing of the union gangster Anthony Provenzano, the assassination of Malcolm X, and a stable of New York characters real and loosely based on reality, including the Mafia boss Un Occhio, the arsonist Marvin the Torch, the bookie Fat Thomas and Klein the lawyer. But Breslin’s greatest character was himself: the outer-borough boulevardier of bilious persuasion, often chaperoned by his superhumanly patient first wife, “the former Rosemary Dattolico.”

Over the years, Breslin would leave daily newspapers in search of better pay. In 1969, for example, he resigned from The New York Post after writing his first novel, “The Gang That Couldn’t Shoot Straight,” a best-selling satire about the Mafia that was later made into a forgettable movie. But he repeatedly succumbed to the sirens of daily journalism, first at The Daily News, then at New York Newsday, then at Newsday on Long Island, then back to The Daily News.

“Once you get back in the newspapers, it’s like heroin,” Breslin told The Times. “You’re there. That’s all.”