Three years after taking over the sprawling former hospital property at Gates Circle with plans for an ambitious residential project, TM Montante Development is bringing in a Rochester apartment manager and developer to turn the concept into reality.

Thomas Montante's firm is teaming up with Robert C. Morgan, whose Pittsford-based company owns more than 180 properties in 14 states.

The two developers will work together to create Montante's proposed Lancaster Square at Gates Circle, which envisions more than 500 apartments, townhomes and condominiums – plus neighborhood retail and commercial office space – on the site formerly occupied by Millard Fillmore Gates Circle Hospital.

"This is such a big transformational project, that we always knew it was going to be important for us to bring in the right partner to be able to truly transform the site and move forward with our vision for the development," said TM Montante President Christian Campos.

The joint venture will mark the biggest and most visible initiative in Buffalo to date by Morgan Communities. It will give Montante – a much smaller developer by comparison – better access to the financing he needs as he prepares to submit his first building to the city Planning Board in the coming weeks.

The multi-year project is designed to produce a new mixed-use, urban neighborhood – complete with a fitness center, a grocery and  new streets. It's estimated to cost more than $110 million, not including the $41 million Canterbury Woods senior-living facility now under construction with 53 independent-living and five assisted-living units. 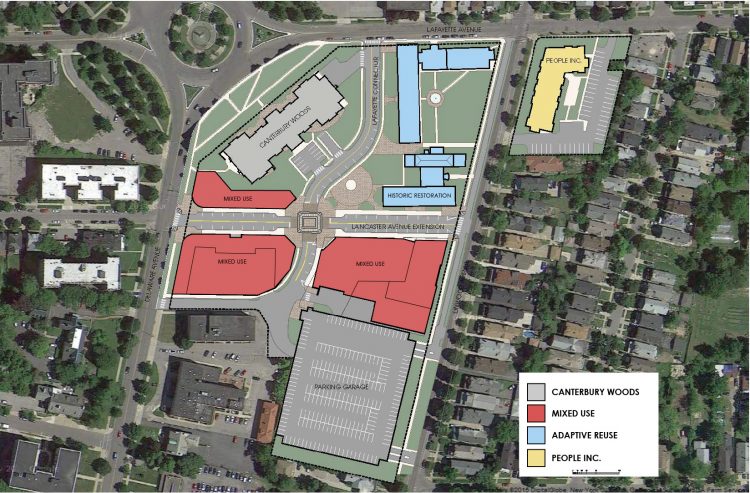 Montante on Friday sold its Gates Circle properties at 1285, 1291 and 1299 Delaware Avenue, 865 Lafayette Avenue and 630 Linwood Avenue to a new equal joint-venture called Montante/Morgan Gates Circle LLC, which is registered to Morgan's Pittsford headquarters. The purchase price was $4.7 million, according to Erie County Clerk records.

“The trend for major development projects in Buffalo and nationally is for developers to work in partnership to bring greater resources to the table,” said Matthew Montante, chief operating officer of his father's company.

Before choosing Morgan, Montante said his company "took great care and diligence" in evaluating a partnership with another developer and also considered how to best use a joint venture to advance the project. The two developers were introduced to each other by a mutual personal friend and discussions began last summer.

“While several development groups approached us about collaborating on the Lancaster Square project, we felt that Morgan Communities shared our vision for design and neighborhood connectivity," Montante said.

Campos noted that while the two developers have some overlap in skills and experience, there are also many areas in which they each bring something different to the table. "What evolved was a partnership that really made sense for both companies to take on the transformation of Gates Circle," Campos said. "It's just a great fit between the two."

"We've been looking at Buffalo as a market that we really wanted to do a project in, and we've looked at a lot of the different sites in the city, and really felt like Gates Circle was the best fit for us," said Kevin Morgan, vice president of Morgan Communities, and nephew of the company's CEO. "We love the location. We like the proximity to the Elmwood Village. We like the proximity to the medical campus. We feel like it's walkable."

Morgan Communities, owned by Morgan Management, is a family-owned real estate company that invests in apartments, manufactured housing, recreational vehicle housing and self-storage facilities around the country. Founded in 1979, the company currently owns more than 32,000 units, with particular concentrations in the Rochester and Pittsburgh markets.

The firm has already completed urban redevelopment projects in historic parts of Pittsburgh, Cleveland and Rochester, including the Eastside Bond Apartments in Pittsburgh and the transformation of the former Midtown Tower in Rochester into the mixed-use Tower 280. 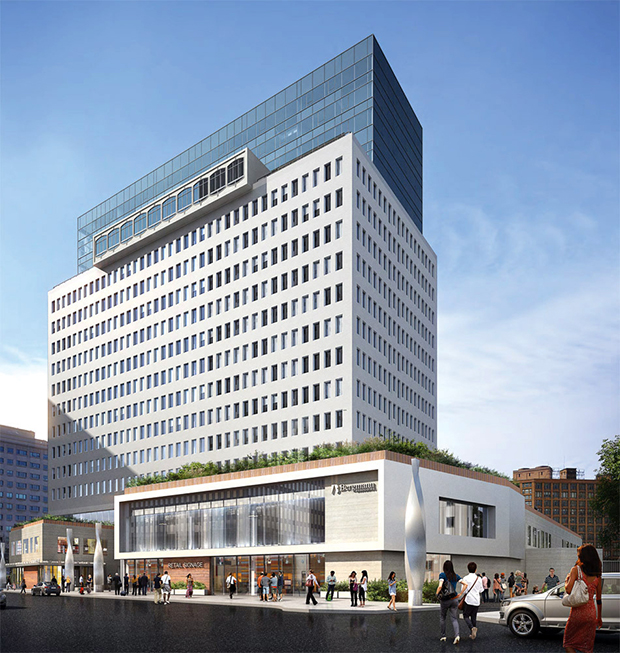 This will be the firm's first major venture in Buffalo, although Morgan already owns and operates several apartment complexes in Buffalo and its suburbs, including Raintree Island and Paradise Lane in Tonawanda, Maplewood Estates in Hamburg, Idlewood Apartments in Cheektowaga, and Green Lakes Apartments in Orchard Park. In all, the firm has about 4,000 units in and around Buffalo, including many owned in partnership with Glendale Development's Matthew Cherry.

It also bid for One Seneca Tower early in the foreclosure process, but backed away before Douglas Jemal's Douglas Development Corp. emerged last summer as the buyer.

The announcement comes just three weeks after Montante unveiled its first proposed new building for the site, a six-story apartment building with retail space on the northeast corner of Delaware and Lancaster avenues. Plans tentatively call for at least three retail spaces on the first floor, such as for a restaurant or cafe, with the one- and two-bedroom apartments upstairs. Details are still being finalized, and Montante expects to submit the proposal for municipal review in the spring.

Montante has been working for three years to reuse the 6.7-acre hospital site, which it acquired from Kaleida Health after the hospital was closed and consolidated downtown to the Gates Vascular Institute. The former buildings have already been demolished – including the implosion of the 11-story main hospital – and crews have since focused on clearing, cleaning up and preparing the site for redevelopment, which is expected to last five to seven years. 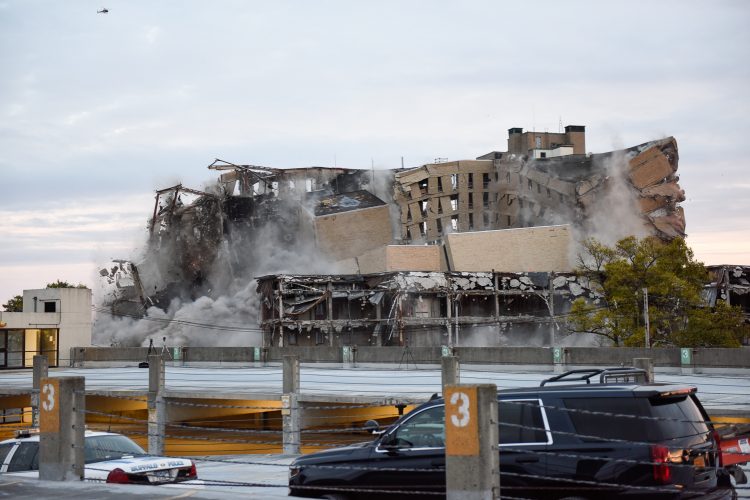 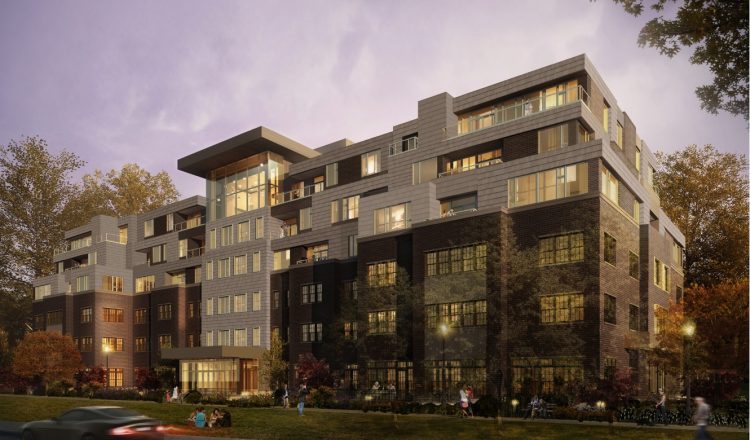 Rendering of the proposed Canterbury Woods at Gates Circle.

"What we have is the progress we've demonstrated over the last several years," Campos said. "Then over the next year and beyond, you will see tremendous progress building on the momentum we've established on the site." 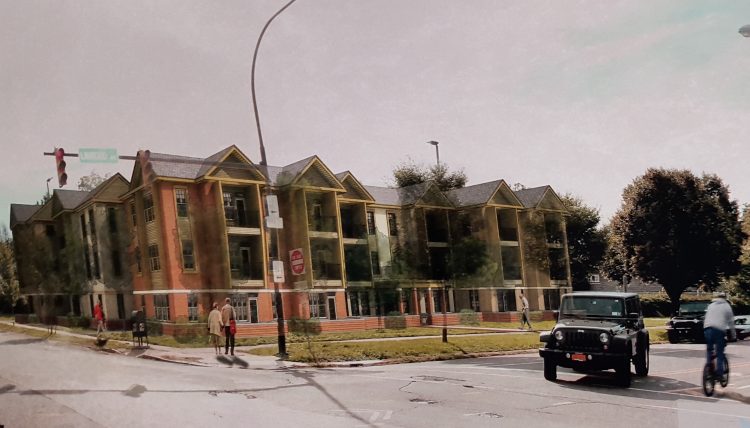