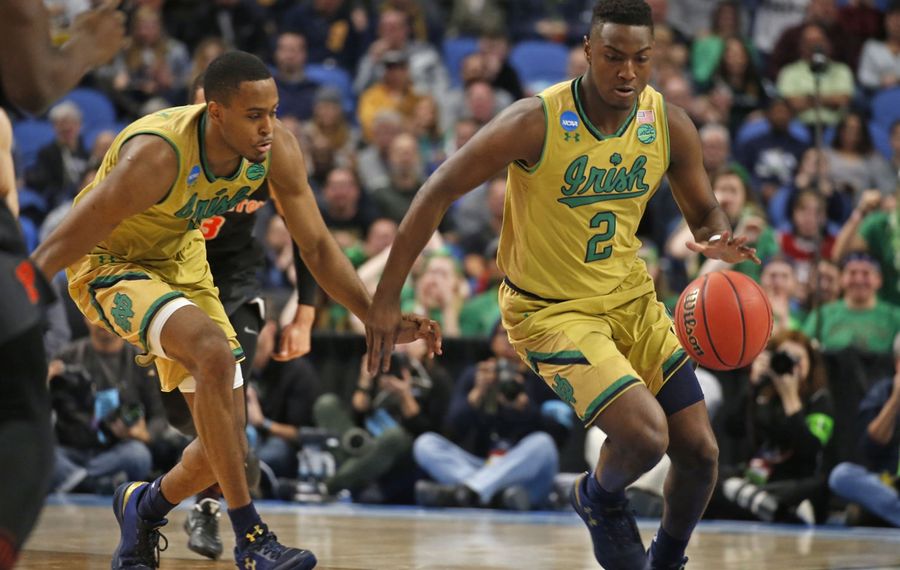 West Virginia and Notre Dame will play to their strengths. Whoever does it better will keep dancing – and hear about it from their fans.

Here are Five Things to Know as the No. 4 Mountaineers face the No. 5 Fighting Irish on Saturday in KeyBank Center.

1. Hot off the press

West Virginia’s full-court defense is the most aggressive in the country, leading the NCAA in turnovers forced and steals.

“It's going to be another fun game in March.”

Farrell and fellow Fighting Irish ball-handlers Steve Vasturia and Rex Pflueger are among the best in avoiding turnovers. Notre Dame (26-9) will force the Mountaineers (27-8) to press even harder than usual.

“If you don't play with a lot of energy and a lot of enthusiasm the way we play, you get exposed,” West Virginia coach Bob Huggins said. “We've got to cover a whole lot more ground than everybody else does because we're playing the length of the floor when everybody else is playing a half court. Energy and enthusiasm are incredibly important us.”

Notre Dame and West Virginia have a long history. The former members of the Big East made regular trips to the other school’s campus.

It should make for entertaining catcalls from the fans.

“My memory is how hard the Mountaineer crowd is on us,” Irish coach Mike Brey said. “It is one of the most brutal … I have heard some of the most unbelievable stuff. What I'll do is turn to my assistant and say, ‘God, that was a good one. He really ripped me on that one.’”

3. Notre Dame is looking for history …

The senior class of Vasturia and forwards V.J. Beachem and Austin Torres has combined for 97 victories during its four-year career. One more will pass the 2013 class for most in school history. The trio has also won seven NCAA Tournament games, tied for the most with the Class of 1979.

“I’m just trying to enjoy it and soak up all the experience of the NCAA Tournament,” Vasturia said. “I've been lucky to be here the past three years. Coach Brey always talks about not to take it for granted. Not everybody has an opportunity to play in the tournament.

“We've had a couple good runs. It's been a great season. We've had a lot of huge wins. I just want to continue to play as long as I can.”

With the defense that leads to offense, the Mountaineers have scored 2,873 points this season. When they score their 12th point during the first half, they’ll pass the school record of 2,884. It was set way back in 1959 when Jerry West led West Virginia.

“Our game's about numbers,” Huggins said. “One-on-zero is the best number, and we are generally pretty good at those. Then, you know, two-on-one and three-on-two we're not quite as good at.”

Junior guard Jevon Carter paces the Mountaineers at 13 points per game, but he’s got help. Six other players average at least six points per outing.

“If we come out and do what we're supposed to do, just do what all our coaches ask us to do and everything, I feel like everything will take care of itself,” junior forward Elijah Macon said.

Though West Virginia is perfect in Buffalo with a 3-0 record in tournament games, it’s the Irish who are the attraction. Much like the New York Yankees, Notre Dame is an easy team to love or hate.

“We feed off the fans' energy during the game,” forward Bonzie Colson said. “It's great when we're getting ready for the game, heading to the bus and the band's playing our fight song, and the fans are cheering and clapping. I think that gets us motivated and gives us a lot of energy to play well.”

Energy, of course, flows both ways. When Princeton had the final shot Thursday and a chance to win the opener of the West Bracket, Notre Dame was the enemy.

“A lot of people seemed to be pulling for the upset,” Farrell said, “but we love our crowds. They always travel well. They're always really supportive.”

Fighting Irish fans and St. Patty's Day: 'We have some extra bail money just to make sure we can get them out'