WASHINGTON – President Trump looked to the Rust Belt for the votes that got him elected, but the budget proposal he released early Thursday looks as if it would result in a massive movement of federal funds away from the region and toward states with a bigger military presence.

The Low Income Home Energy Assistance Program -- which helps heat the homes of nearly 100,000 families in Erie County, along with millions more across the Rust Belt -- would be eliminated under Trump's budget.

So would the Great Lakes Restoration Initiative and the Community Development Block Grant program.

Meanwhile, medical research and several other domestic programs are set to be slashed.

All those programs are important to the Buffalo area as well as Pennsylvania, Ohio, Michigan and Wisconsin – states that powered Trump's electoral victory.

The military – which has a comparatively small presence in New York and the Great Lakes states but a strong footprint in the South and West– is set to get a historic $54 billion increase. Budget experts said that increase is most likely to help the states that already benefit most from military spending, such as Virginia, Hawaii and Alabama.

Other preliminary budget documents show that Trump plans to fund the start of his wall at the Mexican border in part with funds culled from the Coast Guard, which employs 6,000 throughout the Great Lakes basin. 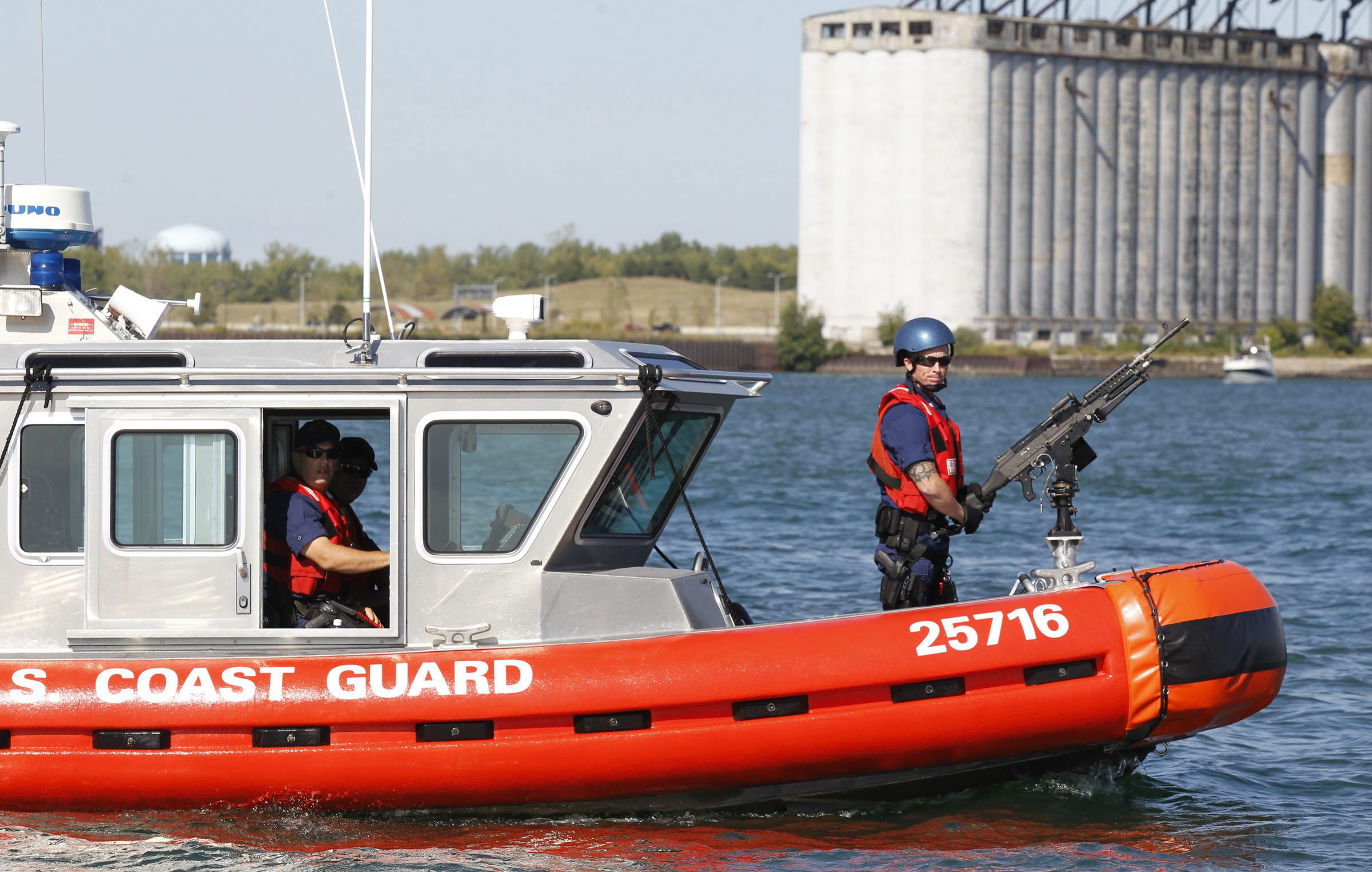 The Trump administration budget plan would decrease funding to the U.S. Coast Guard, which employs some 6,000 throughout the Great Lakes Basin. (Harry Scull Jr. / Buffalo News}

Adding it all up, Niagara Falls Mayor Paul Dyster said the Trump budget plan can be read in two ways.

"It can be read as a regional shift of resources from one part of the country to another," said Dyster, who is no fan of the Trump proposals. "And it can also be seen as a shift from one set of priorities that were seen as important to another."

A budget is largely a statement of a president's priorities, and Trump's are vastly different than those of former President Barack Obama, who supported social programs, spearheaded the Great Lakes Restoration Initiative and agreed to defense budget cutbacks during his eight years as president. In their place are the plans of a new president who puts security first.

"The president ran very, very clearly on priorities," Trump's budget director, Mick Mulvaney, said on conservative talk show host Hugh Hewitt's radio show recently. "And the priorities are spending money at home on national defense, on border control, on immigration enforcement, on enforcing the laws generally that are already on the books."

And with those priorities ranking at the top of the president's agenda, other things will have to give way, said Gary Cohn, director of the National Economic Council.

"Unfortunately, we have no alternative but to reinvest in our military and make ourselves a military power once again," Cohn said this week on "Fox News Sunday. "If you’re doing that in an area where you have to balance the budget and you cannot create a further deficit, you have to make cuts."

Buffalo Mayor Byron W. Brown doesn't think much of the spending plan Trump has been putting together. He said the city could end up losing money, not just from the Community Development Block Grant, but also from economic development aid and other federal programs.

"I am absolutely opposed to the cuts that are being proposed by the White House and feel strongly that this very significant increase in defense will not have a beneficial impact in our city," Brown said. "It will have a detrimental effect at a time when Buffalo is rising, when there is a real economic transformation in this community."

Other urban communities in the region will suffer, too, under Trump's plan, said Rep. Brian Higgins, D-Buffalo.

"He misled the American people" about his budget plans, Higgins said of the president. "This budget looks like an assault on middle America."

Trump's spending plan certainly is a cut to "LIHEAP," the Low Income Home Energy Assistance Program that millions of poor people in Northern states rely on for their wintertime heating.

Trump's spending plan proposes to eliminate that program, saying: "LIHEAP is a lower-impact program and is unable to demonstrate strong performance outcomes."

But lawmakers from Northern states have consistently fought smaller cuts in the program in previous federal budgets -- and have almost always won. Members of Congress from New York have often played key roles in those earlier fights, saying the program is essential to heating the homes of the state's poorest residents.

Trump's call to eliminate the program -- if approved by Congress -- would not take effect until next winter.

The president also called for eliminating the Great Lakes Restoration Initiative, which funded the Buffalo River cleanup that led to the riverfront's revival as a place to live, play and work. Trump would also eliminate a similar effort to clean up the Chesapeake Bay.

Those programs would end as part of a 31 percent budget cut at the Environmental Protection Agency.

"The budget returns the responsibility for funding local environmental efforts and programs to state and local entities, allowing EPA to focus on its highest national priorities," the Trump budget document said.

Without more federal Great Lakes funding, the cleanup likely would not be extended to other local places that need it, such as the Niagara River, Scajaquada Creek and Cayuga Creek, said Jill Jedlicka, executive director of Buffalo Niagara Riverkeeper.

Cities across the region – including many, such as Buffalo, that have shrunk over the years – have long relied on the Community Development Block Grant as their one reliable source of federal funds. Buffalo-area municipalities will get more than $21 million under the program this year, including $12.5 million for the City of Buffalo.

Cities use that money in a variety of ways. Buffalo often uses it for neighborhood development projects, whereas Dyster said Niagara Falls uses this funding for its after-school programs and housing stabilization.

"It's achieved a vast amount of good," said Dyster, adding that such projects likely won't get done if Trump gets his way and the program is eliminated.

That's just one of several proposed cuts that could hurt big cities with large poor populations that are strung along the Great Lakes. Early projections show a 14 percent cut in funding at the Department of Housing and Urban Development, with funds for public housing expected to take the worst hit.

Public transit funding is expected to be cut as well.

Funding would shrink, too, for the National Institutes of Health, which provided $96 million in research funding this year for the Roswell Park Cancer Institute, the University at Buffalo and other institutions at the Buffalo Niagara Medical Campus.

"All that research funding adds up to one thing: jobs for people living in downtown Buffalo," he said.

Trump is proposing such wide-ranging cuts in domestic spending for one reason, one observer said.

"If you're going to spend $54 billion more for defense, you're going to have to cut an awful lot out," said Michael Goff, president and CEO of the Northeast-Midwest Institute, which represents Rust Belt interests in Washington.

Trump aides insist, though, that they need to significantly boost defense spending because the U.S. military fell behind under strict budget limits the Republicans agreed to with Obama.

"He left us with a military that is, you know, woefully underprepared," Mulvaney told Hewitt.

Details of Trump's military buildup are yet to be announced, save for the president's call for a surge in shipbuilding that likely would benefit the states where ships are built, such as Maine and Virginia.

Of course, Buffalo's defense contractors could get a bit of a boost out of Trump's plan to increase military spending by about 10 percent. But that boost likely would be limited by the small size of the local defense contracting industry.

The nation's 50th largest metro area, Buffalo hasn't appeared in the federal government's list of 100 top metro areas for defense contracting since 2006, according to research by Chmura Economics and Analytics.

Similarly, Rust Belt states tend to get less than other states in defense spending. Research released this week by the Pew Charitable Trusts showed that Michigan had the lowest per-capita defense spending in the nation. New York ranked third from the bottom. Pennsylvania, Ohio and Wisconsin also ranked in the bottom half of states.

Defense spending doesn't move around much from state to state, said Anne Stauffer, author of the Pew report.

"It's safe to say that these kinds of changes take a while to occur," she said.

Instead, defense spending tends to stay in the states with the biggest or most military bases or defense contractors – which are, consequently, most likely to receive a boost under Trump's military buildup.

Of course, the southern border states –  especially Texas – will get an extraordinary boost if Congress approves Trump's plan for a wall at the U.S.-Mexico border.

Estimates for the cost of that wall generally start at $12 billion. And while Trump still insists Mexico will pay for the wall even though Mexico says it won't, early drafts of the president's budget show $2.6 billion going to the border wall.

"The President wants a little bit of money to start the wall, so we’re going to look at ways to save money elsewhere so we can get him that money," said Mulvaney, whose budget includes cuts to the Coast Guard, Federal Emergency Management Agency and Transportation Security Administration to fund the wall and other immigration enforcement initiatives.

That federal investment would be a big but temporary boost to the southern borderlands, said Ken Simonson, chief economist of the Associated General Contractors of America.

"You're putting that $12 billion into a very remote and underpopulated part of America," Simonson noted.

By way of contrast, that $12 billion price tag for the border wall is 40 times the recent annual federal investment in the Great Lakes under Obama.

Trump's budget, like those submitted by every president, must go through an arduous congressional approval process. Congress almost always makes big changes in a president's budget, and there are already signs that this will happen to Trump's plan, too.

Two of Trump's supporters -- Rep. Chris Collins, R-Clarence, and Rep. Tom Reed, R-Corning -- said they would oppose plans to cut Great Lakes funding, as well as other provisions of the Trump budget.

"I am unsure of the final numbers regarding the Great Lakes Restoration Initiative, but Western New Yorkers can rest assured I am monitoring the situation closely and will be ready to fight tooth and nail to protect the program’s funding,” Collins said prior to the release of Trump's budget proposal.

Collins also vowed to fight for substantial medical research funding for the Buffalo area, and said he has concerns about Trump's plans to trim the Coast Guard budget. Collins said, though, that he supports Trump's call for a big boost in funding for the military and to protect America's borders.

Meantime, Reed said he has been listening to mayors from across his district express concern about Trump's proposed budget cuts, and that he's prepared to fight for the funding the region needs.

"We're committed to the Great Lakes funding. We're committed to the Community Development Grant," said Reed. "This is a process. It's about priorities. And I can assure you that as New Yorkers, and in the Northeast as well as other areas, we'll look for allies to make sure that our priorities are addressed in the budget process."