March Madness isn’t the only hoops game in town this week.

Common Council President Darius G. Pridgen of the Ellicott District came up with the idea for the tournament and then teamed up with fellow Council Members Rasheed N.C. Wyatt of University, Ulysees O. Wingo Sr. of Masten and Richard A. Fontana of Lovejoy to help organize it.

Teams from the four districts will include students in grades 6 through 12 as well as one first responder – such as a police officer or firefighter. The first responders either will play on the teams or help coach the teams. 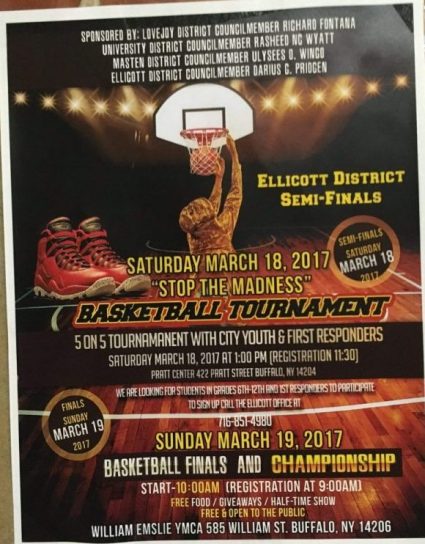 Organizers say the event creates a "huge" opportunity to make streets safer by empowering youth to say no to violence.

"It’s a community builder as opposed to officers being strangers," Fontana said. "Maybe a kid will see an officer on the street and remember they saw him at the tournament."

Pridgen, the long-time pastor of True Bethel Baptist Church, came up with the idea after realizing he has buried almost half of the city’s 15 homicide victims this year. Some weeks, he presided over two funerals in a row.

"It’s heartbreaking. What I kept seeing is some of the same young faces at the funeral, and I wanted to meet them at more places than a funeral," Pridgen explained.

At first he sponsored a dinner and conversation at the church in which the young men said they wanted more organized events they could participate in, Pridgen said.

Each participating Council member, except Fontana, will hold a game in their district on Saturday. The winners of those games will move onto the finals on Sunday, which will be held at 585 William St. Registration starts at 9 a.m. The two Lovejoy teams that Fontana is sponsoring will play on Sunday only.

During the tournament there will be giveaways, halftime shows and information on city services at the finals.

Registration begins at 11 a.m. for the Masten District games, which will be played at 877 E. Delavan Ave. Games start at 1 p.m. For more information, call Masten District office at 851-5145.

Registration for preliminary games in the University District begins at 11 a.m. with games starting at noon at 877 E. Delavan Ave. Contact Wyatt’s office at 851-5165 for more information.

The Lovejoy District will send two teams of 10 players each to participate in Sunday’s games. One team will have youngsters in 6th through 8th-grades. The other will be equipped with 9th through 12th graders.