Typically, the call would have come right around this time of year. The phone would always ring on a busy day in early March at the Buffalo Irish Center in South Buffalo, and Mary Heneghan, amid her duties, would pick it up.

The caller would be Joe Kelley, offering to help.

For decades, Kelley was part of the Irish Center fabric. He painted delicate Celtic knotwork on the walls. He salvaged a statue of St. Patrick that had been dumped in a field, somehow got it to the center and painted it by hand. He was a bartender there for many years. Even in his 80s, he’d volunteer to do whatever was needed amid the buildup to the day that meant the most to him of all:

“His name comes to mind,” Heneghan said, “as the season approaches.”

Yet Heneghan, chairwoman of the Irish Center, received no call this year. Joe Kelley died last September, at 87, of complications related to Alzheimer’s disease. This will be the first St. Patrick’s Day that Buffalo celebrates without him, and few in Western New York’s Irish-American community would dispute this point:

It is hard to imagine anyone understood the full meaning of the day better than Joe Kelley.

“Oh, my God, yes,” said his widow, Alice Kelley, who met Kelley in the Matthew Glab American Legion Post in Lackawanna, danced with him and then became his wife for 60 years. “He used to call the day the ‘glorious feast.’ ”

Grief and struggle were the bedrock on which Kelley built his life. His parents were Irish immigrants who moved to Buffalo from Baltimore, said Kelley’s daughter Maureen. They were broke, all but starving, during the Great Depression. When Kelley was “4 or 5,” they handed him over to an orphanage in Lackawanna operated by Nelson Baker, the legendary Catholic priest most often known simply as Father Baker.

Monsignor Paul Burkard, pastor at Our Lady of Victory National Shrine and Basilica in Lackawanna, said Kelley was one of the last surviving “Baker Boys,” the orphans who actually met Baker before his death in 1936. 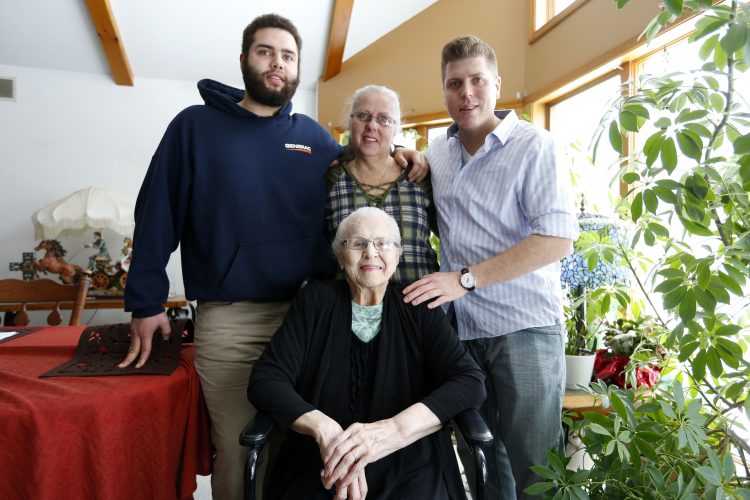 Joe Kelley's widow, Alice Kelley, with her daughter Maureen Kelley and grandsons Daniel Kelley, left, and Shawn Kelley, right, at Alice's home in East Aurora. Joe and Maureen Kelley were married 60 years. Their daughter Elaine could not be there for the photograph. (Mark Mulville/Buffalo News)

The orphanage held as many as 1,400 children at one time, Burkard said. Alice said her husband remembered the old priest interacting with the boys as they played in a courtyard. Kelley told his daughters, Maureen and Elaine, that his own father would sometimes come to a sidewalk outside the orphanage and put his hand through the fence to give the child a sock filled with pennies.

But Kelley’s father died in 1935, when the boy was 7. His mother showed almost no interest in her son; she soon vanished from his life. Lackawanna was the only home he really knew. The other orphans became his family. He turned to his Irish heritage as his identity, his soul, the core of who he was.

It would stay that way for another 80 years, until he died.

Mike Waltz, 62, who grew up at the orphanage and still works as a letter shop supervisor at Our Lady of Victory Homes of Charity, remembered Kelley from the days when he was a familiar bartender at a Lackawanna legion post, as “a guy everyone knew, a funny guy who told a lot of jokes.”

Within the lasting fraternity of those raised on the grounds, Kelley’s direct memory of Father Baker gave him a quiet distinction. “There aren’t many of them left,” Waltz said. “They’re kind of fading out.” 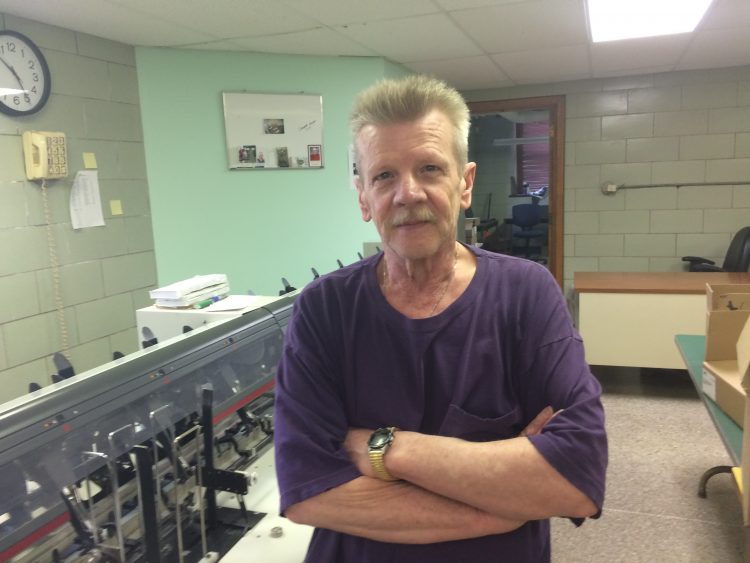 Jerry Janan, 82, also grew up in the orphanage. As far as he knows, the staff there came up with his last name. He followed the pattern of so many boys who walked those halls: Abandoned, wounded, he drew upon his friendship with the other orphans to somehow forge a life of meaning and significance.

Janan became a teacher, an educator. He also remained friends with Joe Kelley until the end, in no small part based on childhood loyalty:

“He was an older guy when we were there, and Joe was kind of my protector,” Janan said. He recalled one time when he set a metal bucket of water atop a door as a practical joke. The bucket fell directly onto a larger boy, who grabbed Janan and started pounding him, until Kelley stepped in.

“They went outside,” Janan said, “and started hitting each other hard, like I’d never seen two guys hit each other in my life.”

Janan never forgot it. The teenage Kelley later served as his sponsor for Confirmation, a Roman Catholic sacrament. Janan and Kelley stayed in touch for a lifetime. Toward the end, when Kelley’s disease grew worse, Janan and another grown “orphan,” retired firefighter Mike Frawley, often took their old friend out for breakfast.

“What we learned at the orphanage,” Frawley said, “was that you’d better respect people, no one owes you a living, and that you’re probably going to be on your own when you get out – so you’d better know how to survive.”

That meant putting their trust in one another. Joe Kelley, Frawley said, “was a very, very, charitable person, the kind of guy who’d help people out whenever he could.” Despite the pain and separation of his childhood, Maureen said she never saw her father “being mean to anyone.”

He worked harder than any man she ever met. He was a veteran who found a job with the South Buffalo Railroad and eventually retired from Bell Aerospace, successor to the Bell Aircraft Corp. Even when landscaping at home, Maureen said Kelley used to roll heavy stones around his East Aurora property with a metal bar he called his “magic wand,” raw toil that led his neighbors to call him “The Egyptian.”

It was the only way he knew of moving forward. His childhood wounds were compounded by loss throughout his life: Both his sons, Peter and Paul, struggled with illness and died before they reached middle age. 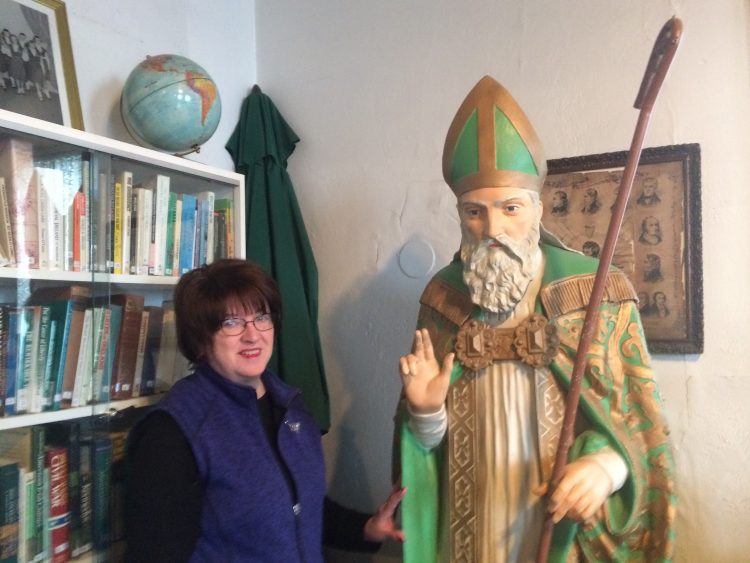 Mary Heneghan, chairperson of the Buffalo Irish Center, with the statue of St. Patrick saved and restored by Joe Kelley. (Sean Kirst/submitted image)

Still, he achieved quiet moments of triumphant joy. He always revered Nelson Baker and remained close to his fellow orphans. When Baker’s remains were moved in 1999 from Holy Cross Cemetery to Our Lady of Victory Basilica – a step in the effort to make Baker a Catholic saint – Kelley was one of the pall bearers.

He was also a founder of the “World’s Shortest St. Patrick’s Day Parade” in Lackawanna, the 98-step march every year from the basilica to Lackawanna City Hall. “He was one of my favorites, one of the originals,” said Michael J. Cusack, co-chairman of that event and the funeral director who eventually buried Kelley.

In 1990, on a day of particular meaning for his family, Kelley served as grand marshal of the Buffalo St. Patrick’s Day Parade. Brigid Knott, the parade’s chief of staff, said it was an honor he received for selfless dedication as a member of the executive committee. The guy once handed over to an orphanage waved to a big crowd as he wore a sash, as he walked alongside both his sons and a grandson, Shawn. 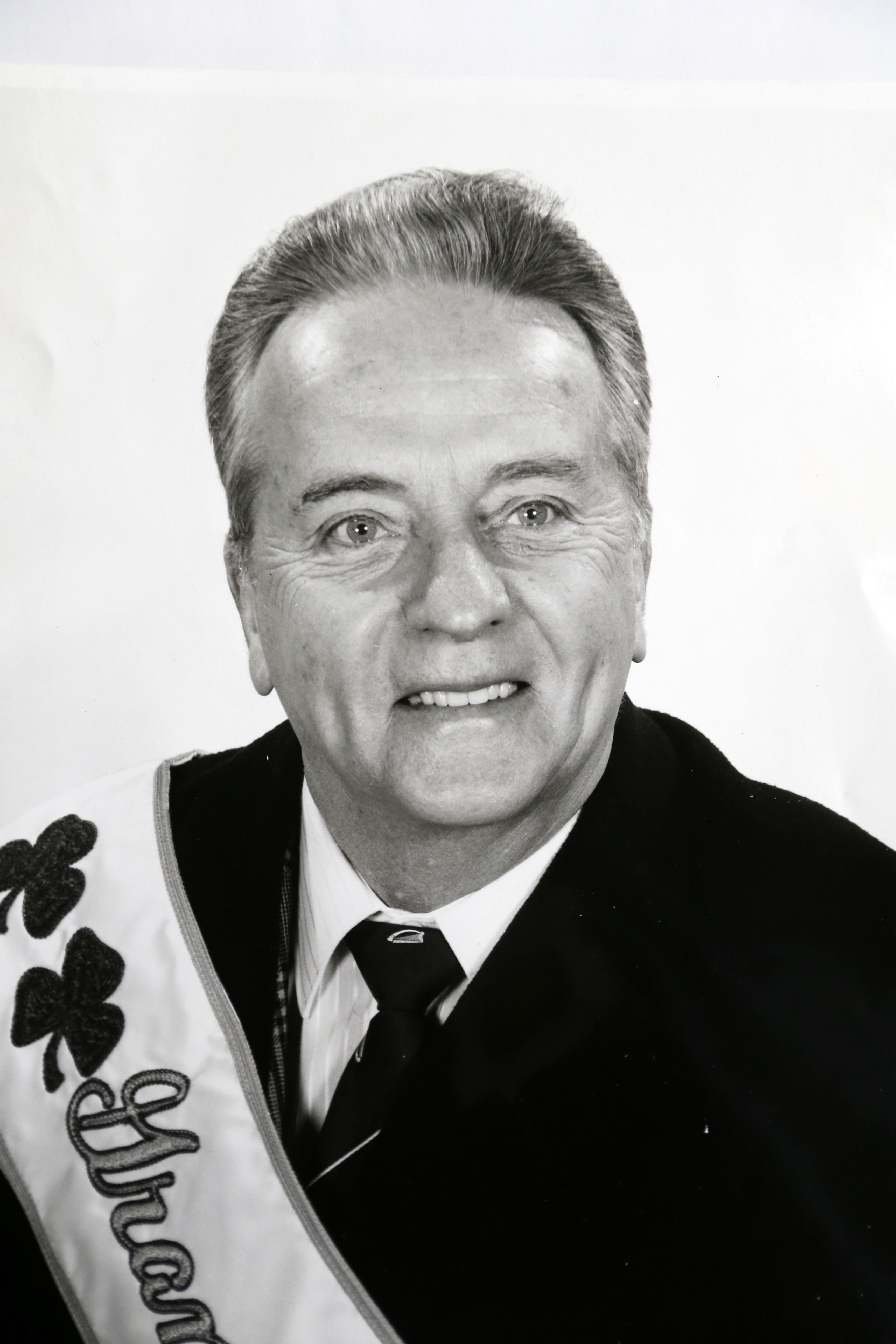 “To have his boys marching with him ...” Maureen said, and she had to let the sentence go unfinished. Her dad, she said, was a voracious reader who learned everything he could about Ireland, about the meaning of being Gaelic.

“I didn’t know anyone who didn’t like him,” Alice Kelley said of her husband, and Maureen said her father gave Alice deep love and loyalty.

“Even toward the end, with the Alzheimer’s, when he’d forget everyone else, he never forgot her,” Maureen said. “He’d still tell her every day how beautiful she was. Whatever he did, whatever job he started, I never saw him give up and say: I can’t.”

Years ago, he brought that philosophy to the statue of St. Patrick, left in an overgrown field along Division Street in Buffalo after the old St. Patrick’s Church was demolished. Kelley could not stand seeing it abandoned, left to crumble. He used a truck to rescue it from the elements. He labored over the statue, repairing every flaw and wound, until it went on display at the Irish Center in South Buffalo.

On this St. Patrick’s Day, it becomes his monument.

“There aren’t too many,” Alice said, “who were more Irish than Joe.”

Sean Kirst is a contributing columnist for The Buffalo News whose father grew up at Father Baker's orphanage. Leave your reflections on Joe Kelley as a comment following this piece, email them to seanpeterkirst@gmail.com or read more of Kirst's work in this archive.