How do you stop the wind from whipping around Buffalo's tallest building? Perhaps with a five-foot thick wall made of brick and metal panels that extends three stories high.

That's the plan of One Seneca Tower owner Douglas Jemal, after a wind tunnel test in Canada determined that the 38-story building needs a windscreen on the vast outdoor plaza that surrounds the Main Street tower and two connected buildings.

Jemal's Douglas Development Corp. will construct the windscreen between the west annex building and the tower as part of the company's $100 million plan to convert the plaza and two annex structures at the base of the tower into a residential and retail complex.

"We found that if we put up a wall between the annex building and the tower, we will help alleviate the nasty wind conditions that you experience as you walk across the plaza," said Elizabeth Fuller, an architect with Antunovich Associates, the Arlington, Va.-based design firm that typically works with Douglas Development on its projects.

Fuller noted that the wind on the site typically comes in from the lake, hits the tower and wraps around the corner, while also getting pushed down into the courtyard area, making it "windy all around." 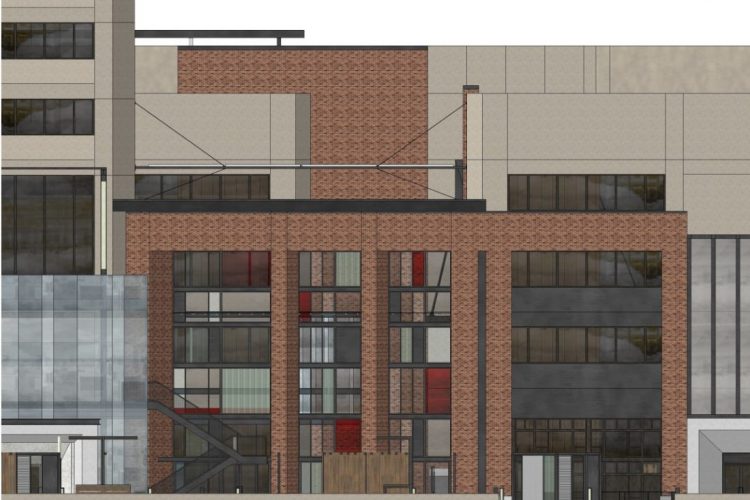 A rendering of exterior of One Seneca Tower with a proposed new wind screen. (Buffalo Planning Board)

The company's previously aired plans call for updating the look of the first few floors of the buildings with glass, brick-tile veneer, stucco and metal panels to create street-level storefronts. The company also plans to remake a section of the plaza to add a ramp that would allow cars to drive up to the entrance. 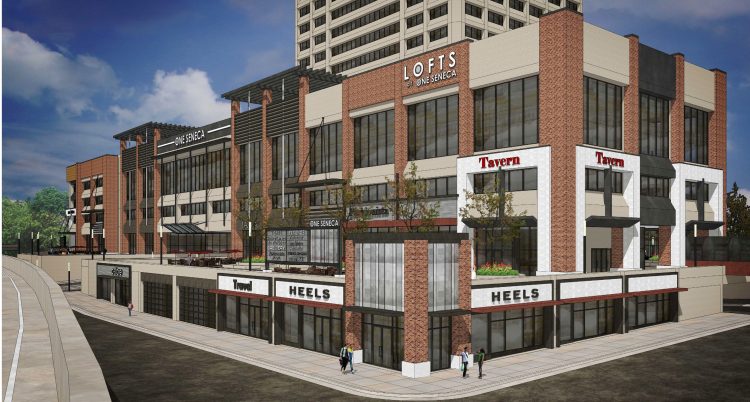 View from elevated highway at southeast corner of One Seneca Tower proposal.

But a newly updated design approved by the Buffalo Planning Board on Monday includes a new wall on the plaza meant to control the wind.

The wall will include glass-covered window openings for appearance and will be flush with the face of the two buildings so that it is indistinguishable from the rest of the facade.

The decision to add the screen followed tests conducted by Guelph, Ontario-based Novus Environmental at the University of Western Ontario in London, Ont.

The proposal for the Lofts @ Seneca One calls for more than 200 studio, one-bedroom and two-bedroom apartments, as well as a retail mall. The company will construct additional brick-and-concrete storefronts that will jut out from the concrete edifice, hosting some combination of restaurants, bars, coffee shops, a market, a fitness center, clothing stores and other establishments.

Work is slated to begin later this year. Meanwhile, Jemal has said he will tackle the upper floors of the tower later, although he has recently put out feelers to lease more than 600,000 square feet of upper-level space for commercial offices. 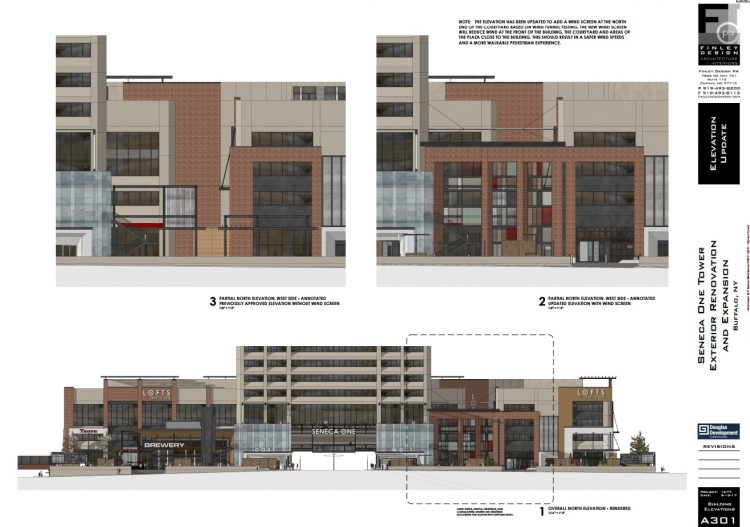 The wind in the outdoor plaza has long been seen as a challenge for attracting tenants and even visitors.

Besides the new screen, Fuller said, plans also call for canopy spaces and additional 10-foot high wind walls on the other side to "make it more friendly for pedestrians to walk around the tower."

The new barriers will be constructed this summer, along with other exterior improvements, Fuller said.

"I think it blends with the building very nicely," said Planning Board Vice Chair Cynthia Schwartz.