The 1,700 Erie County employees at the Rath Building have unwanted company – bed bugs.

Exterminators over three months have baited and sprayed eight floors of the downtown county office building after bed bug sightings. When a Comptroller's Office employee saw one crawling across her cubicle partition Friday, she called for help. Comptroller Stefan Mychajliw shut down his entire office for the day after completing payroll tasks that morning.

"Having bed bugs in the office is disgusting," Mychajliw said. "I erred on the side of caution."

County officials said the 16-floor Rath Building does not have an "infestation" of bed bugs. But with thousands of employees and members of the public coming and going through the building each day, some of these parasites are apparently hitching a ride into the building.

Dan Fitzgibbons, deputy commissioner for buildings and grounds, said the county has caught or identified about 10 bed bugs on different floors, with most employees seeing only one bed bug. Each time, he said, his department contacted Ashland Pest Control, which promptly dealt with the matter by baiting and spraying the areas.

The entire Rath Building was also shut down one weekend last month so that all of the building's elevators could be treated to keep the insects from migrating to other floors.

The Department of Social Services, which has the most interaction with the public, was among the first departments whose employees spotted the small, brown creatures in December.

"We're going to get the word out to everyone in the building," said Michele Weaver, who co-chairs the Civil Service Employees Association local committee for health and safety. 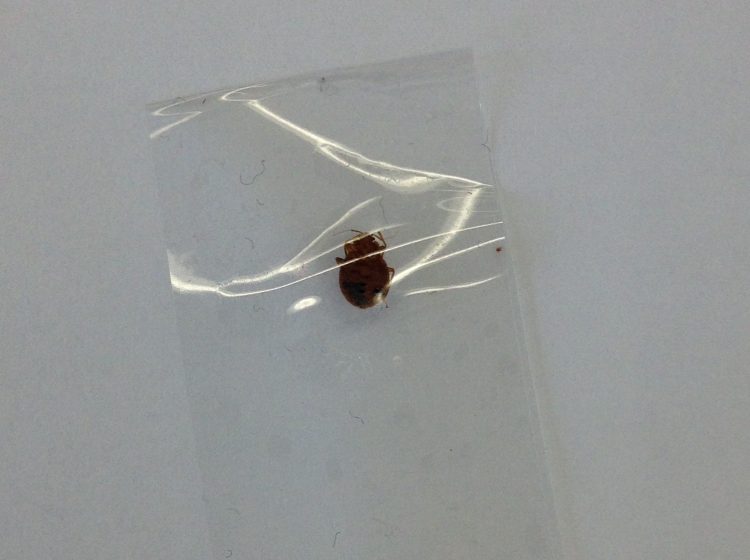 A bed bug captured in tape Friday in the Erie County Comptroller's Office.

Employees who find the insects have been advised to capture them by placing clear tape on them, then sealing the tape around them. Administrators don't want the bugs killed and smushed because that makes them harder to identify. In a few instances, employees have mistaken pieces of lint or an apple seed for bed bugs.

The clear tape procedure is exactly what was used in the Comptroller's Office. Scott Kroll, deputy comptroller for the audit division, said he stuck tape to the back of the bed bug and watched its legs flail until he sealed the tape around it. The taped-up parasite remains in an envelope on his desk, he said.

The Comptroller's Office routinely deals with the public, as well as staffers from all other county departments. So it's possible the bug may have come in with a visitor, not just migrated through the building, department officials said. The bug was found near an office receptionist counter.

Bed bugs are small, nocturnal, blood-sucking insects that can go for months between feedings. They typically hide during the day. Immature bed bugs are tiny, off-white creatures that can mature into brown insects up to a quarter-inch long. Bed bug bites are not distinguishable from other types of bug bites, which lead to a raised red bump and itchiness.

Buffalo ranks 18th among 50 major metropolitan areas for bed bug problems, according to Orkin pest control company, based on the company's home and commercial treatment data.

Because bed bugs are rarely out in the open during the day, employees have expressed concern that the few insects that have been spotted and caught in the building may mean many more bed bugs are actually present. But Fitzgibbons said that whenever a bed bug is spotted, Ashland Pest Control inspects the area before spraying and has not yet found any clusters of these parasites.

The pest control company has told the county that it does not believe the Rath Building has an infestation or that a building-wide extermination is necessary.

If it becomes necessary, however, the county will act, Fitzgibbons said.

"They have not recommended that yet, but we are looking into it," he said. 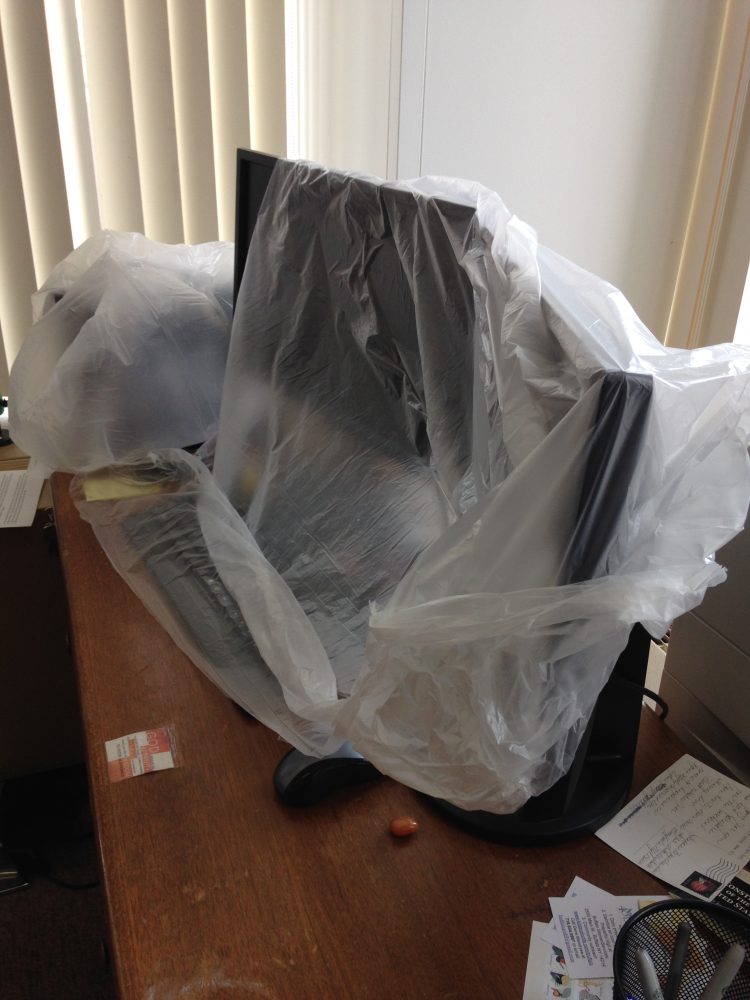 An office work station covered in anticipation of pesticide spraying for bed bugs in the Comptroller's Office.

"When they complain, it's looked into immediately," she said.

Though bed bugs are gross blood-eaters, they don't pose a major health threat and are less dangerous than other types of parasites. They transmit no viruses or diseases, and don't fly or jump. They are also incapable of climbing slick surfaces. Bed bugs on clothes or linens can also be killed when subjected to high heat, like in a clothes dryer.

Ashland Pest Control recommends employees remove clutter and excess personal items from office floors and under desks, where bed bugs are more likely to hide. Sensitive equipment and computers should also be covered if office treatment is necessary.