The above photo was taken from the passenger window of my car this morning, during the normally 15-minute drive into work that took 45 minutes.

First there was the creeping traffic on the normally slow-going Parkside Avenue, followed by the slippery drive on the Scajaquada (which is where the photo was taken) then on to the Kensington, which seemed as congested today as it does on days when school is in session even though city schools are closed today.

Here's part of a group email I received Monday:

"I have received multiple phone calls from residents complaining about visitors being ticketed in the neighborhood," a Fruit Belt resident and neighborhood advocate wrote.

"A few stories in particular that stand out are a mother of twins with special needs who receive therapy and the therapists are receiving parking tickets. Another is of a pastor who was visiting a friend in a clearly marked 'church van' that received a ticket," she wrote.

The next email, which again, I received as part of a group email, came Tuesday. It was from the city parking office:

"Our policy regarding visitors is that if you have a visitor coming to your house during the day, call 311 and let them know the Make and license plate of the vehicle (ex. Ford, ABC1234). That way our parking enforcers can be immediately notified not to ticket the vehicle in question."

"We’ve participated in multiple community meetings and it was decided this was the quickest, easiest way to let visitors park without receiving a ticket," the parking office email says.

Meet William M. Eberhardt, a former Buffalo Councilman who served as Council president from 1934-35, and therefore his oil-on-canvas portrait hangs in Council chambers. 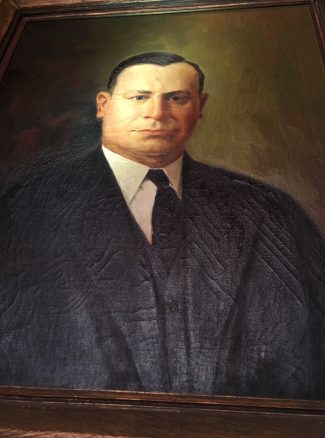 The current Council president, Darius Pridgen, wants this and any other cracking portraits in Council Chambers restored.

Eberhardt's portrait was painted in 1940 by Edward Riegel, who also painted portraits of two other Council Presidents and one former mayor.

Zoning Board meets this afternoon.