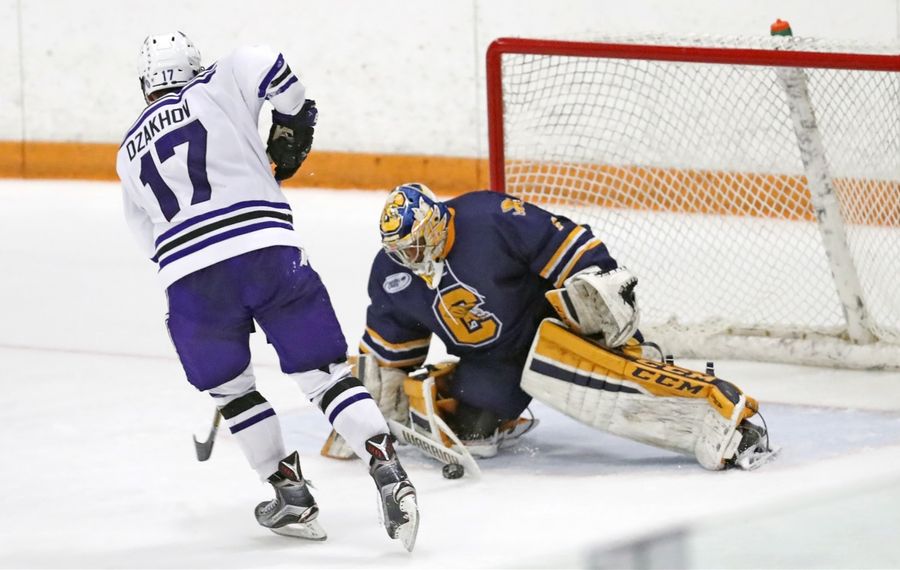 The Atlantic Hockey tournament has not been kind to the No. 1 seed.

The last time the top seed won the tournament was 2012, when Air Force captured both the regular-season and playoff title. In the 13 Atlantic Hockey tournaments, the No. 1 seed has won the title and gone on to the NCAA Tournament only five times.

So is it a good thing that the Canisius College Golden Griffins won the regular-season title and enter the final four of Atlantic Hockey as the No. 1 seed?

Well, to the Griffs, that No. 1 seed means only two things.

"It means we have the last change and we wear white," Canisius coach Dave Smith said.

"Our guys have the right mindset," Smith said. "It gives us the advantage in last change and we get to wear white jerseys. Nothing else. It's a new rink for everyone. Seeing the top seed in the past not survive, it's because the league is deep, the league is good and this is no different than any other weekend. Our approach isn't any different. It's let’s win Friday night."

Their opponent on Friday in the Atlantic Hockey semifinals in Rochester's Blue Cross Arena (4:30 p.m.) is fourth-seeded Robert Morris.

The Colonials (21-11-4) know a thing or two about the curse of the top seed. They won the regular season championship the last two seasons but lost to RIT in last year's championship game and fell to Mercyhurst in overtime in the 2015 semifinals.

Neither team had high outside expectations coming into the season. Canisius was picked ninth in the preseason coaches' poll while Robert Morris was sixth.

"Obviously the coaches got it wrong," Robert Morris coach Derek Schooley said. "What Canisius has done has been very impressive. You can't help but acknowledge that, but I think we've shown the last two years as the No. 1 seed anything can happen in Rochester in a one-game knock-out. Whoever plays the best game and whoever gets bounces, gets breaks, gets good goaltending -- you've got to get everything to advance, especially this year with the top four seeds."

No. 2 Air Force and No. 3 Army West Point meet in Friday's late semifinal, marking the first time since 2012 all top four seeds advanced to Rochester.

Robert Morris and Canisius met in the regular season back in October when the Griffs won three points with a 6-3 win on Oct. 21 and a 2-2 tie on Oct. 22 in HarborCenter.

But both teams are different. The Colonials have gone with goaltender Francis Marotte and their power play is the best in Atlantic Hockey, clicking at 22.5 percent with 42 goals. They also have nine shorthanded goals for good measure.

Canisius is on a 17-game undefeated streak with the second-best power play in the conference (21.1 percent) and the second-best penalty kill (87.5 percent). They're backstopped by Hobey Baker Top 10 Finalist Charles Williams and have been kept focused by the leadership group including Williams, senior captain Geoff Fortman and junior Ryan Schmelzer.

"They're a confident group and the message in the locker room is crystal clear," Smith said. "The leadership group has done an unbelievable job because there are so many moments the coaches aren't there, so many thoughts that the team creates on its own. Geoff and the group has kept them dialed in on the short term and it's special to watch."