It was a snow day Wednesday, and 10-year-old Benjamin Wasik was doing what every kid in the Buffalo area was doing that day: playing in the snow.

The fourth-grader was trapped under a pile of snow for about 20 minutes at his grandparents' farm on Aiken Road in Pendleton.

Family members pulled Ben out of the snow and performed CPR. The boy was raced to the hospital, but he was gone.

"It was just a little boy playing," Wasik Reed said. "He will be forever missed. I don't know how we'll go on but we have to."

Niagara County was in mourning for Ben on Thursday as news of his death spread.

The Starpoint School District, where Ben attended Regan Intermediate, sent a message to parents of students to alert them to the heartbreaking news. Crisis counseling was set up for his classmates and stress debriefings were scheduled for the first responders who tried to save the boy, some of whom knew him and his large extended family. The boy's uncle retired from the Lockport Police Department.

"They're hurting, but they're not hurting anything like the Wasiks are," said Sheriff James Voutour.

The boy's aunt and law enforcement described what happened:

Ben was at his grandparents' farm on Aiken Road in Pendleton, where a foot and a half to two feet of snow  had fallen by afternoon.

His father told him not to climb on the piles of snow, Voutour said.

No one knows for certain what happened next.

But suddenly, Ben's family realized he was missing.

"They found him shortly," Wasik Reed said. "But it wasn't soon enough."

They found him in a 15-foot high snow bank next to a barn where a plow had pushed up snow from the parking area.

Someone called 911 and the dispatchers instructed the family to start CPR. 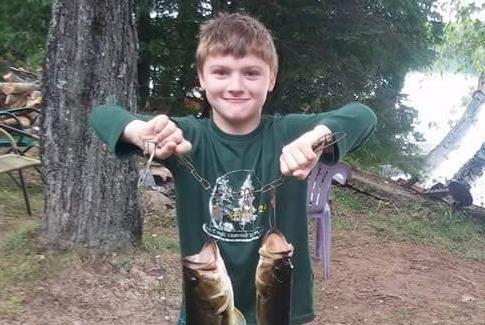 Niagara County sheriff's deputies and an ambulance crew were there within minutes. They used a defibrillator to try to restart his heart.

"Everything was done at the scene to try to revive him," Voutour said.

A Twin City Ambulance crew continued lifesaving efforts on Ben and raced him to Millard Fillmore Suburban Hospital in Amherst with a sheriff's deputy escorting them. Amherst police also shut down roads so the ambulance could get to the hospital as soon as possible.

Doctors unsuccessfully tried to save Ben. The death was ruled accidental, caused by asphyxiation by entrapment.

Investigators said Ben Wasik was just doing something all kids want to do: play. They said he may have been trying to dig a tunnel into the snowpile but they weren't certain.

They urged parents to always keep an eye on their children, but at the same time described what happened as a freak accident, one that there was no way to predict.

"The parents did everything they could to keep an eye on him and as soon as they didn't see him they started to look for him," said Voutour, who on the car ride from the Pendleton farm to the hospital in Amherst saw kids playing on three different snow banks.

A similar incident happened about 15 years ago on Errick Road in Wheatfield, sheriff's officials said.

Voutour also praised the the rescue crews, saying they did everything they could to save him. "Unfortunately, in this business," he said, "we don't save everybody."

"He was a sweet, gentle soul," his aunt said.

Ben loved to play outdoors, she said, and enjoyed spending time at his grandparents' farm. He loved to go fishing with his grandfather when the family would go to their cottage in the summer. Like so many other kids, he liked baseball, Star Wars and Legos.

Ben's death in the snow struck many in Buffalo hard. The snow storm meant two snow days in a row for kids. Many children and their parents spent them reveling in the snow.

"How many times as children did we all do this....go out and play...very sad and sorry," one woman commented on a Buffalo News story about the terrible accident.

"That's so sad and so scary," wrote another parent. "My 10 yr old was outside playing with his other 10 yr old friends today. Just hits close to home, you never know."

A man posted to a friend about a memory from his childhood. "Remember ours collapsed and you pulled me out?"

Another mother shared a moment of panic she experienced Wednesday. "I was just shoveling outside with my 4 year old (he likes to "help" with his little shovel), and suddenly I didn't see him... I immediately panicked thinking this happened. But he was only standing behind a tall pile."

Wasik Reed knows her family will forever second-guess the events of the day.

"The what ifs are endless... if there was no snow day," she said.

She hopes that the terrible accident that took her nephew's life may somehow prevent other similar tragedies.

"If this can prevent anything, I know that the family would want that," she said.

She asked for prayers and support for Ben's parents and brother and sister.

"Pray. Hug your kids tighter. Be thankful for your children and never take them for granted," she said. "It's a senseless tragedy. But if someone could learn from it. Every child plays in the snow."