At 17 years old and a junior at Wellsville High School in 1943, Peter T. Xanthos skipped school for a day and hitchhiked 35 miles to Olean, the nearest Navy recruiting office.

“I walked in and there was a petty officer and I told him I wanted to enlist. Everyone wanted to enlist back then. That was the spirit. All my friends were enlisting,” said Xanthos, who remembers his rejection like it was yesterday.

And that’s pretty good for a World War II veteran who celebrates his 91st birthday today.

“The recruiter told me I had to have my parents’ permission because I was under 18. My father refused to sign the early enlistment papers because he knew what war was.”

Theodore Xanthos, his dad, had immigrated to the United States from Greece at 16 years old in 1898. But when the Balkan War started in 1912, he, like many Greek immigrants, returned to his homeland and enlisted in the Greek army to fight Turkey.

“He was in several battles against the Turks and a lot of territory that went back to ancient times belonging to Greece was regained,” Xanthos said in providing a short history lesson on this lesser-known war.

By 1914, his father was back in America and World War I had started. Three years later when the United States entered the war, Theodore Xanthos was drafted. But by the time he was scheduled to be shipped overseas in the fall of 1918, the war had ended.

Xanthos says he was bitter over his father’s decision to deny him the chance to fight at 17. After all, many of his friends had gotten their parents’ blessings to enlist early.

“I continued with school and when the summer of 1943 came along, I did the next best thing and got a room on Chippewa Street in Buffalo and worked at Bell Aircraft on the swing shift, four to midnight, and made good money,” he said of his desire to contribute to the war effort.

But his 18th birthday, March 13, 1944, could not come quick enough for him or the U.S. government. He was just as eager to join the military as the government was to draft him.

“A person told me to go to the draft board when I got my draft notice and show them the papers for when I had tried to enlist in the Navy at 17. So I did and the draft board put that on my draft records and ‘Navy preference,’ ” he said.

When he was summoned to Buffalo to begin military service, he remembers standing in a long line sweating it out, wondering if he would be assigned to the Navy.

“Two big recruiters were going down this line of about 25 guys and telling each one of them, ‘Army.’ I thought I was going to end up in a fox hole in Europe. But when the recruiter looked at my papers, he said, ‘Navy.’ I was the only one,” Xanthos said, his voice filled with tension as he recalled that moment so long ago. “I wanted to be in the Navy so bad. On a ship, you move around. It’s like the old saying, ‘Join the Navy, See the World.’ ”

Well, he did not see the whole world, but he became very familiar with large sections of the Pacific Ocean and some of its islands.

Stationed on the USS Bingham, a 450-foot troop transport ship, equipped with 20 landing craft boats, he was part of the three-member crews who operated each of the landing boats.

“We’d lower them with cranes off the deck of the ship and the troops would climb down the sides of the ship on rope cargo nets and into the boats. Our ship carried 2,000 troops.”

When all of the landing crafts from the different troop ships were loaded, they traveled together in massive waves toward the island beaches and the waiting Japanese forces.

“At Saipan we were being shot at as we were coming in, but at Okinawa, the Japanese tried a different strategy. They went inland to fortified caves. There were 120,000 Japanese front line troops on Okinawa. We were getting close to their homeland and they were worried.” 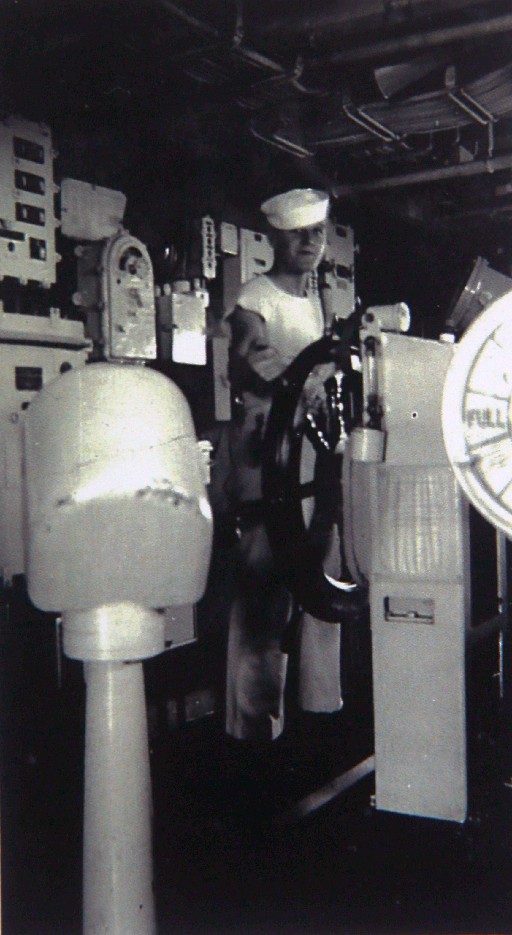 Navy veteran Peter T. Xanthos at the helm of the USS Bingham, which ferried troops to the beaches of Japan during World War II.

Before the invasion, he recalled, he had a conversation with a young soldier from the 10th Army.

“He came over to me and told me he was scared. I tried to calm him. I played bigshot. I told him there was nothing to it. It’s a piece of cake.”

Xanthos soon discovered it was anything but that.

“When we got to Okinawa, there was only a little resistance on the beaches, but there were kamikaze raids on our ships just about every day,” he said of the Japanese pilots who committed suicide by crashing their planes onto the decks of Navy ships.

“After delivering a load of troops or cargo to the beach, I’d get back to the ship and onto one of the 20-millimeter, anti-aircraft guns loading magazines of shells,” he said.

The Kamikaze pilots flew so close to the Bingham that at times, Xanthos said, he could actually see the faces of the pilots.
But the USS Bingham was spared.

And while there was no time for Xanthos to reflect on how his father had tried to shield him from war during the heat of these battles, the young sailor later came to realize how right his father had been in delaying him from experiencing the horror of war.

“Okinawa was one of the bloodiest of the battles in the Pacific war. There were over 12,000 Americans killed in action and the Navy had more killed than either the Army or the Marines, primarily from the kamikaze raids.”

Xanthos says he is grateful he made it home without a scratch.

In the years after the war, he went to college on the GI Bill, earning a business degree at Kent State University in Ohio. But finding a job back in Western New York was not easy because there were so many other veterans who had college degrees.

“I dug ditches back in Wellsville. I took any job I could get,” he said.

In 1953 when he married the former Athena Georgeson, Xanthos caught a break and landed a job in the accounting department at Ashland Oil in Buffalo, soon achieving certification as a public accountant. After six years,  he went into business for himself, opening an accounting firm on Grand Island that he operated for decades, before selling the business and retiring.

Xanthos, who with his wife raised three children, says he remains deeply proud of his military service.

“I still remember the day I boarded a bus with a group of other recruits and we were taken to boot camp at Sampson Naval Training Base on Seneca Lake. Oh, I was so happy.”

And when his happiness at becoming a sailor settled, he said, another joyous thought took its place.

“I could hardly wait to go overseas.”