Pamela Dayton and her husband, Jon, used to plant a vegetable garden on their Genesee County property.

Then they had four children.

Busy lives and the demands of parenthood meant something had to give. Out went the garden –  but not the couple's commitment to helping Olivia, Jack, Henry, and Elliott, ages 7 to 14, eat right, enjoy meaningful family time and appreciate some of the bounty that comes from their region.

They turned to Porter Farms in nearby Elba, just north of Batavia, and its Community Supported Agriculture model, which offers weekly shares of its organic produce from late June through fall for those who pay $400 up front.

"We should eat local as often as possible," said Dayton, who is studying to become a Methodist pastor. "The Porters are honoring the best farmland in the world by growing the best possible product they can in the safest way possible. That really seems like a respectful way to live."

Porter Farms is the largest of at least 11 small farms that feature CSA services in Western New York. The practice allows local farmers to share risk, secure customers and help cover planting, labor and equipment costs up front, which brings more financial cover in a trade where weather, disease and competition from all parts of the globe bring unpredictability.

Customers gain the advantage of a fairly dependable supply of fresh fruits and vegetables at roughly half to two-thirds the cost of produce in most farm markets and grocery stores, according to those in the CSA field. They also can feel good about supporting the local economy, cutting the carbon footprint for food that otherwise would be shipped or trucked from vast distances, and of the health benefits that flow to their families.

"If you're eating an Arden Farm share, you don't need to take a multivitamin unless your doctor tells you to," said Dan Roelofs, owner of a 50-acre certified organic farmstead outside East Aurora that looks to sell about 400 CSA shares for this harvest season.

This is the time of year when farms generally offer their CSA shares as they prepare fields and plantings. Those familiar with the process recommended you consider the following if you'd like to partake.

1. Know yourself and your family 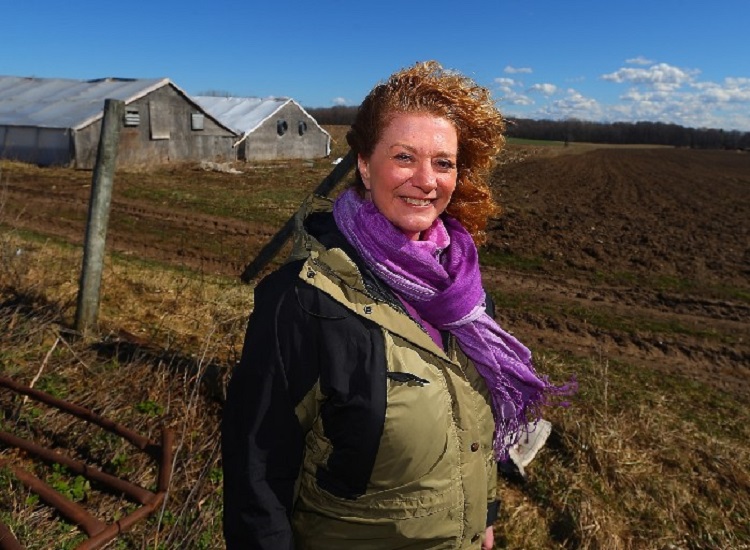 It's good to enjoy vegetables and be an adventurous eater when purchasing a Community Supported Agriculture (CSA) share, says Emily Porter Swarner, who handles promotions and marketing for the second-generation Porter family farm. (John Hickey/Buffalo News)

"People are so busy being busy these days. I don't think they spend as much time being concerned with what they eat. Certainly there are people who are, and they are our best customers," said Emily Porter Swarner, who handles promotions and marketing for the second-generation family farm that supplies the Dayton family and about 800 others with produce.

Health-conscious foodies, families concerned about pesticides, and those interested in supporting local farmers should consider a CSA, Roelofs said. His customers tend to fall into two camps: those who tend to be healthy, athletic and active; and those bent on eating in a more nutritious way because of health concerns.

Those who choose a CSA must decide what is important and be ready to make some tradeoffs.

"You have to be interested in preparing dinner at home consistently," Roelofs said. "If you're the kind of person who goes out to eat a lot, it's not going to work because you won't have the time to use all the produce we give you."

If you're a picky eater, a CSA probably isn't for you, either, Dayton said, "but there isn't something to be picky about every single week."

You have to be prepared to pick up food at a farm or agreed-upon destination choice and share risk with your farmer. Variety may suffer in a bad crop year, Swarner said, while other years can be "very bountiful." 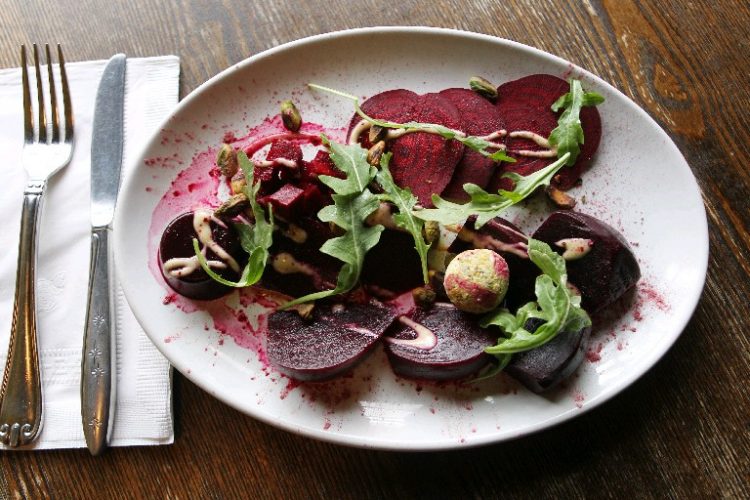 Expect beets and greens to be the most common foods early in the season when it comes to a CSA share. (Sharon Cantillon/Buffalo News file photo)

The harvest season isn't consistent. There are lots of greens, onions and beets early on, and

root vegetables, winter squashes and more onions as fall nears. The six-member Dayton family, which lives in Alexander, enjoys Lebanese food, including fattoush – a bread salad mixed with greens and veggies – starting in late June, when its Porter Farms shares begin. "By the time August and September comes, you have, as a conservative estimate, 10 or 12 different items in your bag," Pamela Dayton said. "Some of the things don't even get home. My kids eat them between the farm and the house."

As the shares change with growing seasons, CSAs can offer dozens of varieties of fruits and vegetables; mostly vegetables. "Don't be afraid to try new things," said Oscar Vizcarra, director of the Becker Farms CSA outside Gasport in Niagara County.

"With a certified organic farm, there's going to be the occasional bug or worm" that can be brushed or washed away, Swarner said. There may be holes in some leaves and imperfectly shaped tomatoes and other foods. "Most customers feel, as I do: I would prefer to eat something that a bug can survive on," she said.

CSA shares can cost between $100 and $675 in the region, depending on their length and nature. They can include vegetables, fruits, eggs, milk and grass-fed meats, or just one or two of those varieties. Most CSA seasons run 18 and 24 weeks during the harvest. Some run as short as 10 weeks, or allow sporadic pickup of shares. Some CSAs have winter shares. Some allow U-pick options.

Arden Farm looks to provide weekly staples that include garlic, onions, lettuce and a cooking green. It takes flexible payments, sells a $200 gift card for $185 and delivers to homes and business in the East Aurora area. It delivers shares to Hydraulic Hearth in the Buffalo Larkinville district Thursday evenings and asks others to pick up at the farm on Tuesdays. Its shares cost more than Porter Farms, which requires a $400 to $425 payment before the harvest season starts.

The Elba enterprise is entirely CSA, and owns or leases 500 acres in mostly veggies. It has roughly two dozen pickup sites but delivers to only a few of them. It generally asks members to take turns picking up produce at the farm and bringing several shares to civic centers, businesses and private homes scattered from Buffalo to Rochester. Shares from Becker Farms run 10 to 20 weeks, allow payment week to week and accept payment through the Supplemental Nutrition Assistance Program (SNAP). See the box with this story to find websites for which CSA in the region might work best for you or visit localharvest.org/buffalo-ny/csa. 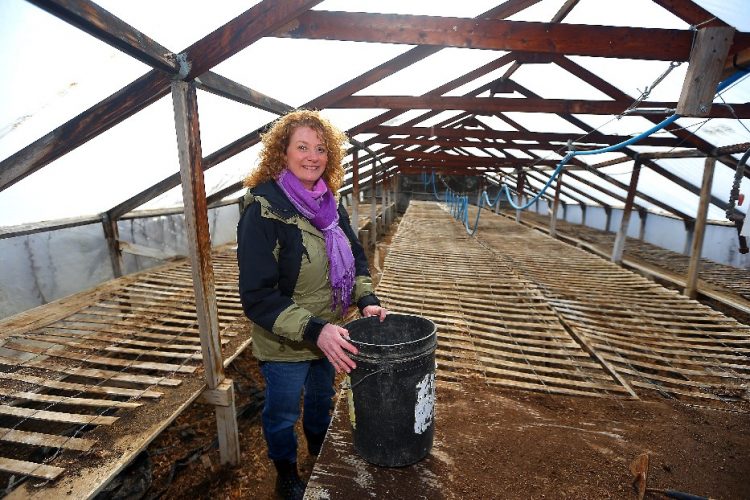 "A CSA is definitely a different approach to meal preparation," says Emily Porter Swarner, in a Porter Farms greenhouse on Wednesday where plantings soon will start. (John Hickey/Buffalo News)

The day you get a CSA share, you're going to have a lot of produce in your fridge. The day before, you're not. At the end of the share week, "it's soup night," Roelofs said. Dayton said farms that operate CSAs are good at letting members know in advance by email what produce will come their way, and including pertinent recipes. Trial and error will be part of the process, particularly during a first stab at such an arrangement, she said, but things will improve.

"A CSA is definitely a different approach to meal preparation," Swarner said. "You're getting whatever the farm is harvesting. You're not necessarily getting everything you need to prepare your meals, and you're getting vegetables you might not be familiar with or ever cooked before. A lot of people enjoy that, and those are the types of people that keep coming back."

Dayton has used two main sources to find the recipes everyone in the family will eat. The book "How to Cook Everything," by Mark Bittman, has at least one recipe for every vegetable. "His book is really accessible. It has short ingredient lists and easy techniques," she said. Dayton also finds recipes at

foodiewithfamily.com, a website written by a mother of five in the Southern Tier. Clarence plant-based blogger Jessica Meyers Altman shares ideas at gardenfreshfoodie.com and Roelofs said many of his customers find ideas on Pinterest.

Dayton has learned to can some of her CSA foods, and to make jams, jellies, pickles, chutneys, relishes and tomato sauce. "It's not as hard as I thought it was going into it," she said. "If you can read and follow directions, you can do it."

Roelofs gives Arden Farm tours by appointment, and has held dinners, yoga classes and paint nights on the farm. He also supplies several restaurants with fresh produce and helped put on a farm-to-table dinner last fall at the Dapper Goose restaurant near SUNY Buffalo State.

Dayton looks forward to picking up her shares at Porter Farms, where she meets like-minded people who have made the same choice she has when it comes to buying healthy, local produce. It gives them a chance to talk about food storage, recipes and wellness-related resources.

"It's a really welcoming, friendly, relational experience you're not going to find at the grocery store," she said, "and you can talk to the farmer: 'How do you guys eat this?' It's like a giant family in a way. Everybody's there because they love the produce and they're happy to talk about how they're using it."

Farmers interviewed for this story said CSA produce costs 30 percent to 50 percent less than that you can find in a grocery store or farmers' market. The food is designed for optimum freshness and nutrition, not travel, uniformity and appearance. Dayton said trips to the farm and time spent cooking food at home have brought her family closer – and made her children healthier eaters.

"A lot of people will tell me their kids are eating more vegetables because they're coming from 'their' farm," Swarner said. "They've been to the farm. They've see where the food grows. They're more interested in trying something when they know where it comes from."

The health and family benefits only tell some of the fulfillment story. Generosity also is part of the process. CSAs allow participants to share fresh, affordable food with family, friends, neighbors and co-workers. Becker Farms members who can't pick up a weekly share because they're out of town, for instance, can ask that the farm drop it off at the Niagara Falls City Mission. CSA members and the farm itself gave almost 3,000 pounds of produce to the mission last year. Porter Farms gives one share free to a needy family for every 15 new shares a church or neighborhood group purchases, and religiously drops off a weekly share, or more, to the Society of St. Vincent de Paul dining site near the University at Buffalo South Campus.

At Arden Farm, one of the workers is engaged to a former CSA customer who started working at the farm, too.

"We're full service," Roelofs said with a chuckle. "They fell in love under a rainbow, while planting tomatoes." 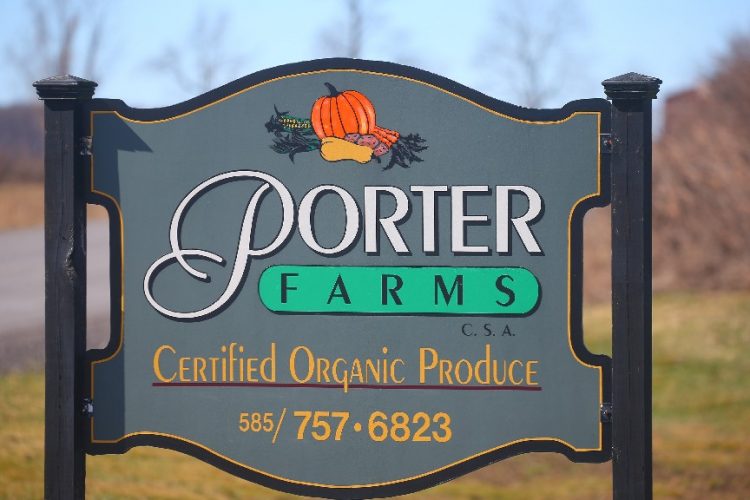 (CSA is full; you can add name to waiting list)

Learn more about organic farming at nofany.org and more about CSAs at localharvest.org/buffalo-ny/csa