But if traveling fans are looking for stadium food that best represents Buffalo, or at least veers away from the mundane, browse this list of 10 foods available in the KeyBank Center for the NCAA Tournament on March 16 and 18. (Prices are subject to change.)

1) Roast beef on weck from the Aud Club, $10, comes with chips.
Although chicken wings are not served in the general admission levels of the KeyBank Center, there are several places to try roast beef on weck. The Aud Club, near Section 111, offers made-to-order delicacies, as employees dip the hot, flavorful meat into jus before assembling the sandwich. Don't skimp on the horseradish, don't pass on the pickles and appreciate the salt on the roll.

Take a peek at the 1995-96 NHL standings and Sabres' statistics for that year as you wait in line; they're relics from the old Memorial Auditorium in Buffalo. (Note: You can grab a beef on weck at some of the other stands in the arena; those might just be missing the careful hand-dipping.) 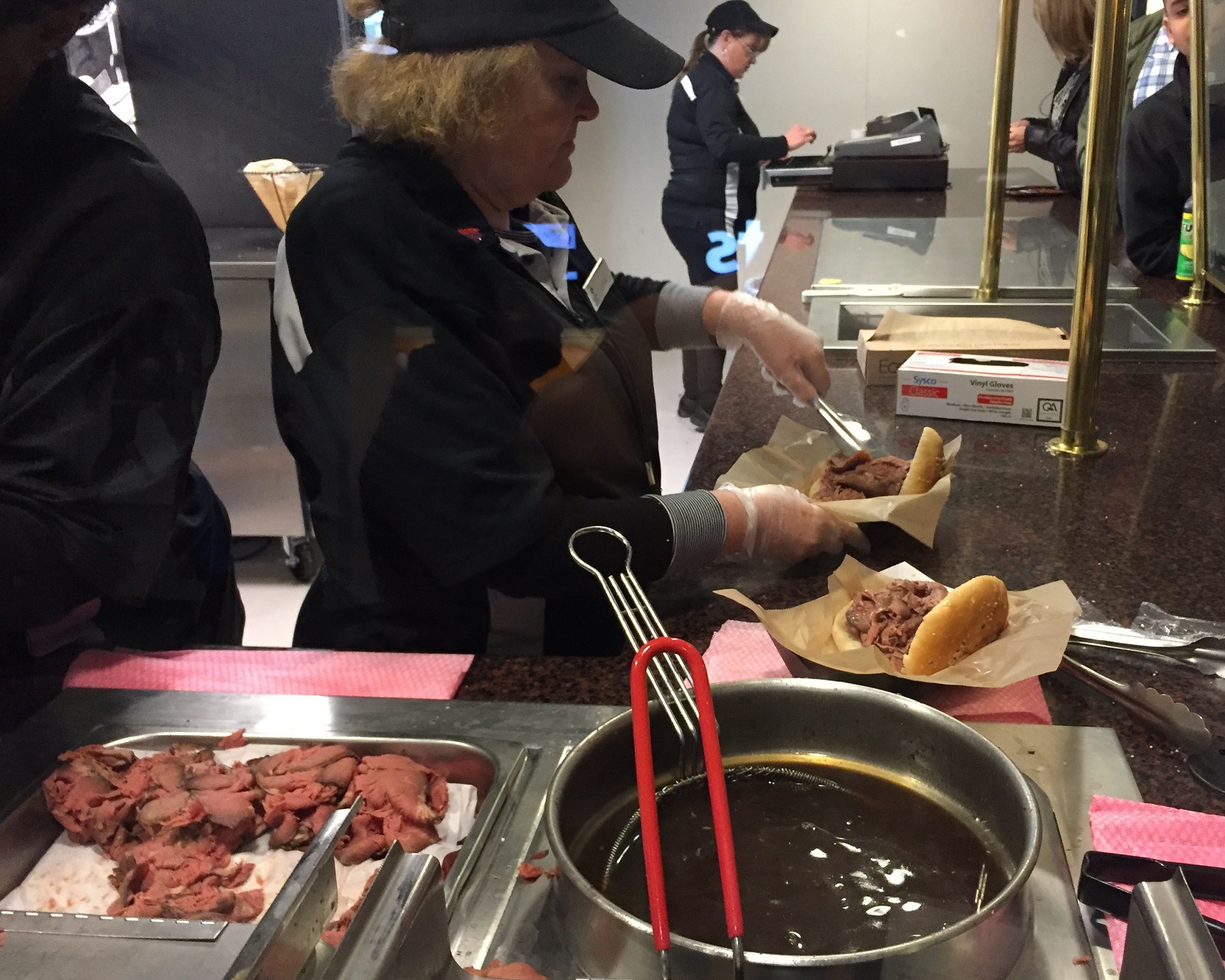 The Aud Club offers roast beef on weck that's made to order. The beef is dunked in jus before the sandwich is assembled. (Ben Tsujimoto/Buffalo News)

2) La Nova cheese and pepperoni pizza, $6.50
Buffalo flaunts its own twist on the classic - it boasts a thicker crust than New York City's, yet still one thinner than Chicago's, and we're particular about how our pepperoni curls. La Nova takes pride in its Buffalo roots since 1957, and although you might wince at the price, the product is hot, cheesy and full of flavor. 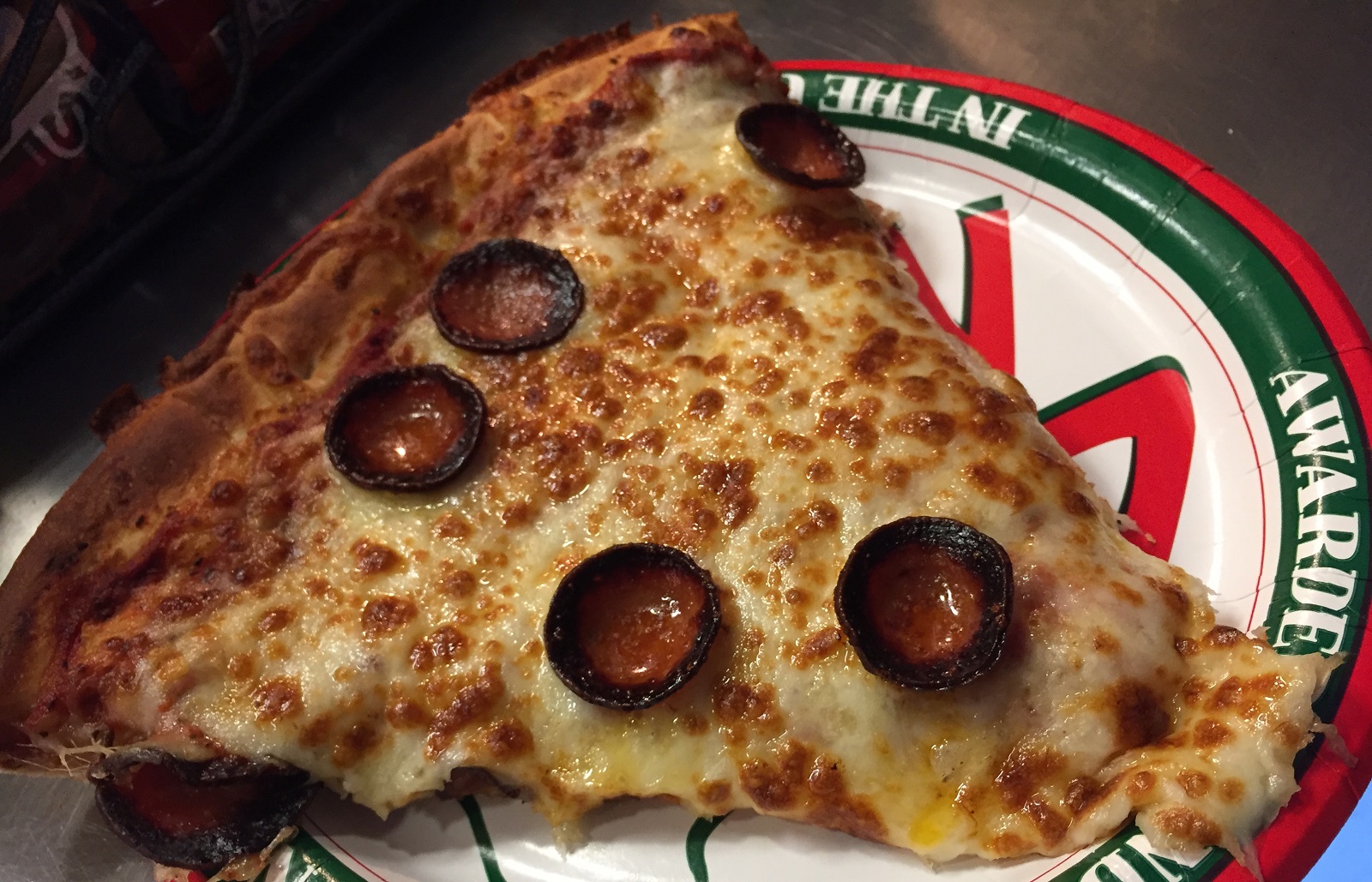 A slice of pizza from the La Nova booth inside KeyBank Center. (Ben Tsujimoto/Buffalo News)

3) Buffalo chicken hot dog, $8.50, comes with chips.
A classic dog is topped with shredded chicken bathed in hot sauce (though it's not particularly spicy), julienned carrots, celery, onion and blue cheese crumbles. It might be a little messy to munch at your seat, so snag a few extra napkins.

Of the options on this list, the chicken hot dog is one of the most filling. Don't ignore the chips on the side, which are fried in a generous amount of oil. 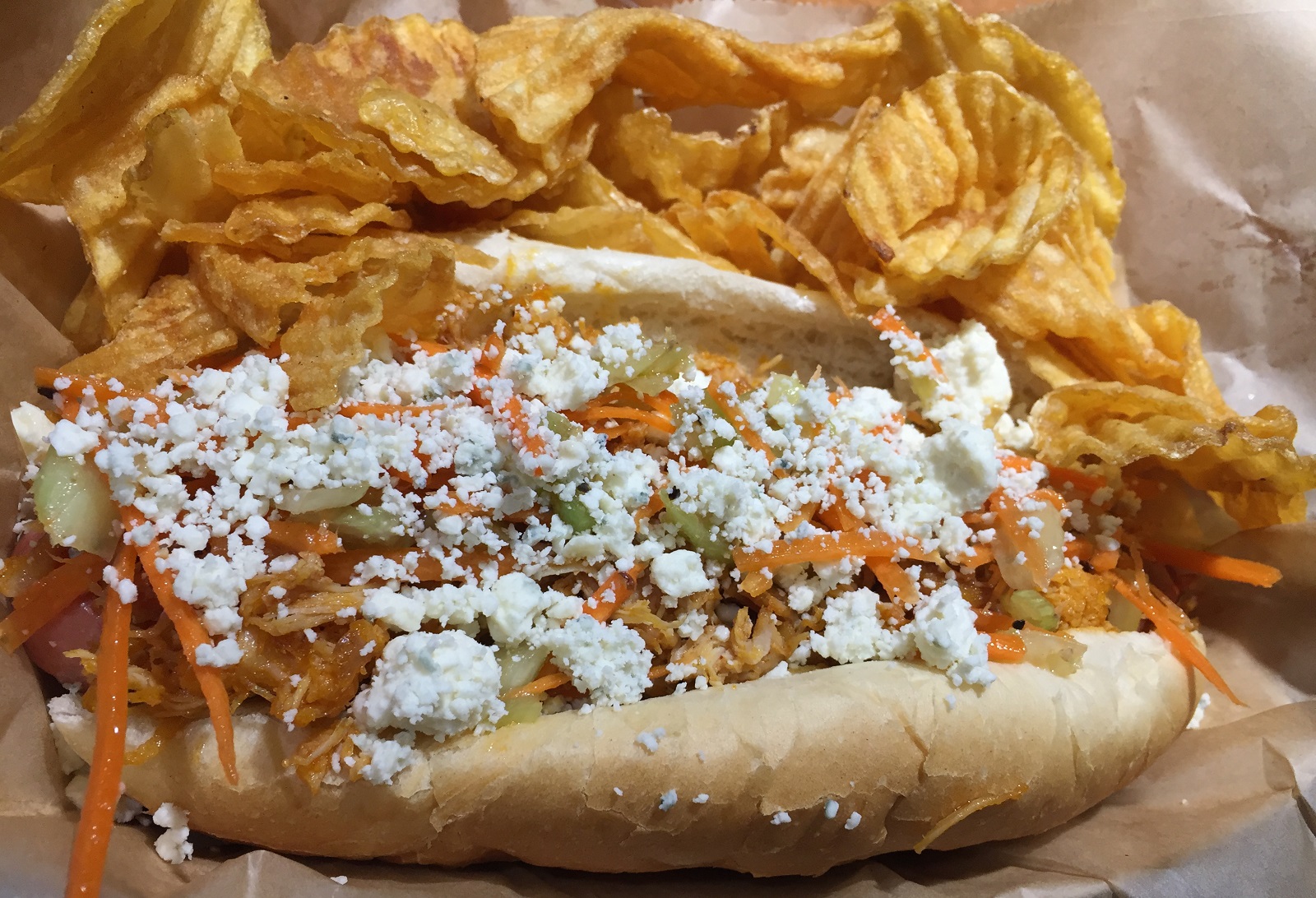 4) The Polish Platter from Broadway Sausage, $14
While this might seem to be a financial splurge, the Polish Platter stars three potato pierogi from Ru's, a relatively new local business roughly five minutes from KeyBank Center.

Once you've downed the three pasta pillows covered in caramelized onions, make your way to the juicy Polish sausage bites and a curious pile of sauerkraut. Polish immigrants are central to Buffalo's early history. Thousands flocked to the Queen City around the turn of the 20th century, bringing cultural traditions that Buffalo continues to value today. 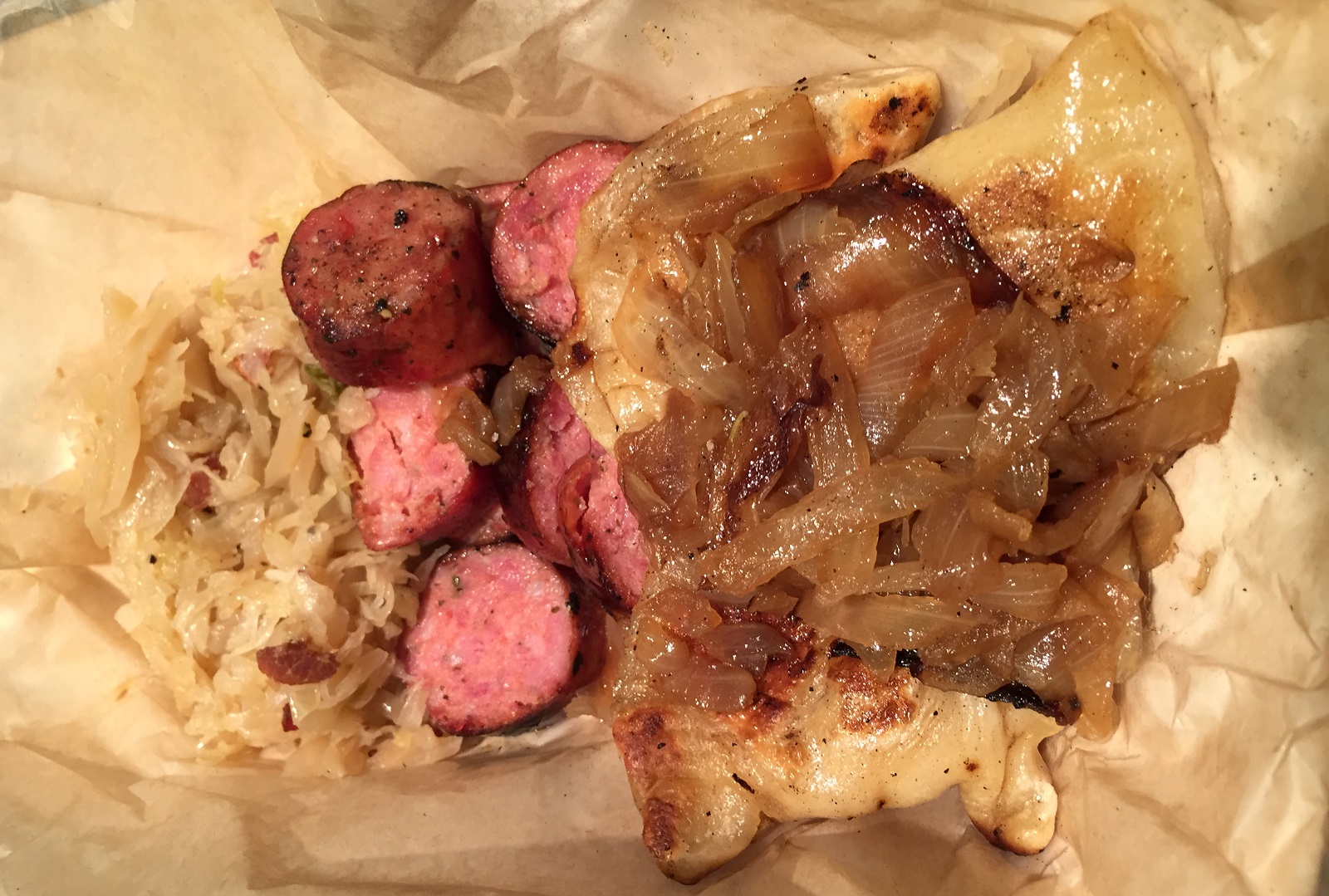 The Polish Platter from Broadway Sausage in the KeyBank Center. (Ben Tsujimoto/Buffalo News)

5) Go-Ru's noodle bowl, $12
Go-Ru, which means "goal" in Japanese, has a simple menu: beer, water and a noodle bowl. The booth's specialty is arguably the most flavorful option on our list. The balance of soy sauce to noodles, chicken, green onion, lettuce, sesame seeds and snap peas is well executed, and for those desiring a kick, a bottle of sriracha lurks nearby. 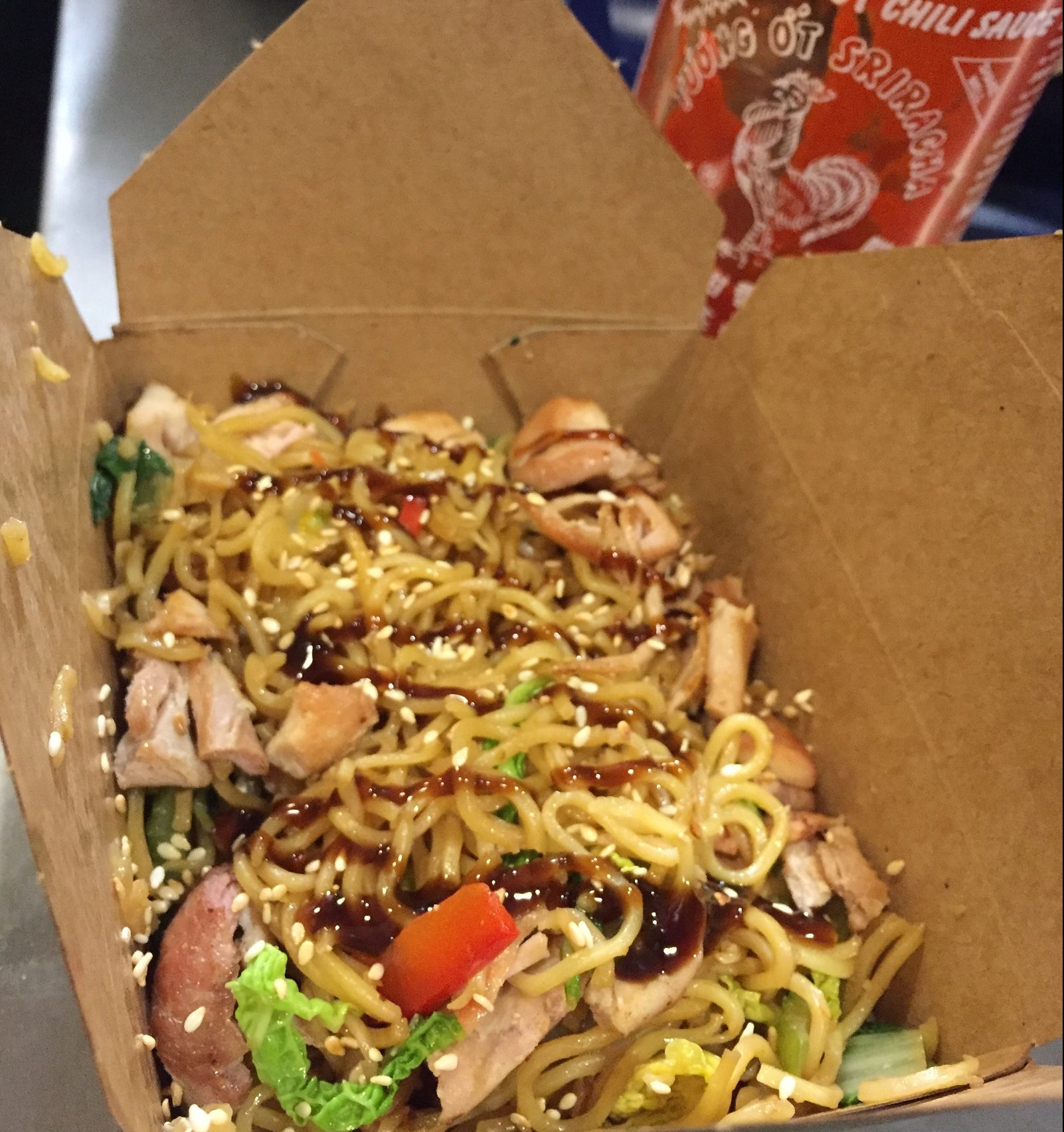 The noodle bowl from Go-Ru's inside the KeyBank Center. (Ben Tsujimoto/Buffalo News)

The value is more in the unusual nature of Mexican-American food as stadium fare, as the tacos were decidedly average in flavor (although one of the authors is often accused of being a taco snob). 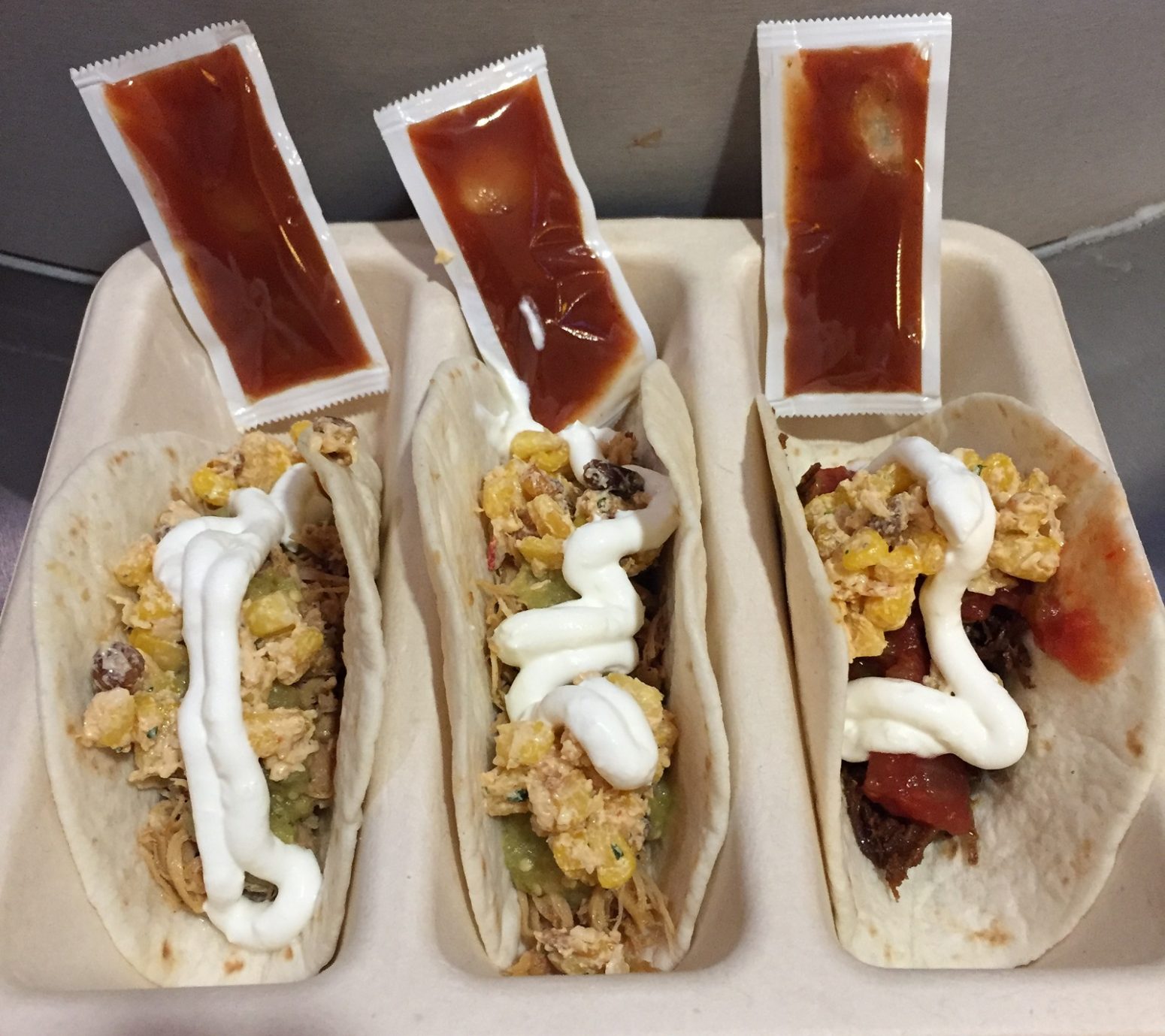 7) Pizza Logs from Blue Line Fryer, $6.50 for three
The most disheartening part of eating a mozzarella stick or pizza log is when you crunch into the morsel and there's no cheese inside. That's not a concern with Pizza Logs, a company just outside of the Buffalo area, which are stuffed to the brim with cheese, sauce and pepperoni, finished with a serious crunch on the outside. You might go back for seconds. 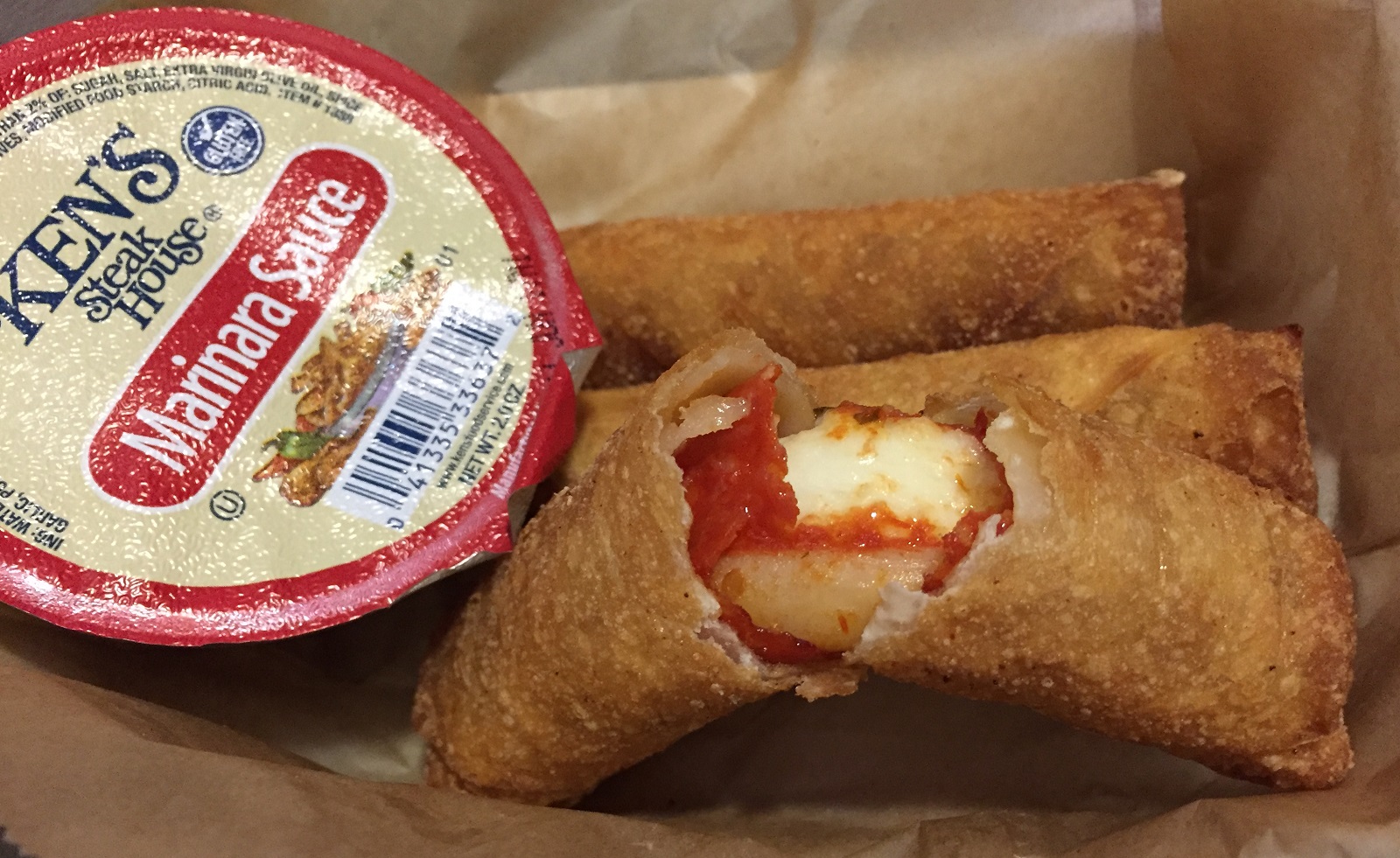 8) Fried pickles from Blue Line Fryer, $4.75 for five
It's worth waiting an extra few minutes for these to cook, as the spectacular outer crunch is complemented by the juicy dill pickle slice huddled within. It's unusual, flavorful and it might burn your mouth if you're not careful. Blue cheese is offered without additional charge, and it provides a nice cooling effect. 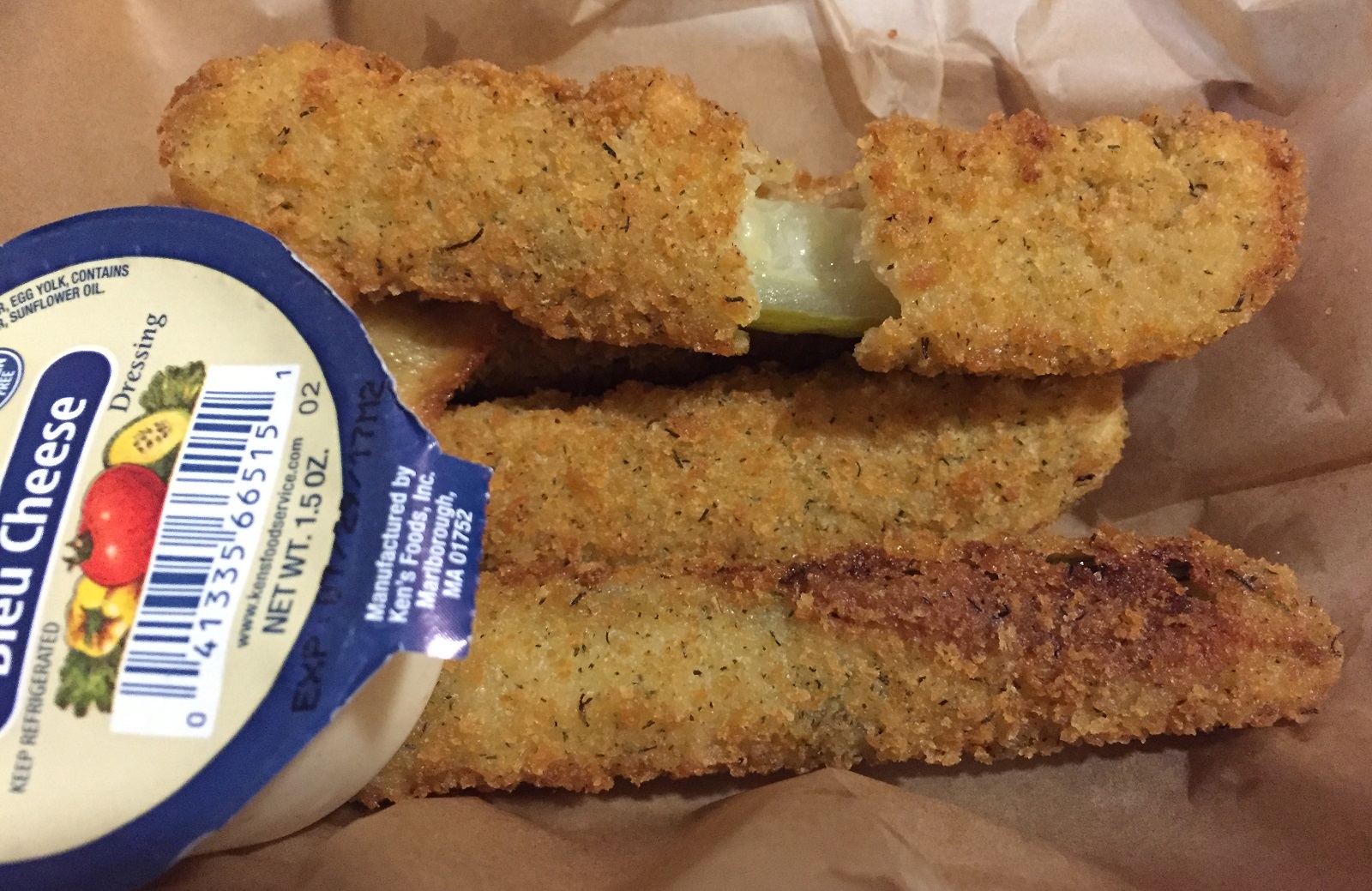 9) Wegmans sushi from Market, $10 - $11
Want something to just grab off the shelf and go? Leave it to Wegmans, the Rochester-based grocery chain that garners national acclaim, to offer four types of the fresh sushi rolls it makes at its stores. Choose from California, spicy crab, spicy shrimp and a veggie roll. 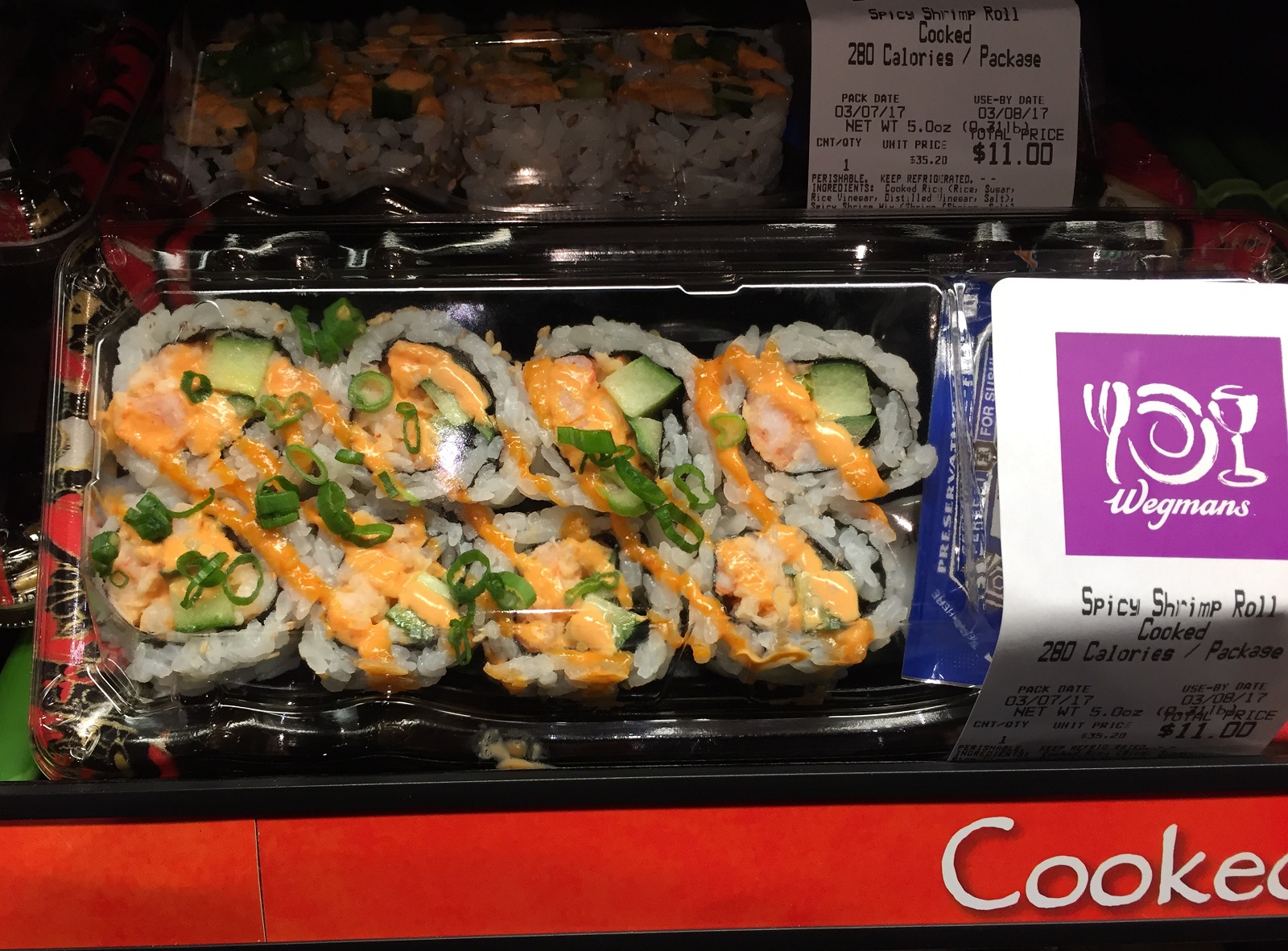 10) Tim Hortons coffee, $2.75
Looking for something to wash it all down? If you want it hot, it'll be easy to spot a stand selling beverages from Tim Hortons, the North American chain started by the late NHLer and Buffalo Sabre Tim Horton. Coffee, hot chocolate and French vanilla cappuccinos fill out the menu, but the only catch is you'll pay about $1 more per drink than you would outside the arena.