Around 36,000 customers of National Grid and New York State Electric and Gas remained in the dark Thursday night.

Power crews were making headway, however.

In Niagara County, there were 4,900 customers with outages, at around 11 p.m.

In some areas, where it appeared as though utility companies would not be able to restore power until Friday, officials were setting up shelters for residents overnight.

Temperatures across the Buffalo Niagara region are forecast to drop into the mid 20s overnight, and even colder this weekend.

Here's a list of some of those areas where warming shelters are already in place:

Power to most homes in Erie County is expected to be online by midnight tonight in most places, however, some customers in Newstead aren't expected to come back up until 10 p.m. Friday, by utility estimates.

Newstead has set up a warming center at its Senior Center and Fire Hall at 5691 Cummings Road, according to Supervisor Dave Cummings.

"We're concerned about some of our seniors because they live in mobile home communities, and those communities don't have power," Cummings said.

So far, only a couple dozen residents in the dark have availed themselves of the warming center Thursday, the supervisor said.

On Thursday afternoon, the City of Tonawanda still had several hundred residences without power, mainly in the Millstream and Gastown sections of the city. However, the Fire Department said power was reported late Thursday afternoon, and plans to offer shelter at Fire Headquarters were canceled.

In Niagara Falls, the John A. Duke Senior Center, 1201 Hyde Park Blvd., is open for warming until 10 p.m. The Niagara Community Mission, 1570 Buffalo Ave., and the Niagara Gospel Rescue Mission, 1023 Ferry Ave., are open around the clock for warming or sleep. 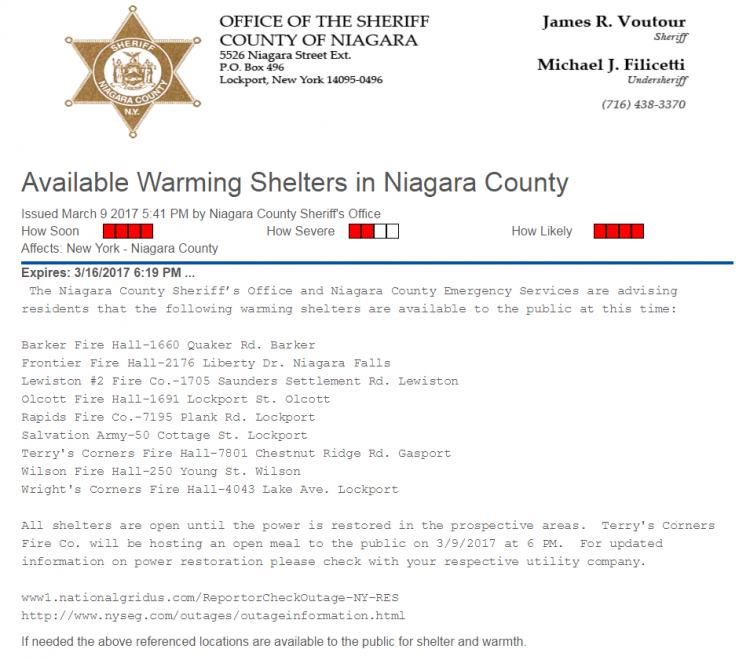 Other warming shelters in Orleans County include:

Banker said officials are scheduled to be briefed by National Grid officials on the status of restoration efforts later today.

"Our concern is it's going to 24 degrees tonight and tomorrow night is 10 degrees," Banker said.

In Genesee County, emergency management officials announced that an emergency shelter at the Batavia VA Medical Center, 222 Richmond Ave., will be set up by evening.

An emergency shelter has been opened in the Varysburg Fire Hall, 2446 Route 20A, staffed by American Red Cross volunteers with help from the fire company and the Wyoming County Emergency Management Department. The location is in the midst of some 6,000 customers still without power in the county. Questions may be directed to the Sheriff's Office at 585-786-2255 or the Varysburg Fire Company at 585-535-7984.