In "Kong: Skull Island," the giant ape doesn't climb the Empire State Building. In this incarnation, King Kong appears nearly as tall as the New York skyscraper itself.

Fortunately, for the colossal-sized Kong, he is able to stay out of New York, which was not very kind to him. But he has plenty to keep him busy on Skull Island.

Kong's titanic battles with prehistoric-like creatures  -- including the large lizard-like "skull crawlers," a term coined by a stranded World War II pilot -- and the close and often fatal encounters humans have with both are at the center of this classic monster "B" movie, dressed up in 21st-century special effects.

It's a fun and at times suspenseful creature adventure, with a nod to some elements of the Kong story dating back to Ernest B. Schoedsack and Merian C. Cooper's all-time 1933 classic, featuring Willis O'Brien's stop-motion animation gorilla.

There are the spear-carrying local natives -- Buddhist monk-like this time, rather than African -- who are submissive to the giant beast on a prehistoric and uncharted island. They've also built a giant wall, although in this case it's not to keep out Kong.

The big guy's weakness for light-haired white women also remains intact, as well as his humanized behavior toward her.

Also like the original, "Kong: Skull Island" suggests humans were wrong to mess with the giant ape's world. 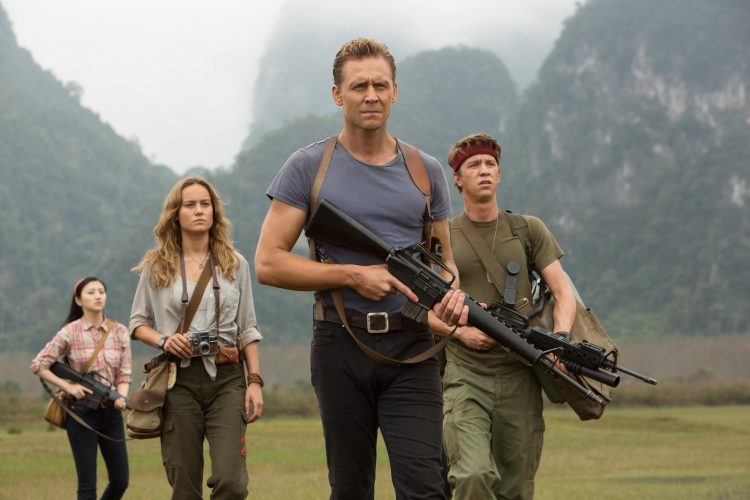 The film, directed by Jordan Vogt-Roberts ("The Kings of Summer") with tongue-in-cheek references to "Apocalypse Now," is set in 1973, during the last years of the war in Vietnam. The carnage to nature unleashed on the island by military weaponry is meant to mirror the destructive firepower that reigned down on the rain forests of Vietnam.

The story concerns a military mission, with civilians, to a South Pacific island at the behest of government official Bill Randa (John Goodman). Ostensibly, the purpose is to investigate a mysterious skull-shaped island prone to strange weather patterns. But Randa's real motive is to find monsters he believes inhabit the island. 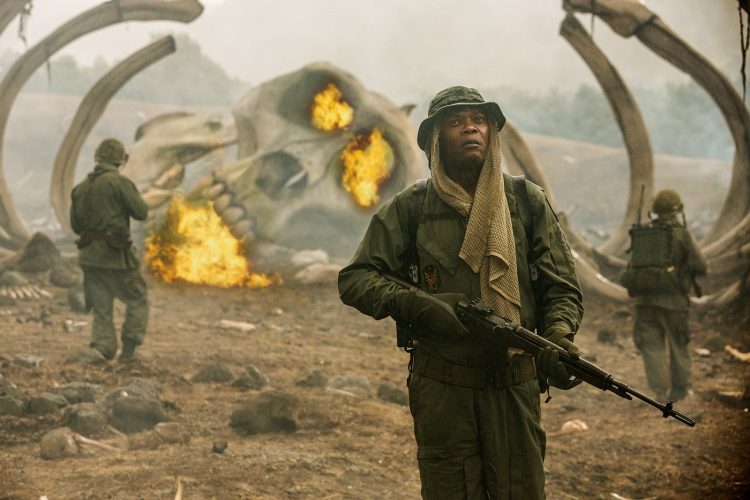 Col. Packard (Samuel L. Jackson, in a role that for him has grown old), is the no-nonsense commander of the small platoon carrying a chip on his shoulder over the failing Vietnam war effort. Among those with him are James Conrad (Tom Hiddleston), a British soldier-of-fortune, and  and photographer Mason Weaver (Brie Larson).

The group gets a taste of what they're up against when Kong starts swatting choppers out of the air like they're flies. The expedition's survivors are scattered to different parts of the island. They seek to reconnect, and then reach the northern side of the island in the short window of time they have to be rescued.

While trying to escape, they're at the mercy of the unpredictability of huge and unsuspecting creatures reigning terror upon their dwindling ranks.

John C. Reilly practically steals the film as Hank Marlow, the World War II soldier stranded on the island in 1944 who lives with the native tribe. Marlow distills wisdom and an arch take on things, dispensing common sense while Packard is going off the rails. He hopes to get the chance to see his bride and the son she was carrying 29 years ago.

"Son of Kong" was released in 1933, just nine months after the original. Next up was the 1962 Japanese film "King Kong Vs. Godzilla," which featured Kong in a regrettable gorilla suit.

Two poorly reviewed Dino De Laurentiis-produced films with Kong in primate suits followed, "King Kong" in 1976 and the lesser known"King Kong Lives" in 1986. Peter Jackson's CGI-propelled "King Kong," with Jack Black as filmmaker-adventurer Carl Denham and Naomi Watts as Ann Darrow in the Fay Wray role as the object of Kong's desire, was much better received.

Warner Bros wasn't monkeying around believing "Kong: Skull Island" could capitalize on the success of 2015's "Jurassic World," which did an out-of-this-world $1.6 billion box office worldwide. As an action-packed monster movie with a sprinkling of Kong's storied past, it could well follow in that film's footsteps.

If it does, look for a successor because when it comes to King Kong, humans, unlike movie studios, never seem to learn their lessons.

The lowdown: A military mission with civilians to Skull Island finds King Kong and other creatures, imperiling their escape.