“Kedi” is as close to perfect a film as I’ve ever seen. Director Ceyda Torun has created a poignant, quiet documentary exploring the (nine) lives of the legendary feral cats roaming Istanbul that is lovely to look at, a technical marvel, and an emotional stunner all at once.

Legend has it that when ships docked at Istanbul (or Constantinople as it was once known), their rat-hunting cats would hop off and get left behind, settling in the town and multiplying as cats do when left to their own devices. Hundreds of years later, the people of Istanbul regard it as their privilege to care for these thousands of kitties who claim shops, restaurants and rooftops as their homes, and tip-toe in and out as they please. The cats are part of the cityscape, mysterious and familiar at the same time.

The film is brilliantly executed with hand-held photography at kitty-level, following their four paws as they trot through the narrow winding streets of Istanbul. By featuring seven cats, and letting their main keepers narrate their stories, the filmmakers draw you right into Istanbul’s funky culture, and bring you up close with its famous cats, but also its unique communities.

In fact, the film may be called “Kedi,” which means cat in Turkish, but it’s equally about the people of Istanbul. The caring and love they share with these animals is profound.

“Without the cats, Istanbul would lose a part of its soul,” says one. 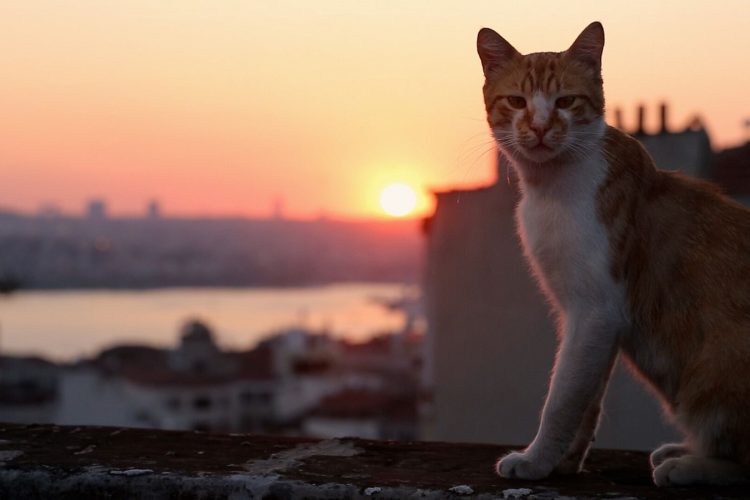 Kamil the cat stars in the documentary "Kedi."

People stop randomly to pet a cat lolling in the sun, and continue on their way, only to stop a block later to pet another one sitting on a bench, or feed one begging for food by their table at a bistro. More than one interviewee alludes to the constant trade of affection between people and the cats as “magical.”

The city is a grand character in the film, with its Old-World culture, textures, colors, ethnic foods and market places. The people are as exceptional as each featured cat, as is the teeming city that is ultimately closing in on them. It’s hard not to fall in love with everything in this movie—the kitties, the people, the kindness of all these strangers, the uniqueness of the city, the music, and the enchanted world onscreen.

The photography is mostly hand-held but exquisite. Many of the shots feature sunset or morning light, and anyone who has tried to cellphone-video the family cat doing something interesting knows how hard it is to capture a cat on camera. Yet cinematographers Charlie Wuppermann (also a producer) and Alp Korfali performed miraculous camerawork with these cats, juxtaposed with sweeping shots of the city of Istanbul.

This is a small film, but what a beautifully heartfelt one. It’s one that deserves to be seen, if for no other reason than to remind us that there are still corners of the world where the vulnerable are watched over by the compassionate.

Rating: Unrated but G equivalent for no offensive material.

The lowdown: Documentary telling the story of Istanbul’s feral cats, who are a cherished part of the city’s culture.