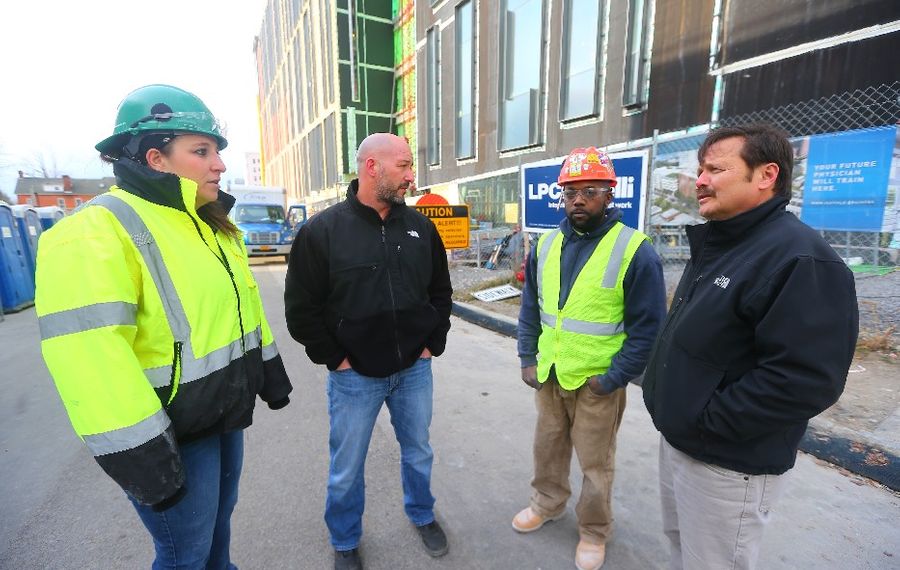 Federal agents are not the only ones trying to remove people from the Buffalo area who have entered the country illegally.

If Bill Bing, a carpenters union official, discovers workers at local construction projects suspected of being in the country illegally, the union tips off authorities.

That information has led to some raids and arrests, he said, although the detention last month of 32 individuals suspected of being in the country illegally and working at projects was not his tip.

"We were not directly responsible for the information on those two raids," said Bing, the local representative for the Northeast Regional Council of Carpenters.

Bing said he is  glad to see the enforcement of immigration laws and makes no apologies for when he or other union members tip off federal and state authorities.

The jobs should go to American citizens and that it is not a union-versus-nonunion issue, he said.

"There are very good local union and nonunion contractors who suffer the fallout from dirty business," Bing said. "This directly affects area living standards, not to mention the tax dollars New York State, Erie County and the local municipalities don't and won't see."

Other trade unions, he said, tip off authorities, "but they are not as proactive as we are. The carpenters union devotes a lot of money and resources to this."

But even as the unions supply tips, Immigration and Customs Enforcement officials say there have been numerous false reports of federal officers conducting law enforcement actions against immigrants.

"Reports of ICE checkpoints and sweeps are false, dangerous and irresponsible," said Khaalid H. Walls, an ICE spokesman. "These reports create mass panic and put communities and law enforcement personnel in unnecessary danger," Walls said. "Any groups falsely reporting such activities are doing a disservice to those they claim to support."

Developers say they want only workers who are legally in the country at their construction sites but sometimes they lose control of who is showing up for work. Take for instance the hotel conversion of the long-abandoned Dunlop Tire Corp. headquarters on, an eyesore for decades off the I-190 near the north Grand Island bridges.

Jayesh Patel, the owner, said he does not condone the use of undocumented workers at that site,

But nine construction workers there were detained by Border Patrol agents Feb. 15 and charged with immigration violations. Patel's company, Rudra Management & Rosewood Hotels, had hired TG Interiors & Drywall Inc, a contractor in the suburbs of Dallas, which brought in the undocumented immigrants.

Patel said it was his understanding that the workers had proper documentation. Given what happened, he said it is unlikely he will hire the Texas contractor for future jobs.

"We don't take the system lightly, and we don't deviate," Patel said.

George LaBarbara, Patel's superintendent in charge of the $8 million hotel project, now regularly checks that all workers at the site have proper documentation to work in the United States.

"We're not required to do it, but we are," Patel said, adding that he encourages subcontractors to hire local residents to work on his projects.

Of the 23 workers detained on Feb. 13 at a convenience food store just down the road from a sprawling apartment construction site on the 4800 block of Hamburg's Southwestern Boulevard, seven ended up charged with either felony re-entry after being previously deported or immigration violations, according to U.S. Immigration and Customs Enforcement officials.

DGA Builders of Pittsford, the general contractor at Clifton Heights, declined to comment when contacted by The Buffalo News. But a construction worker at the site told The News that worker documents are now being carefully reviewed.

And it is not only unions who tip off ICE and the Border Patrol, according to Amherst immigration lawyer Michael B. Berger. Construction contractors  provide information to federal authorities if they believe a competitor has gained an unfair advantage by employing less expensive undocumented immigrants, he said.

"This especially happens in roofing and siding work often performed by undocumented workers and certainly unions and construction companies that rely on union workers see it as an unfair disadvantage," Berger said. "I've had clients tell me that they were arrested because of tips from other contractors."

"There has to be a safety valve to prevent overreaction to remove illegal aliens from this country without consideration to the consequences of the local economy," he said, pointing out that Western New York farmers are often unable to hire Americans.

"So they rely very heavily on undocumented workers," he said.