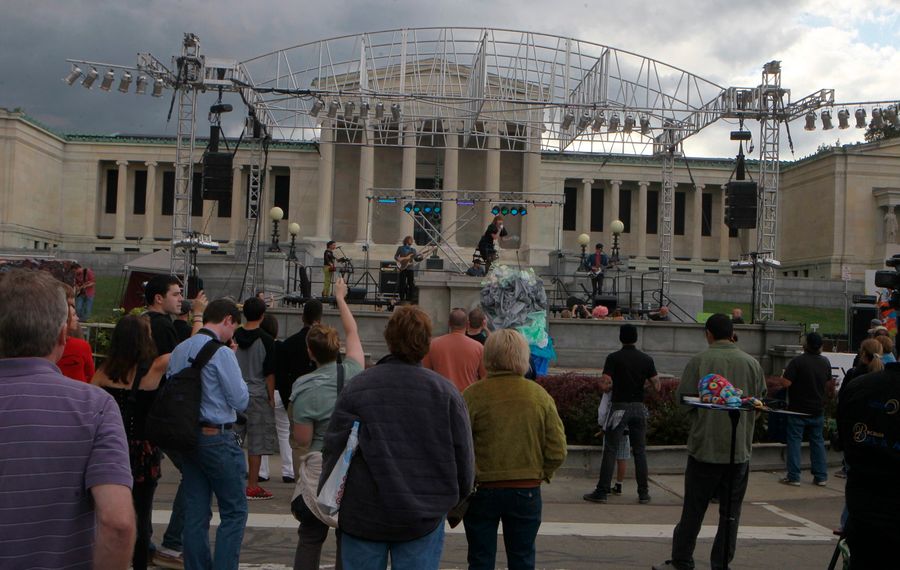 After a while, it just started to feel personal. Not a random natural coincidence, but the act of a deity with a particularly nasty attitude and a disdain for the arts, music, festivals, and all of the people who produce and patronize them.

For the past nine years, Robby Takac's annual Music is Art Festival took place on the grounds of Delaware Park surrounding Marcy Casino, the Rose Garden and the portion of Lincoln Parkway that slices between the park and the Albright-Knox Art Gallery.

Stages would be erected. Sound technicians would be hired and sound production installed. More than 100 bands and artists would have submitted their wares, made the cut, and prepped for the big day. Press conferences would be held. Vendors would have signed up and been ready to go. Fans loyal to the festival would have made their plans, cleared the decks for the 12-hour party, laid out the Music is Art T-shirt – the now-iconic black musical note in a yellow circle – they'd purchased the year before.

Yes. We'd be ready for this particularly Buffalo-centric celebration.

And then we'd wake up on the anointed Saturday during the first week of September, rub the previous night's activities from our eyes, look out the window, and curse, mightily and bitterly.

Rain. Black sheets of rain. Often urged along by an aggressively unseasonable wind. We'd sigh, pound down our coffee and shake our tiny fists at the vast indifference of distant heaven. Again? Really?!?!?

So no one would be seeing our uber-cool MiA T-shirt. We'd be sporting a garbage bag with a hole cut out for our head to poke through, instead.

Being true Buffalonians, Takac and his MiA team stuck it out, accentuated the positive and kept the show running with smiles on their faces, which can be tough to do when your multiplatinum band the Goo Goo Dolls is set to headline the Fest on a stage that, by this point, has several inches of water on it and a whole bunch of incredibly soggy customers out in front of it. I mean, what could go wrong, right? (Well, electrocution, for starters.)

In the 15 years that Music is Art has been throwing its annual soiree – first in Allentown, followed by a brief and in retrospect ill-advised stop at the Erie County Fairgrounds, and finally, in its proper ideological and geographical home outside the A.K. – I've been absent only once, and that single absence was not by choice. It's a fantastic homegrown event. But of the nine years MiA took over the Albright-Knox/Delaware Park area, it rained heavily five times and was unseasonably cool at least one of the remaining four. That's not a good average.

When I arrived at Buffalo RiverWorks for the news conference announcing this year's MiA Fest, I had no idea what was going to happen, though perhaps the locale of the presser should've been a red flag. I figured Takac would be announcing a special performance, perhaps from a national act – maybe even another slot for the Goos. But no, the specifics concerning who will be playing this year remained under wraps. Instead, Takac announced that RiverWorks – the entertainment and sports complex on the site of the old grain silos along the banks of the Buffalo River – would be the site for the 2017 festival, which will take place on Sept. 9.

Once I got over feeling kind of dumb for missing the signs, my first reaction was: This is a smart move. The two-tier 60,000-square-foot space in the main building – which houses, according to buffaloriverworks.com, "the first permanent, purpose-built, flat-track roller derby track in the world; a martial arts dojo; four bars; a restaurant and a concession food area; locker rooms for sports leagues; restrooms and a kitchen" – will host the majority of the MiA action this year. It's a beautiful, open-plotted space, and it can accommodate 5,000 people. The surrounding spaces also offer cover in case of inclement weather, but are "outside," technically speaking.

"I think there are only two of the 15 stages that we'll need to tent, because the rest are under existing cover – rinks, silos, balconies, etc.," Music is Art Executive Director Tracy Shattuck said. So you can leave the garbage bag/rain poncho at home, folks.

It makes sense for Music is Art – our longest-running free, independent, grassroots music and art festival – to be part of the Buffalo waterfront renaissance. It's not difficult to imagine the festival growing – perhaps not to the point one of my Facebook friends was dreaming of when he said, "I hope this becomes Buffalo's version of (the Austin, Texas, mega-music industry fest) SXSW," but growing, nonetheless. Will there be more national artists intermingled with the strong local element? Anything seems possible with a venue that kicks the notion of being dependent on good weather to the curb.

The nine years in Delaware Park certainly offered their share of indelible memories. But this does feel like what Takac called it – "a rebirth."