The NCAA basketball tournament returns to KeyBank Center next week, bringing the same challenge as it did three years ago:  How to best move people back and forth from the arena to area restaurants, breweries and bars during the 90-minute intermissions between the two sets of games on March 16 and March 18.

More buffets would help, too.

Alyssa Sumers, general manager of Osteria 166 on Franklin Street, said basketball fans packed the restaurant during the 2014 tournament games and expects no different this time around.

"In between the games, we are doing the buffet to make it easy for people to come in, grab something to eat real quick and then head on out since they only have 90 minutes," Sumers said.

Tourism officials are polishing their plans for a friendly and efficient experience for visitors.

This is a big opportunity for Buffalo, said Patrick Kaler, president and CEO of Visit Buffalo Niagara. The tourism organization has met with hoteliers, restaurateurs and attractions operators to discuss what to expect during the three-day period.

Visitors will be told about nearby attractions, from Buffalo RiverWorks to Canalside, that are new or changed from when the last tournament was in Buffalo and special events that will be held, Kaler said. 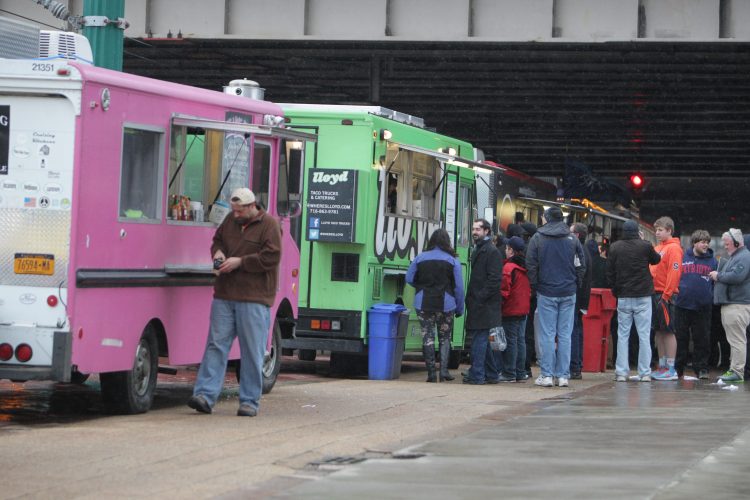 NCAA basketball fans leave then-First Niagara Arena to get dinner before the night session on March 20, 2014. Some got their dinner at the food trucks parked on Main Street. (Sharon Cantillon/News file photo)

"We have so many great new restaurants and attractions in the area since 2014," said Pete Harvey, director of sports development for the Buffalo Niagara Sports Commission. "Volunteers will be able to give out that information."

About 100 volunteers will be mobilized for the three days. Many will be stationed around town with "Ask Me" signs, so visitors can ask questions such as the location of a nearby restaurant or bar, where they are in relation to the arena or where to find a taxi or bus.

"We have a lot of our volunteers who have been with us for a long time because they look forward to these events because they're so much fun," said Cindy Kincaide, Visit Buffalo Niagara's director of industrial relations. "We're getting volunteers from all around the city, out into the suburbs."

Mandatory training will be held March 13 for last-minute instructions.

Information tables that include a restaurant guide, coupons and a free fan guide by The Buffalo News will be stationed in the airport, area hotels, the visitor center located on the corner of Clinton and Washington streets, and other locations downtown and near Key Bank Center.

Tweets with the hashtag #hoopsBUF will be sent out to provide up-to-date information, whether about restaurants offering quick seating, when a game will start or where to find available parking.

"In those 90 minutes, we want people to be able to find a burger and a beer, find somewhere to go and, even if there are fans from 2014, this whole area has changed so much and we want to tell them about that," Harvey said.

Kincaide worked with a tweet team three years ago to inform people when tables were open at Dinosaur Bar-B-Que and at eating establishments on Chippewa Street, and when parking lots had spaces available.

A taxi pickup site will be at Canalside on Hanover Street, in between Marine Drive and Prime Street. Signage and volunteers inside Key Bank Center will direct attendees looking for a cab to the location.

Additional cabs will be along Marine Drive, past Lloyd Street. Visitors can also order a cab by downloading the Curb app on their phones.

"A lot of people went to a lot of work to do this," said Bill Yuhnke, owner of the 416-fleet Liberty Cab. "It was great to see four or five agencies all together at one table to discuss the need." 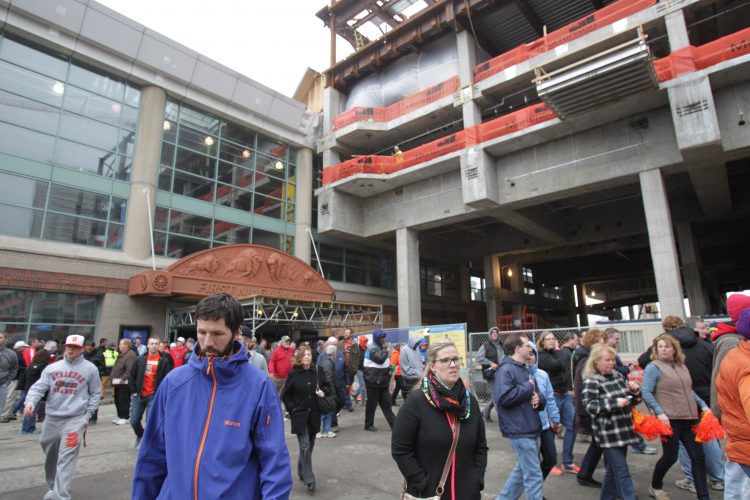 Yuhnke said he's going to start with 75 Liberty cabs. Other companies will deploy cabs, too.

"The big pressure is this one hour and a half during the lunch break. We'll have cars outside so when they're done with the restaurant we can have them back at the arena," Yuhnke said.

Starters will also be employed at the cab company's expense to help customers into the cabs.

"We want this to be a good event, and we're going to help take it to another level," Yuhnke said.

Yuhnke said he's hoping the arrangement will lead to a permanent taxi stand near Key Bank Center for future events.

Shuttle buses paid for by Chippewa bars and restaurants will also take people on a loop between KeyBank Center and Chippewa Street in between games. The staging area near the arena is still being worked out, Manno said.

More than 20 downtown restaurants have opened since the 2014 tournament, Kincaide said.

"HarborCenter and (716) wasn't there, or Pizza Plant, and that's just right by the arena," Kincaide said. "As you start moving out, there's just so much that's new."

Soho Restaurant will order more televisions on top of the 16 already in use. Owner Jay Manno hopes to be able to open the patio and use a screen that is 11 feet by 16-feet.

At the EXPO Market, general manager Melanie Klaja said it'll be a full court press for the expected hungry hordes.

"We're fast food but we're fast, fresh homemade food," Klaja said. "They can choose from the five restaurants and get counter service within 20 minutes, and then get back to the game. We're also right on the subway."

A street party on Friday, weather-permitting, will feature music and a DJ, games and vendors selling bite-sized appetizers.

Thursday night at EXPO will also have five local breweries offering 10 samples for $5 for the after-game crowd.

The Visit Buffalo Niagara Visitor Center, at the corner of Washington and Clinton streets, will give out Paula's Donuts shaped like basketballs to people who come in wearing the school colors of teams in the tournament. That will happen from 10 a.m. to 1 p.m. Friday, the off day between games.

Kaler said he's looking forward to visitors having a positive experience in Buffalo, which he said will pay positive dividends for the city and region.

"Word of mouth is so important in the travel industry," Kaler said. "If people do have a good experience, they go home and tell their family and friends, 'You have to go to Buffalo; we just had the greatest experience there,' so that just helps further our mission and goals."