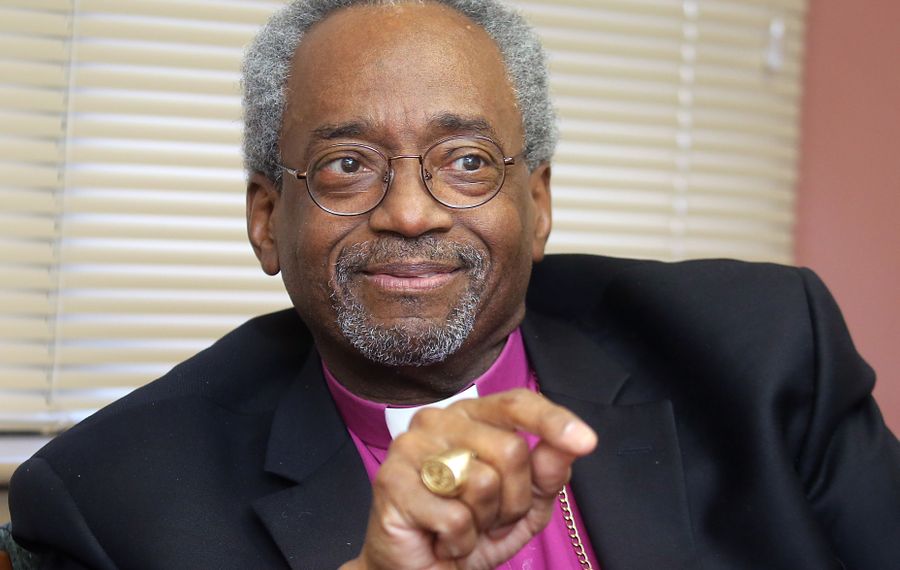 The Episcopal Church has survived the storms that swept the denomination in the past 15 years and is moving forward, Presiding Bishop Michael B. Curry said Saturday in Buffalo.

"That's the testimony of an ancient faith, that it's durable. It lasts," Bishop Curry said in an interview at the Diocesan Ministry Center in the Town of Tonawanda. "We'll weather it. We've already weathered it."

Bishop Curry grew up in Buffalo and graduated from Hutchinson Central Technical High School. He returned this weekend to help mark the 200th anniversary of St. Paul's Cathedral, the mother church of the Episcopal Diocese of Western New York.

Bishop Curry, the top bishop of the Episcopal Church in the United States, will preside at the 10:15 a.m. Mass Sunday in St. Paul's, Church and Pearl streets, as the climax of a busy weekend of events with local Episcopal laity and clergy.

Bishop Curry, who was bishop of the Diocese of North Carolina at the time, said he asked his pastors how many members left after the controversy over the gay bishop, and the numbers totaled 800 to 1,000 out of 49,000 Episcopalians then in the diocese.

"That pattern was pretty typical throughout the Episcopal Church. The noise around it was much disproportionate to the actual reality," Bishop Curry said.

He made his comments in a building that used to be St. Bartholomew's Episcopal Church before that congregation seceded from the diocese and moved to a different building.

Bishop R. William Franklin of the Episcopal Diocese of Western New York said a tiny congregation in Forestville was the only other local parish that split over the issue of gay ordination.

Judy Elliott, a member at St. Paul's Cathedral, said she thinks Bishop Curry has strong support from the people in the pews.

"He's very much down to earth, and right now he is exemplifying what he calls the Jesus movement and what we are supposed to be doing in the church, in reaching out to others. We're not supposed to be insular," Elliott said.

"Our job is to do our job," Bishop Curry said. "When the Episcopal Church focuses on why we're here - and we're here as followers of the way of Jesus of Nazareth, to actually follow his teachings and live them in the world and to make a difference in the world following his way - questions like church growth and all of that stuff, that will take care of itself."

The bishop said his denomination takes seriously Jesus' promise in the New Testament that he would draw all people to himself.

"This church wrestled with that around issues of human sexuality and finally, officially, was able to say, like the Bible says, 'We're going to be a house of prayer for all people for real,' " Bishop Curry said. "There are others who disagree with that, OK, but that's who we're going to be, that's who actually Jesus actually calls us to be. And I'm convinced that, in time, that's a way of faith that shows love and shows goodness, and that's a way of faith that commends itself."

Bishop Curry, 63, was elected presiding bishop in 2015, after 15 years as bishop of the North Carolina Diocese. His home continues to be in North Carolina, but a piece of his heart remains in Buffalo, where his family came from Chicago when he was 3 years old.

He has remained a lifelong Buffalo Bills fan and spent some time Saturday reminiscing about the Bills of the 1960s and about his early political involvement, soliciting votes for Robert F. Kennedy's 1968 presidential bid and going door to door on behalf of Assemblyman Arthur O. Eve.

Bishop Curry's father, Kenneth Curry, was rector of St. Philip's Episcopal Church in Buffalo, and his son was ordained a deacon in St. Paul's.

Josephine Robbins, a longtime friend of the Curry family, recalled a story when the future bishop was 10 years old and living on Hamlin Road in Buffalo.

"In the attic, he had set up a chapel, and all the little chairs they could find, and his sister Sharon's dolls were the congregation, and he would go up and celebrate Mass whenever he chose," she said.

When young Michael and his friends talked about their futures, Michael would say he was going to be presiding bishop, Robbins said.

"This was all in jest," Robbins said. "His father always tried to discourage him from becoming a priest. He said, 'You want to have a profession that will allow you to take care of your family. You don't want to be a priest.' "

Bishop Curry said he didn't decide on a clergy career until he saw how Martin Luther King Jr. was able to merge faith with social action.

"I knew I wanted to do something that had some social significance," he said.

Beth Boron of Grand Island, one of the lay leaders attending Saturday's luncheon with the bishop, said she remembers the young Bishop Curry, too.