Artists often work for free, trading their time and labor for the promise of exposure.

Much of America's cultural economy is built on this practice, which can enrich institutions and corporations while leaving artists struggling to pay their bills.

But one local organization is taking a stand for the creative class by promising to pay set minimum fees to artists and performers for their work.

As part of the certification process for W.A.G.E. , which stands for Working Artists and the Greater Economy, Squeaky Wheel has agreed to abide by a schedule of minimum fees and to include artist fees as a line item in its annual budget. The fees include a minimum of $1,000 for solo exhibitions, $150 to $500 per artist for group shows, $600 for commissioned performances and 25 cents a word for commissioned essays.

Those minimum fees, said Squeaky Wheel Media Arts Curator and longtime W.A.G.E. supporter Ekrem Serdar, will hardly be life-changing for artists that show their work in the downtown institution. But he suggested that they may set an example for other organizations which have traded too heavily on the goodwill of artists for the promise of exposure.

"We've provided an outlet for many, many artists over the years who have donated their work or shown for free because they wanted to," said Ekrem Serdar, Squeaky Wheel's media arts curator and a longtime advocate for the W.A.G.E. program. "I think this is basically a way for us to say 'Thank you, we want to keep you, we want to keep supporting you.' "

Serdar also positioned the program as a way to extend the positive effects of Buffalo's resurgence to communities that have not yet benefited from it.

In other industries, the idea of being paid for labor is a no-brainer. But for myriad reasons, including an assumption that creative work is a kind of effortless hobby rather than a serious pursuit, that notion has not fully penetrated the art world.

Buffalo artist Paul Lloyd Sargent characterized the W.A.G.E. program and Squeaky's commitment to it as the result of a decades-long fight among artists for fair treatment from the institutions that benefit from their work.

"It comes down to this bizarre refusal to pay a very simple artist fee because the assumption is that you get exposure," Sargent said. "It is really a strange thing to have to demand that you get paid for your labor from the institution that benefits from that labor. It's really odd that it's taken this long for anything to get started."

While local institutions have a better reputation for paying artists for their time and work, there is no set standard to hold museums, galleries and art centers accountable. W.A.G.E. and its specific fee formula -- which is based on the size of the organization's budget and its average staff salary -- has the potential to change that.

"It's a start," Sargent said," and if anything, it's a show of support that, little by little, organizations around the country are recognizing artists' labor as actual labor." 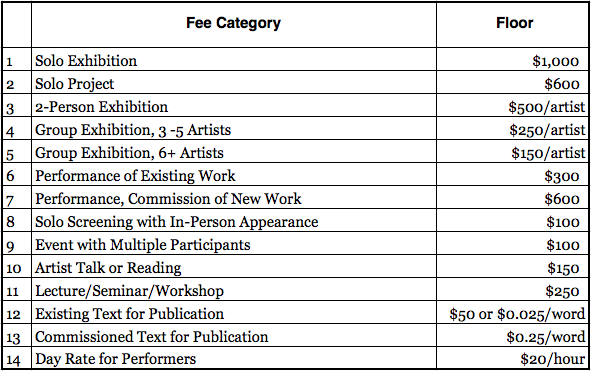 The W.A.G.E. fee schedule for small-budget organizations includes minimum amounts artists and others must be paid for their services.Tod A. Kniazuk, the executive director of the advocacy organization Arts Services Initiative, praised Squeaky Wheel's efforts

"I think it's a really good and interesting idea to have one our cultural organizations say, 'This is how we're going to pay the individual artists with whom we work,' " he said. "I think that sets a precedent and I hope that's something that can be pushed out to other organizations."

For arts groups with small budgets like Squeaky Wheel, many of which are artist-run and therefore attuned to the economic demands of artists, membership in the W.A.G.E. program is more of a statement than a radical transformation of the profession. But when budgets increase, for instance to around the $2 million level of an institution such as the Burchfield Penney art Center, so do the artist fees. For an organization with that size budget, an artist fee would increase to about $4,000.

Burchfield Penney curator and associate director Scott Propeack said that while the museum does not belong to the W.A.G.E. program, he sees value in the industry setting minimum standards for artist compensation. He also said that the Burchfield strives to meet "any fee an artist has."

"I think that the more organizations that sign up for it, since they're already going through steps, the better it'll be," Propeack said. "It's an important time for people to recognize the unity in the arts and not just institutions requesting funding at the federal level, but what are the arts groups doing to support the artists in the community?"

Given the current debate about national funding from the National Endowment for the Arts, which is on president Donald Trump's chopping block, Propeack said it may be time for arts groups to set their own example.

"If the arts organizations really want everybody to gather around them on behalf of NEA support, the institutions really should be trying to live up to that same expectation with themselves," he said.

As for Serdar, Squeaky Wheel's membership in W.A.G.E. offers a hopeful sign for artists hoping to earn more for the work they do.

"The way I approach curating and art in general is to be able to provide new ways of seeing, being, ideas and just a different way to imagine our future," he said. "But we can't imagine a fair future without taking everybody into account."