Randy Dullen thought he was a goner.

He had dropped about 12 feet down into the frigid Niagara River after his dog, Coco, had fallen off a dock into the water near 53rd Street in Niagara Falls. Dullen had managed to push his dog onto a piece of rotting wood sticking out of a retaining wall. But that effort, the cold water and the current had sapped him of his strength.

Dullen's fingers were turning purple. His muscles were stiffening up.

He couldn't climb out of the river and up over the retaining wall.

And he was screaming for help.

"I really thought I was gone. I almost gave up a few times ... I was so exhausted."

"I was talking to my dog. I didn't have anyone else to talk to," recalled Dullen, a disabled 59-year-old man. "I had just got married. My first anniversary is not coming up 'til June. I was telling Coco, 'I can't leave mommy yet.' "

"I was in the water at least 35 minutes. At least," he said Thursday.

"I really thought I was going to die." 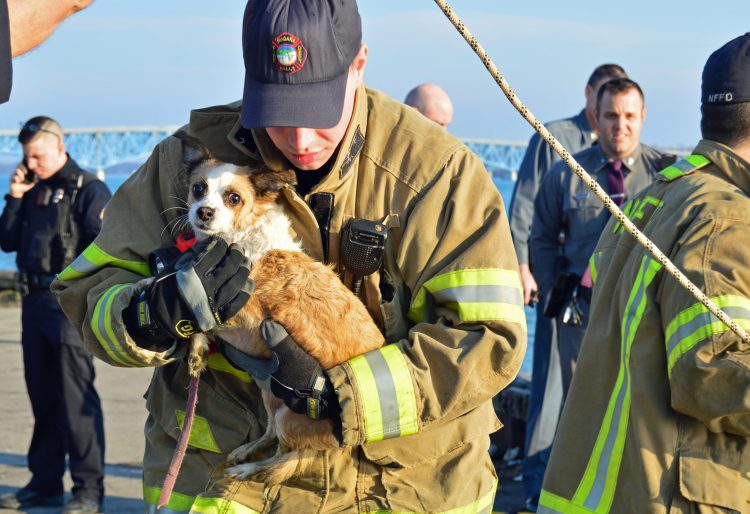 Greg Dusher, a Niagara Falls firefighter, carries a dog named Coco who was rescued Thursday, Feb. 23, 2017, from the Niagara River near 53rd Street in Niagara Falls. (Photo by Rob Bennett/RobShots)

Dullen, who lives in Niagara Falls, and Coco, a 4-year-old Jack Russell terrier, had gone for a walk Feb. 23 on a popular path along the river. They walked in the late afternoon from 53rd Street to the Grand Island Bridge and back. Coco, still on her leash, was drinking from a bowl of water next to Dullen's truck at around 4 p.m. when Dullen wandered over to the dock to look at the river.

Before he knew it, his pet had run over to the dock and fallen into the water. Without thinking, Dullen said he jumped in after her. He said he doesn't know how deep the river was, but it was over his head.

Dullen managed to grab the shivering dog, push her onto a wooden perch jutting out from the wall and wrap her leash around the wood so that she wouldn't fall back into the river.

"I know how to swim. But it's a completely different story when you hit that cold water and the current is trying to take you," Dullen said.

He kicked off his shoes and tried to stay afloat while trying to climb back up onto the dock.

"I kept trying to hoist myself up on this big tire tied to the side of the retaining wall. I could get my arms into the tire, but I didn't have enough strength. I couldn't pull myself up in it," he said.

"I'm screaming, 'Help, help.' I knew I passed some people and their dogs on the track," he said.

Eventually, a man with a dog spotted Dullen in the water.

According to Niagara Falls Police reports, Mark Woyksnar, also of Niagara Falls, threw the end of his long leash to Dullen, pulled him out of the water and called 911. 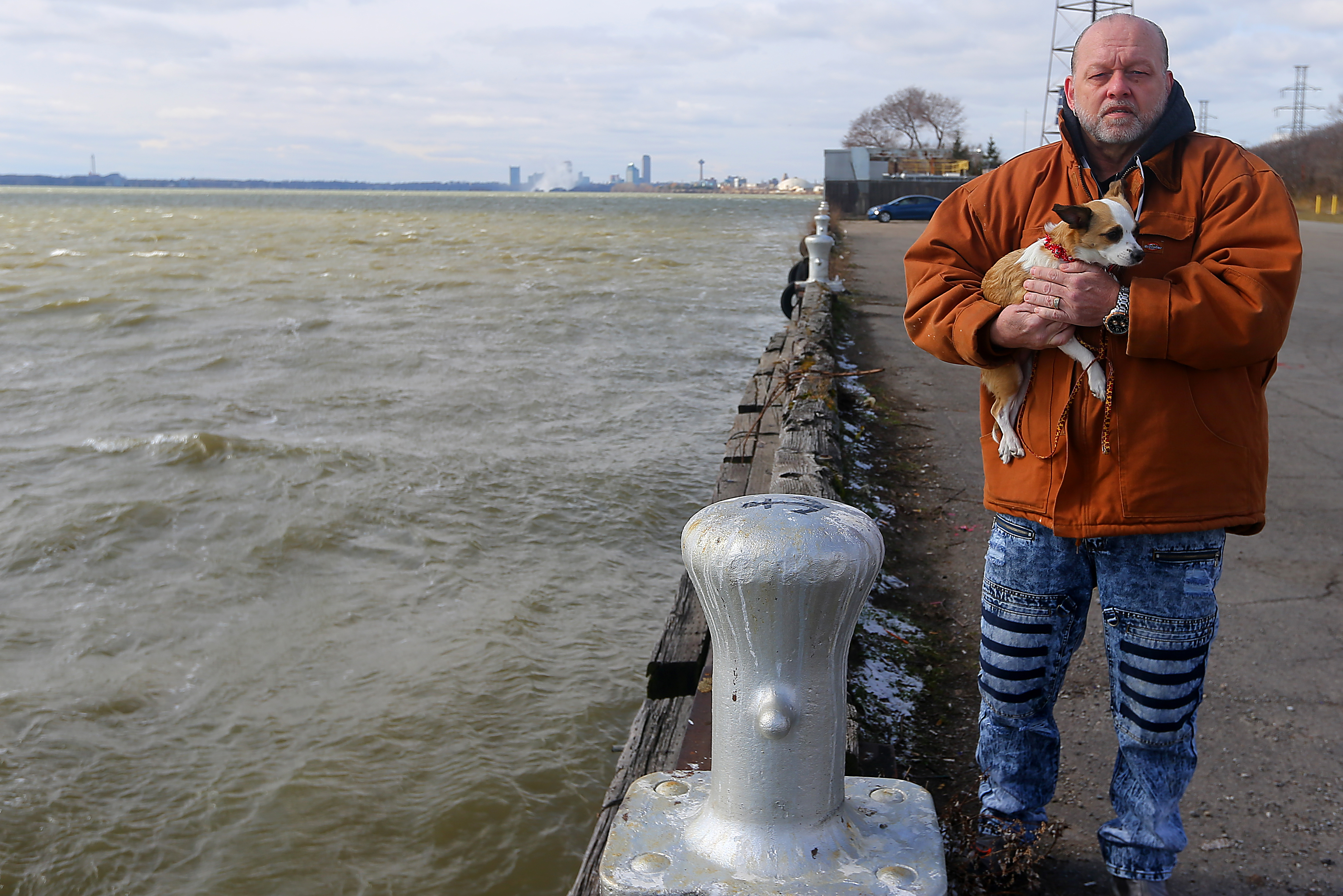 Randy Dullen jumped off this dock into the Niagara River after his dog, Coco, fell into the water at 53rd Street in Niagara Falls on Feb. 23, 2017. He was able to push his dog to safety, but Dullen was unable to climb out of the water himself. A passerby heard his yells for help and saved Dullen's life. (John Hickey/Buffalo News)

Niagara Falls firefighters and police arrived, stripped him out of his wet clothes, wrapped him in hot blankets, and sat with him for about 45 minutes in an ambulance, Dullen said. After some time, Dullen said he stopped shaking, his skin regained its natural color and his breathing became more regular. Rescue workers took his vitals and then released him to his wife, who had arrived with dry clothes.

Dullen said he doesn't regret jumping into the river to save Coco. But he does have one big regret.

In the excitement, he forgot the name of the passerby who rescued him. And he wanted to thank him again for saving his life.

"I want to thank him," Dullen said.