The emergency room at Erie County Medical Center looks cramped and dated. The public spaces are austere, and the treatment areas are small by today's standards. The facility was built to accommodate paper records, not computers.

And the only way for ambulances to gain access to the emergency room is a ramp that would cause backups if there were multiple vehicles from a mass casualty incident.

Little doubt exists among doctors and management at ECMC about the need for a new emergency room-trauma center. What remains unclear is how to pay for a larger department with modern features and patient amenities on the Grider Street campus. Erie County officials disagree over a borrowing plan to fund the project.

ECMC recorded nearly 70,000 visits to the emergency department in 2016, roughly double the number since the last time the emergency room space received a substantial renovation in the late 1990s. The medical center estimates that, on average, the department operates over-capacity 12 hours a day. Patients on stretchers often line the hallway because of a shortage of rooms, raising concerns over privacy and potentially leaving poor impressions. 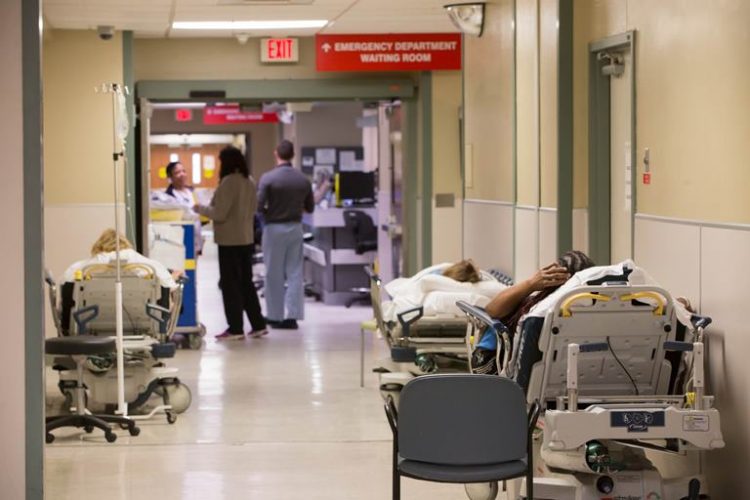 Patients with less immediate needs lie on gurneys in the hallway of the Emergency Department at ECMC while waiting for rooms to become available. (Derek Gee/Buffalo News)

"The public needs to recognize that the facility is fairly old, the volume has doubled in 20 years and we don't see that trend changing," said Dr. Michael Manka, chief of service for the emergency department. "Even if it does, the space now is inadequate for patients and the people who work there."

The 69,290 visits in 2016 included 12,247 patients that got routed to the hospital's adjacent Comprehensive Psychiatric Emergency Program, the only program of its kind in the region. ECMC also operates the region's adult Level 1 trauma center, an area of the emergency department staffed to treat the most extreme injuries, such as from car crashes, major burns and gunshot wounds.

The price tag for a new emergency department-trauma center is $58 million, but the plan is to borrow $100 million to make additional renovations to the hospital, including new boilers and generators. The emergency room would stand on ground-level on the west side of the hospital near the ambulance ramp, which would be razed. Plans call for a 54,000-square-foot facility with 54 treatment stations – including four dedicated trauma rooms, two behavioral health safe rooms, two isolation rooms and four medical resuscitation rooms. That's compared to the current 34 rooms in 26,000 square feet. 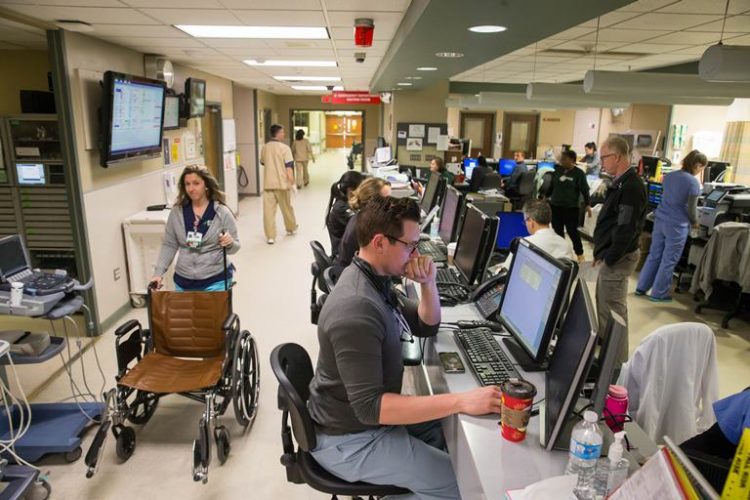 Staff crowds around the central workspace at the heart of the Emergency Department at ECMC. (Derek Gee/Buffalo News)

ECMC officials forecast increased emergency room visits over the next few years regardless of what happens in health care, including an initiative in New York state to reduce avoidable emergency room visits among Medicaid patients by 25 percent. Forces likely to increase demand include the growing proportion of the elderly in the population and the shortage of primary care doctors, officials said.

"Despite the emergence of urgent care centers, policies by HMOs and other efforts, emergency room volume is rising everywhere," Manka said.

ECMC's project should come as little surprise, considering emergency departments have been renovating and expanding across the United States. The emergency room has essentially become the front door of the hospital in a fast-food culture that wants medical care right away. Emergency department visits in the United States increased from 90.5 million in 1994 to 136.3 million in 2014, according to the American Hospital Association. There were 348 emergency room visits for every 1,000 people in 1994. That number jumped to 428 two decades later.

New facilities in this region have sprung up over the last decade at Buffalo General Medical Center, Millard Fillmore Suburban Hospital, Mercy Hospital, Kenmore Mercy Hospital and the Sisters of Charity-St. Joseph Campus. Women & Children's Hospital, the regional trauma center for children, will have a new emergency room when it moves later this year to the Buffalo Niagara Medical Campus.

One of the key areas of focus in newer facilities centers around improving efficiency at the front end of the process when patients register and receive triage. To that end, ECMC's plans to start care as soon as patients walk in the door of the emergency department. The idea is to keep patients from waiting for long periods in a waiting room, as well as to more quickly treat patients with minor ailments or injuries.

Other proposed features include larger trauma rooms that can better accommodate equipment that can be wheeled to a patient's bedside, private areas for patients and their families, and dedicated CT and X-ray equipment.

Construction on the project, which requires approval by the state Health Department, would start this summer and be completed in 2019, assuming the financing can be resolved. ECMC is organized as a public-benefit corporation and is no longer a direct part of county government. But the two remain linked.

Under a proposal by County Executive Mark Poloncarz, the county would borrow $100 million on the hospital's behalf because it can do so at a lower interest rate, but ECMC would pay off the loan. ECMC would give the interest savings to the county, which Poloncarz proposes using toward the tens of millions of dollars the county must give the hospital each year in payments for the care of poor and uninsured patients.

Poloncarz, a Democrat, has described the borrowing arrangement as a "no brainer" and nearly identical to the Terrace View Long-Term Care Facility borrowing deal adopted under former County Executive Chris Collins in 2011, which the Legislature unanimously supported. The plan, however, provoked opposition from the Legislature along political lines. Some legislators express concerns about the way the deal is structured.

Another possibility is to borrow the money through the Erie County Fiscal Stability Authority, which can also offer a lower interest rate than through traditional borrowing, but the term of the loan would have to be shorter because the control board by statute will exist only for another 22 years.

"The hospital is in a good financial position. We can do more traditional borrowing. But it's cheaper to do it through the county or authority," said Quatroche.

He said ECMC also has $2.5 million so far in a private fund-raising campaign for the project.