Hovering over wings and beers at the Swannie House on Ohio Street one night last week, the four friends didn't look all that deplorable. Scott Then and Robert Orlowski, both athletic and articulate at 45, sat kitty-corner to Cheryl Wehling, smiling and fresh-faced and, at 59, quick with a quip.

But then there was the matter of Phil Pantano and his T-shirt. The shirt expressed the feelings of them all to this very day.

The four friends summed up what eight other Trump supporters from Western New York said in interviews last week about the new president, who speaks to a joint session of Congress Tuesday night.

"He's doing everything he said he was going to do," said Pantano, 60, a computer analyst and photographer from the Town of Tonawanda.

Sure, Trump has suffered some stumbles, Pantano and the other Trump supporters said. Several said his executive order on immigration was poorly handled. Others said he speaks - and tweets - without thinking. Some see other rookie mistakes that have left Trump the least popular new president in the history of polling.

But none of that has shaken the confidence of the Trump die-hards.

They said most of Trump's troubles are not nearly as bad as the news media made them out to be. And besides, those stumbles stem from exactly what Trump supporters like about Trump.

He's not a liberal. And he's not slick.

"He's a terrible politician," said Then, a paramedic from Amherst.

To which Wehling replied: "Thank God."

What Trump is doing is by no means popular with the vast number of New Yorkers. A Siena College poll released Monday found that 59 percent of those polled in the state have a negative view of Trump, up from 55 percent a month ago.

Yet that poll also shows that even in deep-blue New York, Trump still has a loyal but limited following. Some 61 percent of Republicans said he was doing an excellent or good job.

And even some former Democrats -- like Pantano and Gary Pelletier, 62, a retiree from Buffalo who worked for decades at the Dunlop Tire plant in Tonawanda – heap praise on the new president.

"I think he's doing good," Pelletier said. "People are complaining that he's not doing enough, but I'm all for whatever he's doing."

Pelletier and many of the other Trump supporters interviewed last week said Trump's promises on the economy were among the central reasons they backed him.

And on the economy, they see a president keeping his promises.

Buffalo lawyer Jon Pierowicz, 32, cited Trump's public criticism of Carrier Corp.'s plans to move jobs overseas – and Carrier's subsequent decision to reduce the number of jobs it would be moving.

While critics said that was nothing more than grandstanding, Pierowicz said: "I think it sent an important message that those at the highest level of American corporate life have a duty beyond that of maximizing shareholder profit; they also have a duty to their fellow Americans."

Several other voters lauded Trump for following through on his promise to withdraw from the Trans-Pacific Partnership, a multi-nation trade deal that he said would cost American jobs.

"I'm thrilled about that," said Patrick Delaney, a 27-year-old Republican activist from the Town of Cheektowaga. "It would have been a killer for us."

Others cited Trump's decision to move forward with the Keystone and Dakota Access pipelines, which the Obama administration had nixed.

Connie Wolfinger, a 67-year-old real estate agent from Portville, said those pipelines will allow America to cash in on its energy wealth and make the nation less dependent on foreign oil.

All those moves have built confidence in the American economy, several of the Trump voters said, pointing to the stock market's recent rally as proof of their point. 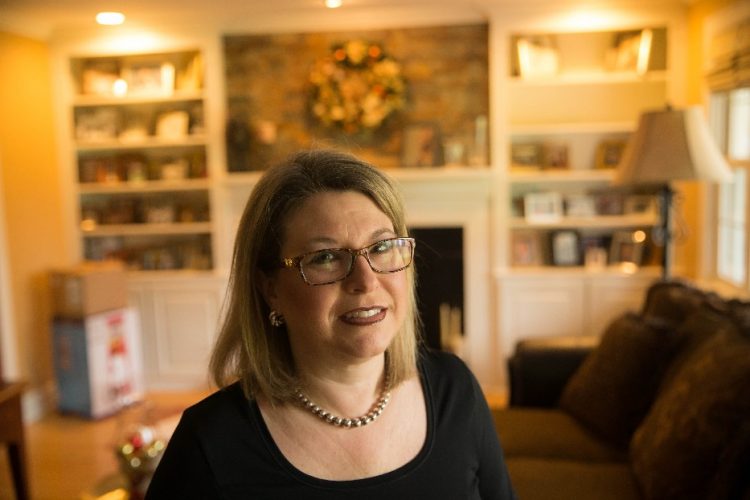 Kim Bowers, a Trump supporter from Orchard Park, said the threat of terrorism means "we live in a world where we have to worry about proper screening."
(Derek Gee/Buffalo News)

No worries over Russia

The local Trump supporters are standing by their man, too, on the issue that has dogged every day of his presidency: his administration's relationship with Russia.

"It's being blown way out of proportion by the media," said Orlowski, a firefighter.

The Trump supporters all accepted the fact that Russian hackers broke into the Democratic National Committee's computer system and used the information they stole to hurt the Democratic presidential nominee, former Secretary of State Hillary Clinton.

It just doesn't seem to bother them very much.

"She (Clinton) should have had a better firewall," Pelletier said.

Celeste Weursig, 67, of Cuba, argued that what the Russians were able to get through hacking the DNC – embarrassing emails that showed party officials favoring Clinton over her primary rival, Sen. Bernie Sanders of Vermont – is not that important.

"I don't think it matters compared with what Hillary Clinton did with an open mike on her emails," Weursig said.

Of course, Russia's involvement on behalf of Trump is only part of the story.

There's also the fact that Trump's first National Security Adviser, Michael Flynn, spoke with the Russian ambassador about Trump possibly easing the nation's sanctions against Russia. Flynn then lied to Vice President Pence about it. That prompted Trump to ask Flynn to resign.

Still, the reaction of most Trump voters appears to be: Nothing more to see here.

"At the moment, I've yet to see any policy enacted or decision made by the Trump administration that has benefited Russia at the expense of American interests," said Pierowicz, the Buffalo lawyer.

Other Trump supporters said it didn't bother them one bit that Trump has frequently praised Russian strongman Vladimir Putin. Several said that it would be in the best interest of the United States to become allies with Russia so that the two nations could fight their common enemy: ISIS, and radical Islam in general.

"Why should the U.S. and Russia be enemies?" Pantano asked.

And for her part, Wolfinger said she's more worried about the leaks that are damaging the Trump administration than she is about Russia. And she blames the leaks on America's intelligence agencies.

"I think our intelligence agencies, our CIA, are the biggest threat to the country," she added.

Several of the Trump voters expressed deep concerns about terrorism, and said that concern justifies the president's attempt to block travelers from seven mostly Muslim countries.

Those countries – Iran, Iraq, Libya, Somalia, Sudan, Syria and Yemen – either have unstable governments or Islamic governments. Weursig that means it's far harder to check on whether travelers from those countries are legitimate terror threats.

"The execution could have been thought through a little bit better," she said.

That seems to be the consensus among the Trump supporters interviewed for this story.

"I think that he's a president-in-training," said Battistella, who works at Buffalo Press Inc. "In real life he's a bit of a know-it-all, but I think he's realizing now that there's a learning curve, even for Donald Trump."

Yet that president-in-training is sticking to his promises on immigration. He issued another executive order that starts the process of building a wall at the Mexican border, while initiating a crackdown on the undocumented immigrants who are already here.

"Immigrants are wonderful, but I don't want the illegal ones," Wehling said. "I don't want us to look like Europe." 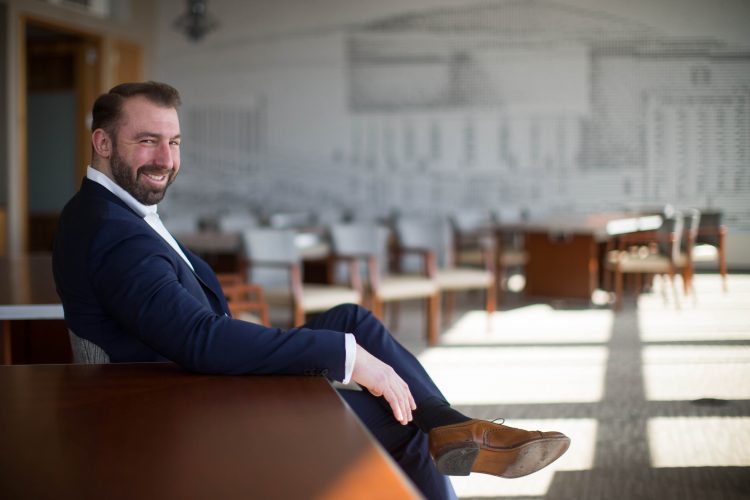 One thing that Trump supporters and opponent alike would likely agree upon is that Trump is, well, different than previous presidents.

He tweets. He gets into undiplomatic phone conversations with overseas leaders. And he called the media "the enemy of the American people."

Trump's supporters love all of this – while admitting that it worries them a bit at the same time.

"I think Donald Trump could tone down the rhetoric, but that is the reason people like him," said Delaney, the 27-year-old.

"It's like someone who's a drama queen, who exaggerates and embellishes," Wolfinger added.

Still, other Trump voters still seem to believe everything that comes out of Trump's mouth – even his implication earlier this month that there had been a terror attack in Sweden.

The PolitiFact fact-checking service rated that claim as false, but to Pelletier, the retired Dunlop worker, there was a larger truth that the fact-checkers ignored: problems in Sweden tied to its refugee influx.

"Trump knows that the rapes are up in Sweden," he said. "Tucker Carlson (of Fox News) had a story about it. That's an example of how falsely reported some of this fake news is."

By no means is Pelletier the only Trump supporter to voice such contempt for the news media. Asked point blank, none said the media, generally, is the enemy of the people.

Several, though, took aim at specific media outlets such as CNN, and most saw a left-leaning bias that had destroyed their trust in traditional news sources.

"I don't think they're the enemy of all the people," Weursig said. "They're just an enemy of the people who don't agree with the Democrats."

To hear the Trump voters tell it, the media – and the Democrats – don't understand people like them.

And the four friends who met at the Swannie House each offered evidence to that effect.

Then, the paramedic said a politician like Sen. Charles E. Schumer, a Democrat who has been in elective office since his early 20s, could never relate to someone like him because he's never had to worry every day about the future of his job. Trump could relate better, he said, because he's run a business and had to hire and fire people.

Orlowski, who is from North Tonawanda, noted that Trump and other Republicans understand what so many working people understand: "That the government can't continue giving things away for free."

Wehling, the retired medical assistant, said she thinks Trump has a more traditional view of American values than the Democrats do.

"It's not like I think he's perfect," she said. "But the alternative would have been disastrous."

Proof of that came, he said, when Clinton said: "You could put half of Trump's supporters into what I call the basket of deplorables."

The four people at the table at the Swannie House hardly seemed to be that. No one said anything racist or xenophobic. Pantano even voted for Obama in 2008.

Obama divided the country, Pantano said, when he took office and took a hard-left turn. And Clinton alienated voters like him even more when she dismissed them as potentially "deplorable."

That was the moment, Pantano said, when Clinton lost the election.