But Sam Hoyt said local officials who believe, based on conversations with him, that the Goat Island lodge proposal is dead haven't got the story right.

Niagara County Legislator Dennis F. Virtuoso said Hoyt told him that the state definitely will not build on Goat Island.

Hoyt said that's not quite right.

Niagara County officials to Cuomo: No lodge on Goat Island

"There will be an RFP (request for proposals) issued that emphasizes multiple locations for consideration for a lodge within the four state parks in Niagara Falls, meaning that all of this emphasis on Goat Island is inappropriate, because when we issue the RFP, it'll be clear that any number of locations within the four Niagara Falls state parks will be considered, and there will be a very robust public input period. I didn't say that Goat Island will not be considered," Hoyt said.

Developers will be able to suggest their preferred sites.

"The public will participate in that process, and public opinion, as always, will be taken into consideration once a decision is made," Hoyt said. "Goat Island is among multiple options in the four state parks in Niagara Falls." 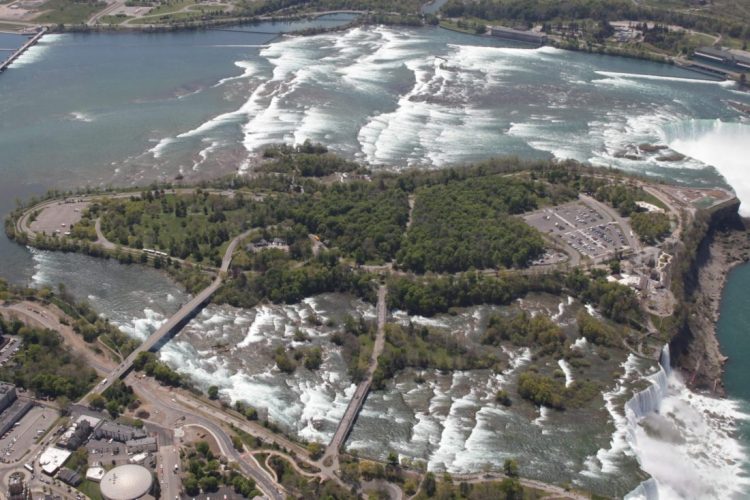 The grand lodge was proposed for the parking lot area at left in this aerial photo of Goat Island. (John Hickey/Buffalo News)

"Having assurances from the governor's office that they were going to take public input into account, I can't imagine in what circumstances you would put in a proposal for a lodge on Goat Island, in light of all the controversy," Niagara Falls Mayor Paul A. Dyster said.

That controversy has taken the form of criticism from preservationists and environmentalists who want to protect Goat Island, which splits the Niagara River above the falls into American and Canadian rapids, as a nature preserve.

Criticism flared up in the wake of Cuomo's proposal for a Goat Island lodge in his State of the State speech in Buffalo, reiterated in a later appearance at a Niagara Falls hotel opening.

Dyster issued a statement Friday that said, "Goat Island is only one of several locations that could be considered as an option for a lodge. I am confident that we can find a location that residents and visitors alike will find more suitable."

The Niagara Falls City Council unanimously passed a resolution opposing the Goat Island lodge Tuesday night. However, Virtuoso, a co-sponsor of a similar resolution at Tuesday's Niagara County Legislature meeting, tabled it because of what Hoyt told him.

"I received a phone call from Sam Hoyt and he asked me to take the resolution off the agenda," Virtuosa said. "I said I wouldn't do it because we didn't want the lodge on Goat Island. He said, 'Goat Island's off the table. We're considering other sites. We're going to do an RFP and we're going to have public input.' "

Virtuoso said he told Hoyt he was taking that approach "in case you guys don't do what you say." Virtuoso added, "That resolution will be on the agenda for the next meeting."

[Gallery: A look back: 300 years of Niagara Falls]

The Niagara Falls Democrat said he was told that Empire State Development "will come back with several proposals for a lodge in the state park. I didn't have a problem with that. It won't be on Goat Island, that's the main thing."

"It may have been misinterpreted in translation. I made it abundantly clear that the emphasis shouldn't be on Goat Island, that multiple options within the four state parks in Niagara Falls will be considered," he said.

A grand lodge on Goat Island? Park advocates say 'no'

Dyster said the best place to build a lodge is "on the border of the state park, on the city side of the line." He proposed reconstructing Schoellkopf Hall, a long-vacant former school building which is located in northern Niagara Falls in DeVeaux Woods State Park.

"I want to see it on private property. That way it'll pay taxes," Virtuoso said.

A lodge on state park land would be exempt from property taxes, but it would pay sales taxes and the city's "bed tax" on hotel and motel bills, ESD spokeswoman Laura Magee said last week.