Huge crowds of raucous progressives and quieter conservatives overwhelmed Rep. Tom Reed's town hall meetings in Ashville and Cherry Creek Saturday morning, with the progressives repeatedly interrupting and shouting down the congressman's comments as he tried to defend Republican plans to repeal and replace the Affordable Care Act.

The crowd in Ashville, in Chautauqua County, was so large that it was moved out of the senior center where it was scheduled and into the parking lot outside. There, Reed  patiently worked - but failed - to maintain order.

"We do not always agree," the Republican Congressman from Corning told the crowd at the outset of the meeting. "As we have disagreement, let's make sure we have it in a respectful, safe way."

But decorum broke down as Reed described replacing Obamacare with a conservative plan that would include health savings accounts.

Similarly, as Reed tried to elaborate on the Republican health care plans, another chant broke out.

Meantime, others in the crowd -- men wearing NRA and Infowars baseball caps, women in parkas who refused to speak to reporters -- stood silently by in the chilly sunshine, frowning.

One man in a  plaid shirt and black baseball cap tried to calm the crowd.

"Let him talk," he shouted. "Be respectful."

Despite the constant interruptions, Reed remained steady throughout.

"We are not advocating to go back to pre-ACA," he said.

He said that key features of the Affordable Care Act -- like coverage for pre-existing conditions -- will continue under Republican reforms.

He also predicted that the reforms will end up "freezing Medicaid where it is in New York" -- despite a Republican proposal to repeal the Medicaid expansion that added millions of New Yorkers to the government-funded health care program.

But health care clearly wasn't the only issue on the minds of the progressives in the crowd, who interrupted Reed's comments on health care with the chant: "Taxes! Trump! Taxes! Trump!"

That was a reference to President Trump's refusal to release his income tax returns.

Reed recently voted in committee against legislation that would have forced Trump to release his tax returns, and when he mentioned that, the crowd drowned him out with boos.

When he tried to explained, they drowned him out again. 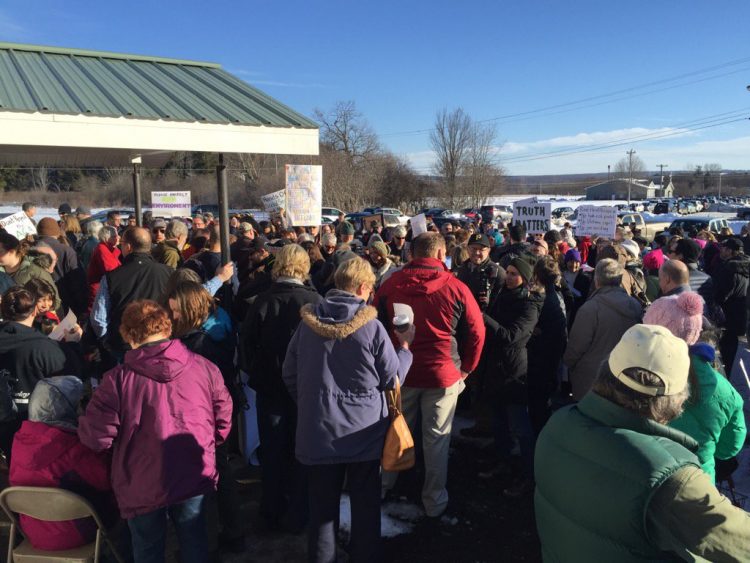 Finally, Reed was able to get a few words in edgewise.

"That is a tremendous amount of power, for the government to come after one individual" and make public their tax returns, he said.

Noting that the crowd and the congressman were destined to disagree on the Trump tax issue, the crowd responded with chants of "Russia! Russia!"

That was a reference to contacts, reported by the New York Times, of the Trump campaign's contacts with the Russian government, as well as Trump's praise of Russian strongman Vladimir Putin.

Reed then tried to pivot toward Medicare reform, another key Republican priority that would give seniors vouchers to shop for health insurance.

"I like my Medicare the way it is," a woman replied. "No vouchers."

Reed then patiently explained that a hybrid system is possible, where Medicare could continue as it is for those who want it while seniors who want to go on the open insurance market could do that instead. 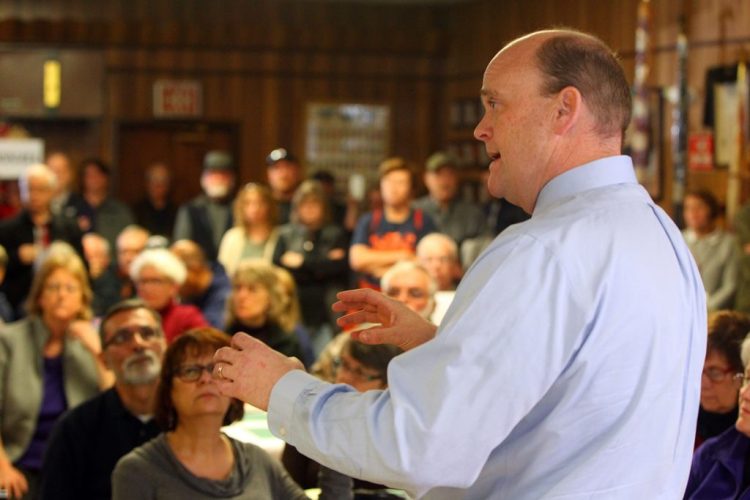 The congressman tried to take questions from individual members of the crowd - including a 10-year-old girl who asked if he wanted to disband the Environmental Protection Agency.

"Let me look you in the eye and tell you: I do not support reporting and removing the EPA," Reed replied, saying that instead he  favors repealing onerous EPA regulations.

That scene later repeated itself later as a crowd of about 200 people filled a VFW hall in Cherry Creek, also in Chautauqua County, mostly to confront Reed.

Bearing signs that said "Repair Not Repeal!" and "Disagree," the people in the crowd seemed most concerned about the repeal of the Affordable Care Act, just as they were in Ashville.

Several members of the audience in Cherry Creek shouted out that they prefer a single-payer, government-run health care system.

Reed told the crowd that under Republican plans, some people will receive tax credits to help pay for health insurance. That prompted shouts from the crowd, asking how those tax credits would be paid for.

"That is something we're still working on," Reed conceded.

That prompted shouts of "Raise taxes! and "No new taxes" -- in what was one of the few moments during the first two town meetings where a conservative voice was heard.

After the Ashville town hall, Trump supporters expressed disgust that their point of view was not heard.

Mel McGinnis, spokesman for the Tea Party Patriots of the Southern Tier, agreed.

"Here it's just a frenzy of anger and rage," said McGinnis, of Frewsberg. "It was not what you want to hear, which is a discussion of the issues."

Progressives insisted, though, that they had good reasons to speak out.

The Ashville event was the first congressional town hall ever for Andrew Maggetti, 63, of Fredonia, who arrived carrying a pink sign saying: "No changes to Medicare and Social Security."

"My presence will voice my opinion even if I don't get to ask a question," he said.

Maggetti said his sympathies were with the Ashville crowd, which appeared to be mostly anti-Trump.

Proof of that came late in the Ashville town hall meeting, when the crowd turned the topic back to the Russia. Reed tried to explain that he had discussed the issue with Trump and came away satisfied there are no improper connections between the president and Russia.

To which the crowd responded with what seemed to be its mantra regarding the new president.