One of the nation's best-known forensic pathologists helped determine that Holding Center inmate Richard A. Metcalf Jr. was suffocated by jail deputies and did not die of a heart attack as the Erie County medical examiner found in 2012.

Dr. Michael M. Baden, who has surfaced in some of the nation’s best-known homicide cases, holds a seat on the State Commission of Correction’s “Medical Review Board,” a seven-member team that reviews in-custody deaths and examined Metcalf’s demise.

Baden and the Medical Review Board concluded that Metcalf was suffocated by the jail deputies who knotted a spit mask around his neck and covered his head with a pillow case. Deputies then placed Metcalf on his stomach, making it more difficult for him to breathe, the review board said, and prevented ambulance medics from examining him for several crucial minutes.

The review board includes two forensic psychiatrists, two physicians and an attorney. Its leader was a pediatrician and psychiatrist, Dr. Phyllis Harrison-Ross, who died in January at the age of 80.

Baden is the panel’s only forensic pathologist and is trained to investigate unnatural deaths.

If any of the Holding Center deputies involved ever face a criminal trial, lawyers likely would call Baden to the witness stand to explain why he believes asphyxia killed the inmate, not a heart attack. Baden has examined some 20,000 dead bodies.

But there’s a flip side.

“There is no doubt that he is a formidable expert and his reputation precedes him. But that does not at all make this case conclusive in any way,” said Thomas Eoannou, a local defense lawyer not connected to the Metcalf matter. “If you look at the Phil Spector case, he was very effectively cross-examined and his opinion was rejected by the jury.

“With his stature also comes 35 years of transcripts that can be reviewed,” Eoannou said of Baden, “and attorneys have effectively cross-examined him on those transcripts.”

Testifying for the defense in the 2007 murder trial of record producer Phil Spector, a California prosecutor asked Baden if he had any conflict of interest in the Spector case.

“None that I can think of,” Baden answered, according to a Los Angeles Times account frequently quoted in articles about the pathologist.

It was soon revealed that Baden’s wife was a lawyer on the Spector defense team.

In Spector’s defense, Baden presented a new finding that the homicide victim lived for several minutes after a bullet shattered her spine. That gave credibility to the defense claim that the woman shot herself and blood was spattered onto Spector’s jacket when he leaned in to check on her and she coughed blood in his direction.

Baden began his career by working his way up the ranks of the New York City Medical Examiner's Office, and eventually became chief medical examiner, though then-Mayor Edward Koch dismissed him in 1979.

Baden couldn’t “work within the system,” Koch testified when Baden sued for damages. Baden worked as the deputy medical examiner in Suffolk County on Long Island and then for the New York State Police as co-director of its “Medico-Legal Investigations Unit.”

When hired by the Congressional Select Committee on Assassinations, Baden played a leading role in re-examining the slayings of John F. Kennedy and the Rev. Martin Luther King Jr. He was on the team of U.S. forensic scientists who, at the Russian government's request, examined the remains of Tsar Nicholas II, Alexandra and the Romanov family found in Siberia in the 1990s.

He has been an expert in death investigations concerning, among others, Medgar Evers, John Belushi, Yankee Manager Billy Martin and the victims in the O.J. Simpson trial, offering his services in that case to the defense team.

In 2014, Baden examined the body of Michael Brown, a black teenager whose death at the hands of a white police officer in Ferguson, Mo., touched off a national firestorm. After examining the body at the request of Brown’s family, Baden told the public he found six gunshot wounds, suggesting excessive force was used on the teen.

For 13 years, Baden was host of the HBO series “Autopsy,” which demonstrated how the forensic sciences assist in solving crimes.

Baden has turned up in Buffalo cases. In 2008, then-District Frank J. Clark asked Baden to re-examine the death of 13-year-old Crystalynn M. Gerard after her mother, Lynn DeJac, won the right to a new trial. DeJac served more than 13 years behind bars in her child's death and might have faced a new trial until Baden concluded the victim died of a cocaine overdose, not strangulation. Baden’s finding solved a dilemma for Clark, who was unable to prosecute a likely suspect in the death because he had been given immunity for his grand jury testimony.

In the 1996 strangulation death of Mark Virginia, a case that put a Buffalo police officer on trial, Baden testified for then-DA Kevin Dillon, backing up the findings of two other pathologists. Virginia, all three determined, died from asphyxia as a result of pressure placed on his neck while handcuffed and lying face down on the street. But the  defendant, Lt. Gregg. G Blosat, was acquitted. 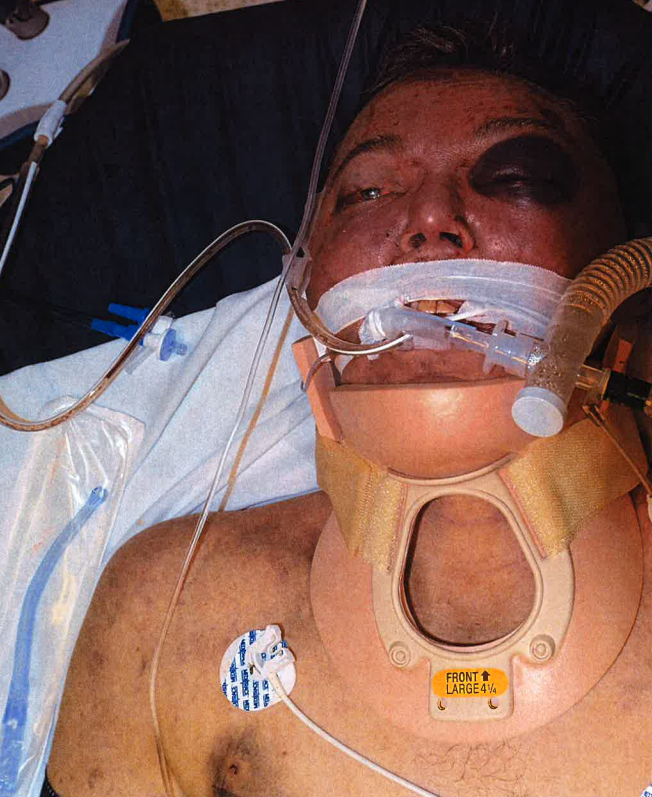 The Commission of Correction's Medical Review Board noted the red marks left by strings tied around Richard Metcalf's neck.

In determining that Metcalf died of asphyxia, Baden and the Medical Review Board relied on autopsy photos that show what appear to be ligature marks across the victim’s face and neck. The team read reports that an EMT found the strings of a spit mask had been tied so tightly he couldn’t squeeze a finger between the strings and the skin on the patient’s neck. When the EMT finally cut off the mask, the patient was in cardiac arrest.

As the Medical Review Board’s forensic pathologist, Baden examined microscopic slides obtained during the autopsy and found nothing to indicate a heart attack, or an acute myocardial infarction, as it is referred to in the Commission of Correction’s final report. Baden also noted Metcalf’s broken ribs and said they were unlikely to have been fractured during efforts to revive him with CPR.

After seeing the chemical analysis of Metcalf’s blood, Baden emerged squarely opposed to the findings by the Erie County medical examiner at the time, Dr. Dianne R. Vertes. In her report, Vertes said Metcalf’s many injuries and his pre-existing health problems contributed to his death, and ruled the case a homicide.

But the chief cause, she said, was a heart attack. Baden said the blood analysis revealed evidence of respiratory acidosis, another indication that the ultimate cause of death was “suffocation due to airway obstruction and compression of the chest.”