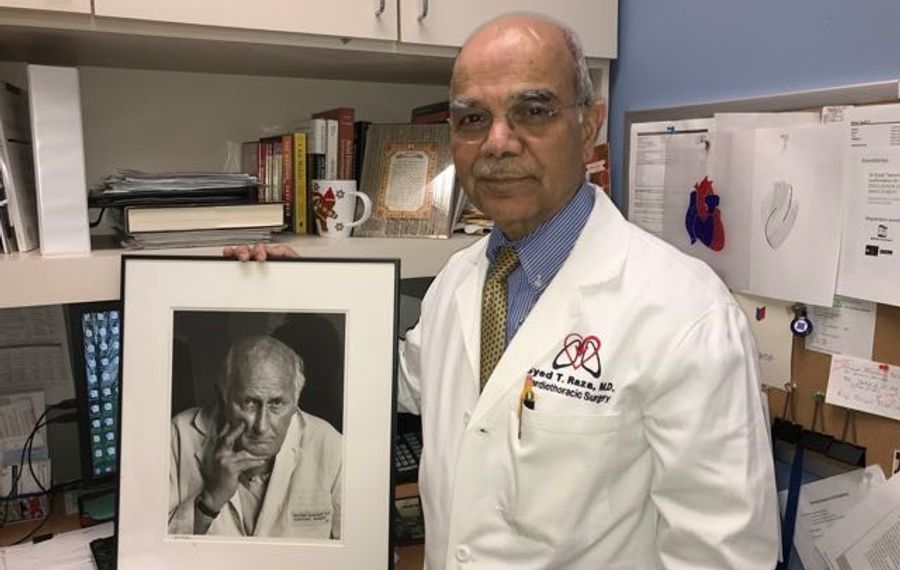 I reached Dr. Syed Raza by telephone last week. I was trying to find the man who saved my father’s life.

Was it Raza? Neither of us could be sure.

What is beyond question is that Raza extended hundreds, even thousands, of lives in Buffalo.

He is a cardiac surgeon. He speaks with awe of the feeling when you operate upon a human heart, when you see a heart that was stilled for surgery resume beating again, when you watch as that beating “becomes stronger and stronger.”

It is a miracle, the gift of life itself.

Raza, 70, is with the Columbia University Medical Center in New York City. Most of his career was spent at what is now called Buffalo General Medical Health Center. He learned from Dr. George Schimert, his teacher and mentor, the man Raza describes as the father of open heart surgery in Western New York.

“I love Buffalo,” said Raza, a Bills fan whose children grew up in Cheektowaga and Snyder. He was a surgeon at Buffalo General from 1972 to 2005, when he left to start a new heart program in West Virginia. He is now at Columbia, where he manages postoperative cardiac surgical patients. He enjoys the chance to learn about their everyday lives and priorities.

Over the years, he met some 8,000 other patients in the most intense of ways: He caused their wounded hearts to beat again.

Raza is going through some anxious days. He spent almost his entire childhood in Pakistan, raised as a Muslim, and became an American citizen 40 years ago. He remains stunned and upset by the new executive order that keeps out travelers from seven predominantly Muslim nations. If the ban survives court challenges, White House Chief of Staff Reince Priebus has said Pakistan might be added to the list.

“I have six siblings, we all came here, we’ve all done well,” said Raza, who believes existing background checks for immigrants and refugees have proven to be fully adequate. “We’re all scared. We’re all confused.”

One of his sisters, Dr. Azra Raza, is an adviser to former Vice President Joe Biden on his “moon shot” campaign against cancer. The family's Buffalo connection was prominent in an article Azra wrote last summer for Stat, a health-oriented website, that praised the role of immigrants in America. She spoke of the days when she worked at the Roswell Park Cancer Institute, how the death of a young mother with leukemia who was raising twins caused Azra to dedicate her life to studying the disease.

She noted how three of her siblings went into medicine, how they’ve spent careers “enriching, prolonging, and saving American lives.”

Yet that same sister needs to carry a letter of verification from several elected officials, Raza said, because she is so often detained and questioned in airports when she travels.

Raza said he remains optimistic, a believer in American ideals. He describes this nation “as a great experiment that has gone on for 240 years, and will keep going.” He recalled how he grew close to many friends and neighbors from a multitude of backgrounds in Buffalo, which he saw as a crucible of diversity.

“I try not to dwell on the negative sides,” he said. “Most Americans are wonderful. I can’t see them changing. As Dr. King said, ‘The moral arc of the universe is long, but it bends toward justice.' We’re always moving toward bettering ourselves. Yes, we have dark chapters, but we laid out the ideals we still follow in the Declaration of Independence.”

I sought out Dr. Raza while trying to solve a family mystery. In the mid-1970s, when I was in high school, I hurried to Brooks Memorial Hospital in Dunkirk. My father, a coal handler for Niagara Mohawk, had suffered a massive heart attack. My mother, a child of immigrants from Buffalo, met me outside the emergency room. I remember blue skies, brilliant sunlight, hard news on a gorgeous day.

My mother - a woman who typically contained her emotions - was clearly frightened.

All of it made me realize: My father might die.

He didn’t. He lived for another 13 years. He lived because he had triple bypass surgery in Buffalo. I remember being in awe when I realized the scope of the operation, how they peeled back my father’s rib cage, how they constructed bypass grafts – using arteries and veins – that pumped fresh blood into his heart.

My father had always been robust, a guy who could fix anything, a guy unafraid of heights. But the heart attack left him pale, in pain, unable to push himself too hard. After the bypass, he went back to climbing ladders and doing what he had always done, which is how he lived until his death, in 1988.

As the years went by, I realized I didn’t know the name of the surgeon who gave him back his vitality.

All I knew was that my dad – who grew up at Father Baker’s orphanage, who learned to operate heavy equipment in the Civilian Conservation Corps, who was a union steward at Niagara Mohawk – told me a surgeon born overseas had saved his life.

The records for that surgery are gone, destroyed. My father’s general practitioner died long ago. The hospital got rid of the documents in the 1980s. But the “open heart” surgery team in Buffalo, in those days, was relatively small. A hospital spokesman put together a list of names. Some had died. And many came from other countries.

Dr. Syed Raza is still practicing, in New York City, where he took my call. After thousands of surgeries, he could not answer the unanswerable: He didn’t know if he was the doctor who repaired my father’s heart. 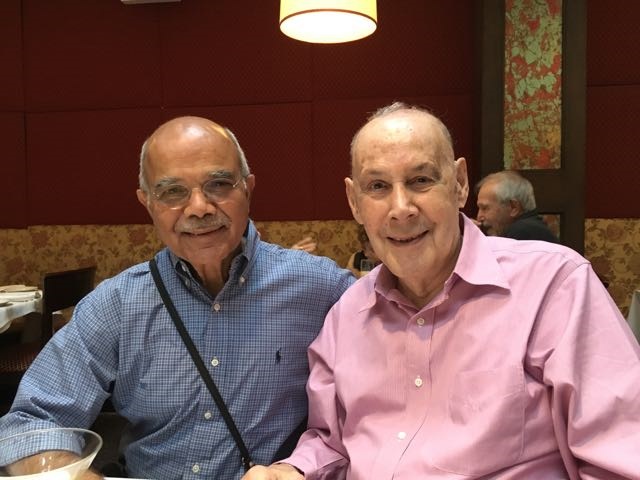 Dr. Syed Raza on a recent visit with a man he describes as "a second father:" Dr. Richard Adler, who trained Raza in chest surgery in Buffalo. (Photo courtesy Dr. Syed Raza)

Instead, he spoke with passion about the work done in that era by the cardiac surgery team in Buffalo.

“This is how you look at it,” he said. “For your entire life, your heart pumps blood to your body. It works very hard. Try to make that same motion with your hand. You can’t do it for much more than five minutes, without stopping. But think of it: The heart never stops.

“Because it never stops, because it never takes a break, it needs a very rich blood supply. When the coronary arteries become narrower and narrower because of fatty deposits, your heart suffers. You feel pain. That is when the heart is crying. So if we can bypass those arteries with arteries from the breast, or sometimes from the leg, the blood returns to your heart.”

Raza was born in India. His family moved to Pakistan in 1947, when Raza was an infant, on the day that nation was created. When he was 16, he went with his mother to the Seventh Day Adventist Hospital in Karachi, where she had a prenatal appointment. In the waiting room, he watched a film of Dr. Albert Starr – shown on closed circuit television – as he successfully implanted an artificial valve in a human heart.

At home that day, the young Raza sent a letter to his sister Amera: “This is what I want to be,” he wrote of cardiac surgery.

It happened. He went to medical school in Pakistan, then settled in Buffalo. In November 1973, he became part of the heart surgery rotation. Most of the doctors on that team, he said, came here from abroad. He witnessed the transition as an operation once seen as miraculous became far more familiar ….

But never routine. Whenever Raza repaired a silent heart, a heart-lung machine kept blood flowing to the patient's body. Then came the moment Raza witnessed thousands of times, the moment when the dormant heart reawakened, when it again started to beat.

Imagine, he said: It was life itself. How many people in greater Buffalo received years, if not decades, of life free of fear or pain? How many saw their children married, or held their grandchildren, or celebrated anniversaries because Raza and his colleagues, in the most literal of ways, had touched their hearts?

Among the thousands of patients treated by that team: My father.

Lorie Mariano, senior director of vascular procedural services at the Gates Vascular Institute at the Buffalo Medical Health Center, said it was a quiet revolution: "Before bypass surgery, the only course of treatment (for severe heart disease) was bed rest. It was a lifesaving operation for those folks. Many people who had it definitely would not have lived without it."

Today, if Raza could snap his fingers and again be a young surgeon, he couldn't be sure of the way he would be welcomed to this nation. He struggles to understand the sweeping travel ban against so many Muslim immigrants and refugees. The parents who raised him, the people who taught him, “have the same principles as most Americans,” he said. He does not keep company with terrorists, but he keeps company with many physicians from abroad who have saved too many American lives to count.

Still, he remains optimistic. He sees Buffalo as a great and welcoming American city, symbolic of a pulsing national heart of love and grace. Credit this to his faith in healing and in medicine:

He was trained to believe such a heart cannot be stilled.

Sean Kirst is a contributing columnist for The Buffalo News. Email him at seanpeterkirst@gmail.com or leave a comment below, and read more of his work in this archive.