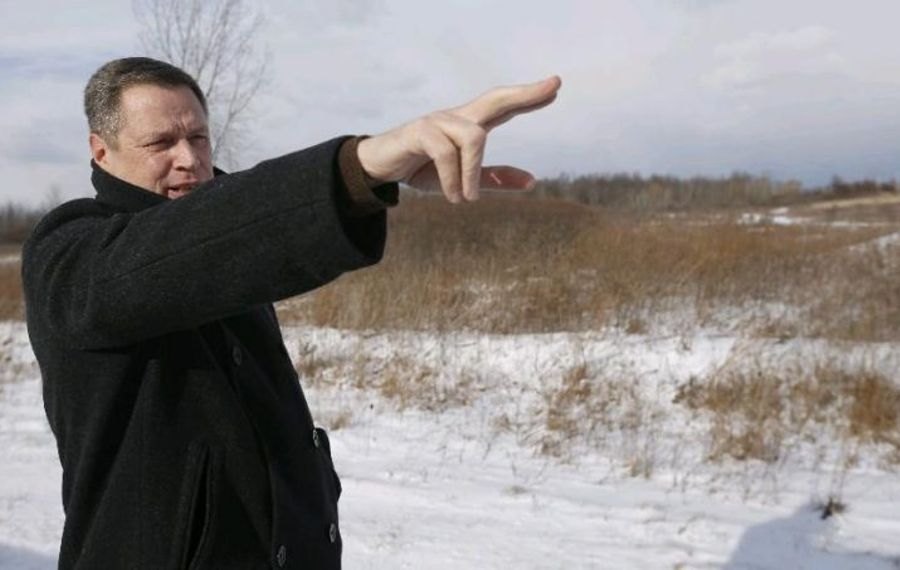 “This comes straight up north through Western New York, through its streams, waterways and hilly terrain – there are just all kinds of potential perils to the environment,” said Diana Strablow of the Sierra Club’s Niagara Group.

She cited increased risks for natural gas leaks polluting water and land as well as methane in the atmosphere adding to the danger of climate change.

“It doesn’t do anybody any good to drill natural gas in north-central Pennsylvania if you can’t get it to market,” said Ron Kraemer, the senior vice president of National Fuel's Gas Supply Corp. and president of the existing Empire Pipeline. “We need to move it to where people use it.”

In addition to the new pipeline, National Fuel would also:

• Upgrade its existing 1950s-era natural gas compression station in Porterville from 600 to 6,000 horsepower.
• Install a new 22,000 horsepower compression station at the site of the Tonawandas Sportsmen’s Club on Killian Road in Pendleton.
• Build a gas dehydration facility along the Niagara River in Wheatfield.
• Construct two miles of pipeline in Pendleton to connect with the Empire pipeline.

Local environmentalists and some landowners are among those expected to make their case at three public proceedings hosted by the state Department of Environmental Conservation starting Tuesday.

The hearings, all scheduled to start at 6 p.m., will be held on Tuesday at Doyle Hall at St. Bonaventure University in Olean,  on Wednesday at Iroquois High School in Elma and on Thursday at Niagara County Community College in Sanborn. 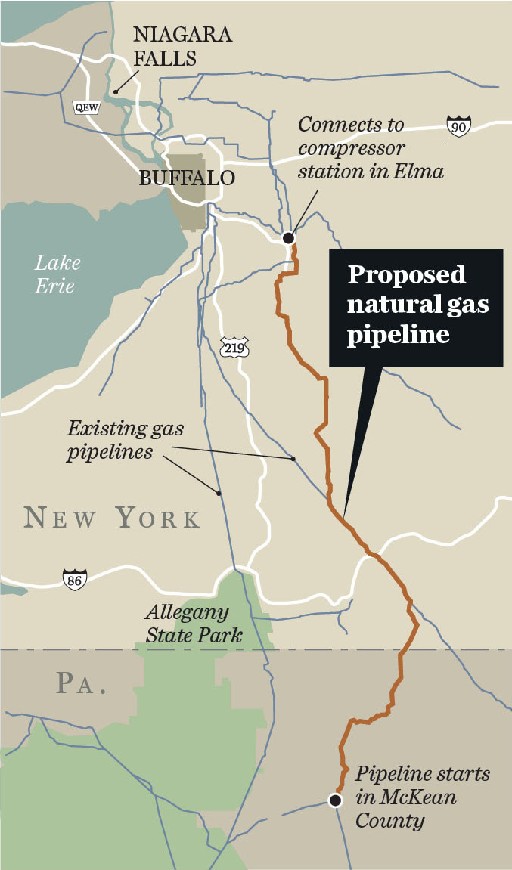 The DEC will decide whether to issue air and water permits for the project using information from the hearings, other public comments and documents submitted by National Fuel. The department's decision is the final major hurdle before construction could start.

“A lot of this is sort of an anti-fossil fuel pushback,” Kraemer said. “That is the core of who is left. We can’t battle that. I can’t make the compressor station be any nicer or be any quieter and change their position.”

The project would transport Marcellus and Utica shale gas from Pennsylvania – harvested through deep-well hydraulic fracturing – through a 24-inch pipeline. The pipeline would travel north connecting with the Tennessee Gas Pipeline in  Wales and National Fuel’s Empire Pipeline in Pendleton.

In Western New York, the pipeline would cut through the Allegany County towns of Genesee and Clarksville; the Cattaraugus County towns of Portville, Hinsdale, Ischua, Humphrey, Franklinville, Machias and Yorkshire; and the Erie County towns of Sardinia, Holland, Colden, Aurora, Wales, Marilla and Elma. The towns of Pendleton and Wheatfield in Niagara County would also be affected by the project.

National Fuel officials said nearly 80 percent of the project's cost would be in New York State.

The company estimates the project would contribute nearly $12 million in annual property tax revenues across four counties. A dozen school districts would benefit.

A construction workforce of nearly 1,680, many of them union workers from New York, would build the project for the Amherst company.

“The folks that are developing this are living in the exact same communities we’re talking about building this in,” Kraemer said. “These are the projects that drive the growth of a Western New York company.”

A pipeline through well country

Opponents say Western New York residents in rural areas who don’t even have access to natural gas and use propane instead would bear an unfair burden for National Fuel’s profit.

“I’m all about business and investment, but not when we have to do it at the expense of people’s health and the environment,” said Gary Gilman of the Pendleton Action Team, an organization aiming to stymie the project.

Strablow also cited the potential for accident or explosion, especially since much of the pipeline follows a right of way below high voltage electric lines. He fears adverse affects to humans and wildlife from chemical emissions and disruptions to nearly 200 waterways in the pipeline’s path.

“The whole thing is a mess in my view,” Strablow said. “We don’t need this gas. It’s all going for export.”

Cattaraugus Creek and its watershed would be one of the 192 streams crossed by the pipeline.

It is the only drinking water source for thousands in the area who tap wells. The area covers about 325 square miles.

“We’re all on wells out here,” said Lia Oprea, a Sardinia landowner and organizer of the Wyoming, Erie and Cattaraugus Communities Act on the Pipeline - a group resisting the pipeline.

Opponents hope to derail the project by pressing their water quality concerns during the upcoming DEC hearings.

Last April, the DEC declined to issue a water quality permit to the Constitution Pipeline - planned by another natural gas company - proposed to run through the Southern Tier counties of Broome, Chenango, Otsego, Delaware and Schoharie counties.

“If we’re going to start cleaning up the water, let’s not risk messing it up,” Oprea said.

Company officials said of the 192 crossings classified as streams by the DEC, only 60 are perennial waterways and only a dozen or so are considered high-grade streams that sustain trout and other aquatic life.

Kraemer said the issue of the sole-source aquifer was studied extensively, and the impact would be minimal.

The project would be constructed above the aquifer, and natural gas is lighter than air, he said.

“The question is a legitimate question, but you have to put it in perspective, too, with all the activities that occur in the same recharge area,” Kraemer said.

Those include things like general construction, sewer line installations, agricultural activities and highway maintenance, including the use of road salt.

Kraemer said construction of the pipeline across streams would be done under dry conditions, and only at specific times of year – Aug. 1 to Oct. 1 – to minimize any environmental impacts, he said.

Company officials estimate they can complete about 25 miles of the pipeline every five months.

With timely DEC approval, the pipeline could be done sometime next year, officials said.