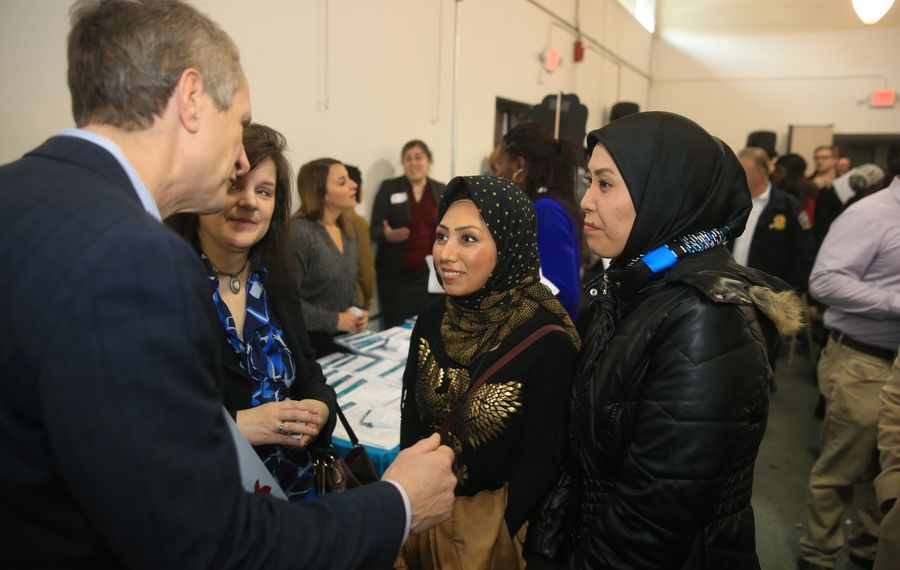 The organizers of Saturday's informational open house for immigrants and refugees started planning the event soon after Election Day. They knew the new administration would bring a different approach to immigration policy and they wanted to address any concerns members of the local community may have.

Little did they know the event would come one week after President Trump issued an executive order banning travel from seven predominantly Muslim countries. The controversial order has sowed anxiety internationally – and among Buffalo's immigrants and refugees.

More than 300 people came out on Saturday to ask questions of lawyers, law students, resettlement agencies, nonprofit groups, government employees and others who volunteered their time during the four-hour open house at Jericho Road Community Health Center on the West Side.

Will I be deported?

Can I travel to visit my family and still return to this country?

Will the relatives I left behind in my home country ever be able to join me in America?

Albanna came to this country as an immigrant from Yemen 48 years ago, he said,  to seek an education and a better life. Yemen is one of the seven countries subject to the president's executive order.

The group of organizers that put on Saturday's "Know Your Rights" open house included the City of Buffalo's Office of New Americans, the Erie County Bar Association Volunteer Lawyers Project and the International Institute of Buffalo.

About 30 lawyers and 25 law students answered questions about immigration, housing, family, health and other legal topics. Interpreters in 10 languages – including Burmese, Swahili, Somali and Farsi  – were available to translate for attendees. Turnout was far more than organizers expected, said Eva Hassett, executive director of the International Institute.

Organizers said they wanted to put people at ease, answer their questions as best they could and remind refugees and immigrants of their rights.

"It brought together people who are looking for help, and people who want to help," said Imam Yahye Y. Omar of the Buffalo Islamic Community Center, which serves many of the roughly 3,000 Somali refugees in Buffalo.

Omar said he's heard a lot of concern from his community since last weekend, when news of Trump's executive order came out. It banned entry into the United States for 90 days for citizens of seven countries: Iran, Iraq, Libya, Somalia, Sudan, Syria and Yemen. It also suspended the admission of Syrian refugees indefinitely and all other refugees for 120 days.

"They are very frightened. It's very scary for them," said Steven Sanyu, present of Burmese Community Services, which works with about 9,000 Burmese refugees in Buffalo.

Sophie I. Feal said one attendee, a naturalized U.S. citizen from one of the seven countries mentioned in the executive order, told her he was afraid he would be locked up in an internment camp, "like what was done to the Japanese."

"He's that afraid," said Feal, an immigration lawyer and member of the bar association's Volunteer Lawyers Project. "I had to reassure him that, as a United States citizen, none of this was applicable to him, none of the executive orders were applicable to him."

She said she also received questions about travel back to one of the nations on the ban list, particularly in cases where people aren't full citizens yet.

That's the dilemma in which Robabeh Ghorbanzadeh finds herself. She and her husband, Javid Jafari, and their three children, ages 10, 9 and 7, came to this country about 1½ years ago.

They are from Afghanistan, but they had a difficult journey to make it to this country as refugees, traveling first to Iran, and then to Turkey before making it to America.

Ghorbanzadeh's family, including her father, who has cancer, remains in Iran. She said in an interview Saturday that she wants to see her father, who is very sick, again but she doesn't have the necessary travel documents. If he were still in their native Afghanistan, it would be easier, because that country is not on the list of banned countries in the executive order. But Iran is on the order.

She said she would go to see her father, while leaving her husband to watch their children, but she is afraid she will get stuck in Iran.

"It's hard to decide," Ghorbanzadeh said through interpreter Yelda Natiq. "You have to choose your husband and kids or your family back home."

Dr. Sara Safarzadeh-Amiri, an internist and pediatrician with Jericho Road, is a Canadian citizen who was born in Iran and who did her medical residency at the University at Buffalo. She said, for now, she is not traveling to Canada to see her parents, who live in Ontario, because she's concerned about issues coming back over the border.

But she said that is a minor inconvenience compared to what she hears from her patients, such as Ghorbanzadeh, who come from around the world to Buffalo to make a better life.

"I imagine myself in her shoes," Safarzadeh-Amiri said. "This shouldn't be preventing her from seeing her father one last time. That's it. She's not a terrorist. She's not a threat. She already has status here. She's in the process of getting her green card."

Also Saturday, a collection of Democratic elected officials spoke from a stage in the room to offer their support to the refugees and immigrants.

McClatchy Newspapers contributed to this report.