Believe it or not, visitors to Niagara Falls used to be able to walk on the ice bridges that form naturally at the base of the cataracts.

The ice bridges form every winter, typically in January, when Lake Erie is frozen over. Winds push blocks of ice down the Niagara River and over the falls where they freeze into a large chunk.

In the 1800s and 1900s, ice bridges provided visitors with a unique view of the falls in the winter and were hugely popular. Vendors would even set up wooden shacks on the ice to sell souvenirs and food to tourists.

But ever since a tragic incident on Feb. 4, 1912, the ice bridges have been closed.

On Feb. 5, 1912, The Buffalo Evening News reported the tragic tale of three people who died when part of the ice bridge cracked and was swallowed up by the rapids.

The article describes the tragic scene:

The great ice jam in the gorge gave no warning of impending disintegrations. About 30 people were upon it, most of them huddled about the two shacks that had been erected in the center of the ice. Seven venturesome spirits wandered further down the floe. Suddenly, there was a loud cracking noise ... the ice broke and the party of seven found itself on a large cake of ice sailing rapidly down stream.

Hundreds of visitors to Niagara Falls watched what was happening but could do nothing to stop the tragedy. A rescue was attempted as a man hoisted a rope over the American side of the bridge. Burrell Hecock reached for the rope, grasped it and swung into the air as the crowds cheered. As he was being pulled up to safety, his strength gave out and he fell to his death. 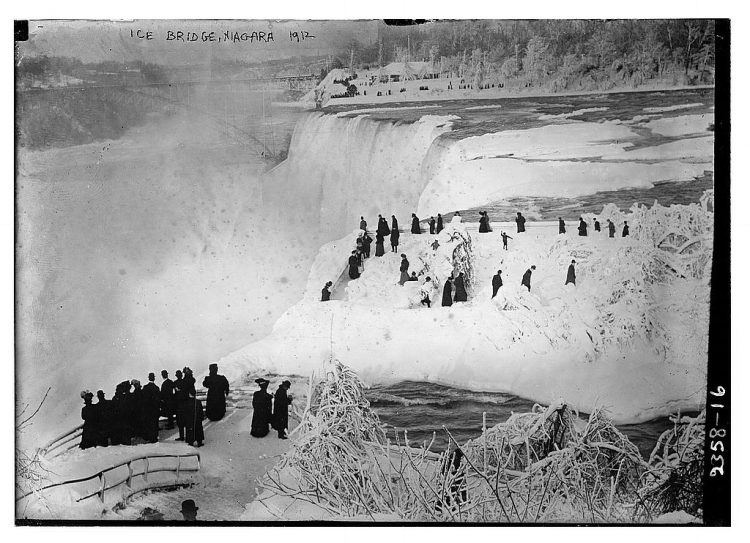 In 1912, an ice bridge also formed in between the American Falls and the Bridal Veil Falls on Luna Island so that visitors could walk across. Goat Island is in the foreground. (Photo courtesy of the Library of Congress)

The article describes the conclusion of the horrific scene:

Mr. and Mrs. Stanton went to their doom with a prayer on their lips. The man's courage was sublime. When he realized that all hope was gone he took off his coat, wrapped it about the woman, and together they knelt on the ice in an attitude of prayer, the man with his arms about the woman. They were kneeling thus when the first breaker of the rapids turned their frail ice raft over and they plunged into the icy current. Many a prayer went up from the silent groups on the shores in unison with that uttered by the dying couple and hundreds turned their faces away when the ice floe reached the breakers.

Their bodies were quickly swept into the whirlpool rapids.

The News said this was the first time in history that the ice bridge at Niagara Falls had broken. The day after the tragedy, more ice had formed to mend the bridge, but police posted signs forbidding people to walk out on it. That was the last time visitors would be allowed to walk on the ice below Niagara Falls.

You can read the full story from The Buffalo Evening News on Feb. 5. 1912: 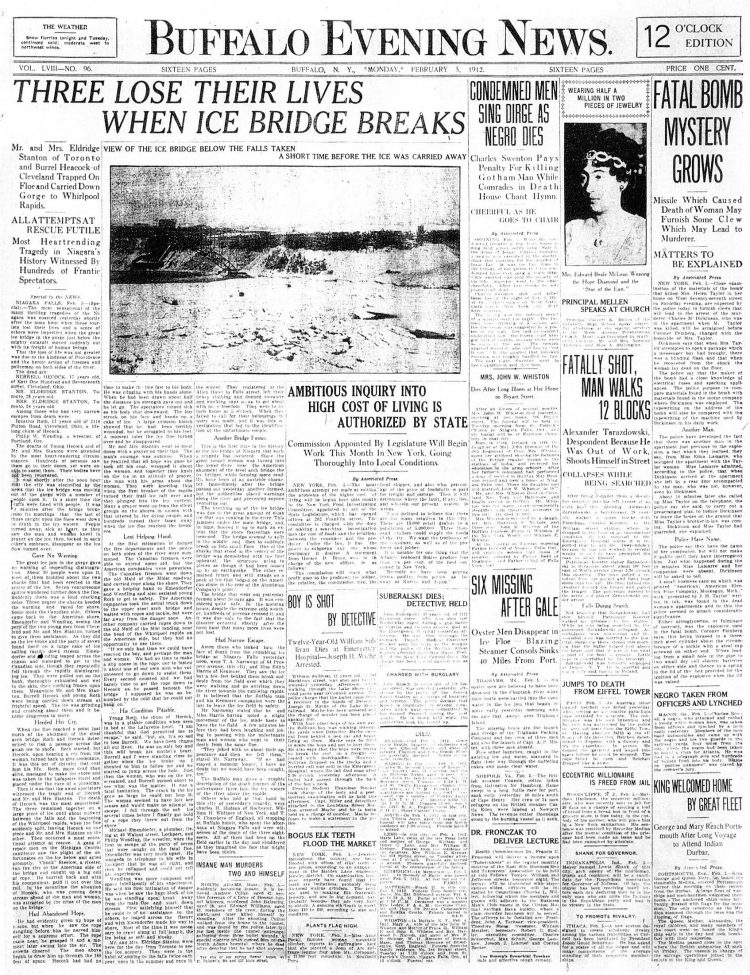