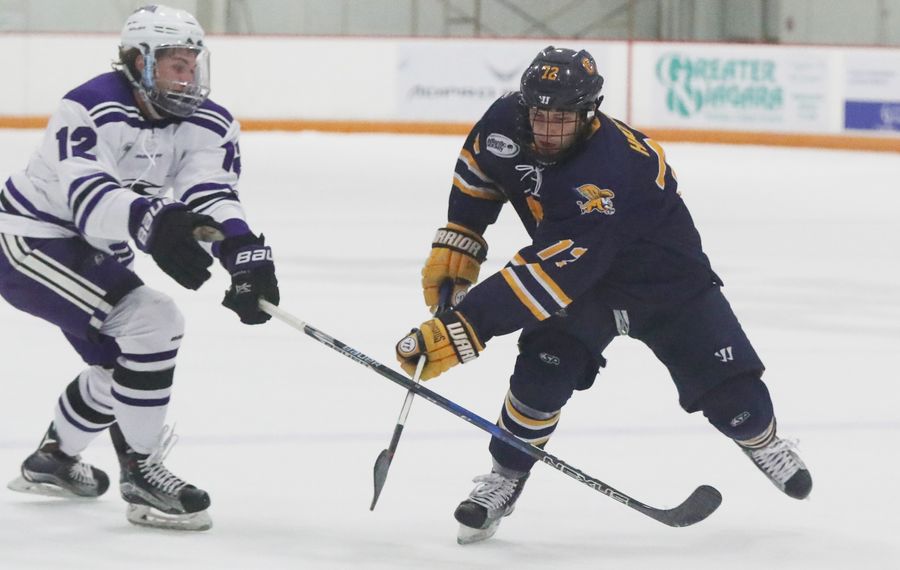 LEWISTON – Canisius fell behind in the first period then settled down and went on to a 5-2 victory over Niagara Tuesday night at Dwyer Arena, extending its undefeated streak to eight and its winning streak to six games. The Griffs are 7-0-1 during their unbeaten streak.

Canisius, however, scored the next four goals, two by junior forward David Parrottino. Dylan McLaughlin, this week’s Atlantic Hockey conference Player of the Week, had two assists in the victory.

Nick Hutchison scored on the power play two minutes into the opening period to get Canisius in front. Casey Jerry and Ian Edmondson assisted.

Niagara answered with goals by Spriggs at 5:56 and Rennaker at 7:34 for its only lead. It didn’t last very long.

Parrottino’s fourth of the season at 12:51 sent the teams to the first intermission knotted at 2-2.

The Canisius power play – the Griffs were 2 of 5 with the man advantage – struck again at 15:10 of the third as Cameron Heath scored his fourth with assists from Hutchison and Matt Hoover.

Then Parrottino tallied again with McLaughlin and Ryan Schmelzer getting the assists to make it 4-2. Jesse Pereira scored an empty net goal with 46 seconds left.

Canisius goalie Charles Williams made 23 saves to improve his record to 14-6-3. Jackson Teichroeb made 28 saves for Niagara.