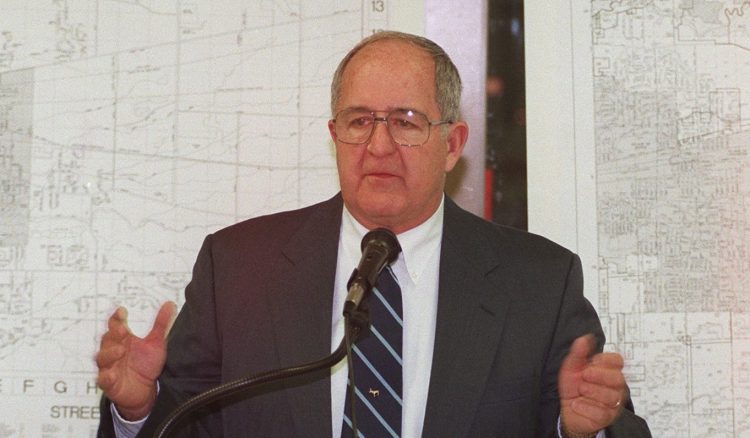 Robert H. Giza Sr. was a Town of Lancaster leader for decades, but the success of the former supervisor went beyond the town hall boardroom.

His devotion to children – as physical education instructor and Boys & Girls Club executive director – was legendary, said family and friends.

"He would take calls at 2 in the morning from club kids who were arrested, and he would pick them up and take them into our house," said Ronald G. Giza, his son.

Giza, a fixture in Lancaster politics who devoted his life to youth, died Tuesday in his Depew home surrounded by his family.

"He died of a broken heart, too, I think. They met in the eighth grade," said his son. "My mother had a liver transplant some 20 years ago and it was failing. He never left her side. He carried her when she could not walk. He was determined to drive her across the finish line."

He worked at St. Mary's Elementary School for 29 years as a physical education instructor, and started working in 1963 at the Depew-Lancaster Boys & Girls Club, where he stayed for 33 years.

"It's like he had three careers," said Ron Giza.

On Jan. 17, Mr. Giza made sure he cast his vote to retain the Village of Depew, recalled his son.

"It was a long line and he couldn't stand for long, so we snuck him in through the back door," said Ron Giza. "That's how important voting was to him."

"Bob was a real people person," said Coleman. "It didn't matter whether you were coming him to criticize or applaud, his door was always open."

On Jan. 23, Coleman said she visited Mr. Giza in the hospital, where he had been admitted overnight for tests.

"He suddenly broke into telling stories about the Boys Club," said Coleman. "We've heard them before, but we knew how much the Boys Club meant to Bob. They went back several decades. Bob enjoyed being young at heart."

Several projects in the Town of Lancaster marked Mr. Giza's tenure. Among them were: Lancaster Heritage Trail, a scenic 4-mile bike trail; the Senior Citizens Center and Youth Bureau buildings; and the Lancaster Meals on Wheels.

Many of the people whose lives Mr. Giza touched visited him at home during the two weeks before his death, said Ron Giza.

"There was constant parade of people who stopped by during the last two weeks to kiss him on the head," Ron Giza said. "When he worked at the Boys & Girls Club, he took dozens of kids camping to the Thousand Islands. The Thousand Islands was a magical place for many young people in Lancaster. He started taking them there in 1972 or '73."

The family had planned a surprise 80th birthday party for Mr. Giza in the Thousand Islands this August, Ron Giza said.

"We'll probably still do it," his son said.

A Mass of Christian Burial is scheduled at 10 a.m. Saturday, Feb. 4 at St. Mary's Church, One St. Mary Hill, Lancaster.