A $1.9 million state grant will provide a needed injection for a project to turn a 35-acre site on the East Side into a light industrial economic development hub that will be home to a workforce training center.

The grant from the state's Restore New York Communities Initiative program will be used toward a $75 million plan by the Buffalo Urban Development Corp. and the City of Buffalo to redevelop the Northland Corridor.

Officials said the grant money will enable the development corporation to reallocate other funds and resources to accomplish more work on the overall project as they prepare to start demolition in just over a month.

The first phase of the plan faces a tight timeframe. Officials hope to complete the $44 million Western New York Workforce Training Center as the project's anchor by summer 2018 so it can open for students that fall. But there are also multiple other buildings and vacant properties designated for redevelopment and reuse, as well as planned streetscape redesign and infrastructure improvements.

"That's what makes the Restore New York money so important," said BUDC President Peter Cammarata. "It allows us to do some of these other pieces that aren't related to the Workforce Training Center."

Specifically, $724,851 will be used for the rehabilitation of a 40,000-square-foot building at 537 East Delavan and $728,176 for updating a 15,000-square-foot former heat treating building at a site that BUDC officials are tentatively calling 612 Northland. Both are part of the former Houdaille Industries complex. The work on the century-old buildings includes some internal demolition, but mostly roof and window repairs, officials said.

"The grant will go a long way toward what we're trying to accomplish in this area of the city of Buffalo," Brown said. "With this money, it will free up some resources to be able to more fully engage the community in the project."

Brown said it's critical for the neighborhood to see the progress, especially once construction begins.

"When people see work being done, it makes what you announce even more real to them," Brown said. "They feel connected to the project. So this is very real to the public."

More than 150 people attended one of the first community meetings on the project Monday night to learn more about what will happen in their neighborhood and how they can benefit.

"So this is not only huge for the region, but for the Delavan-Grider area of the city," Brown said. 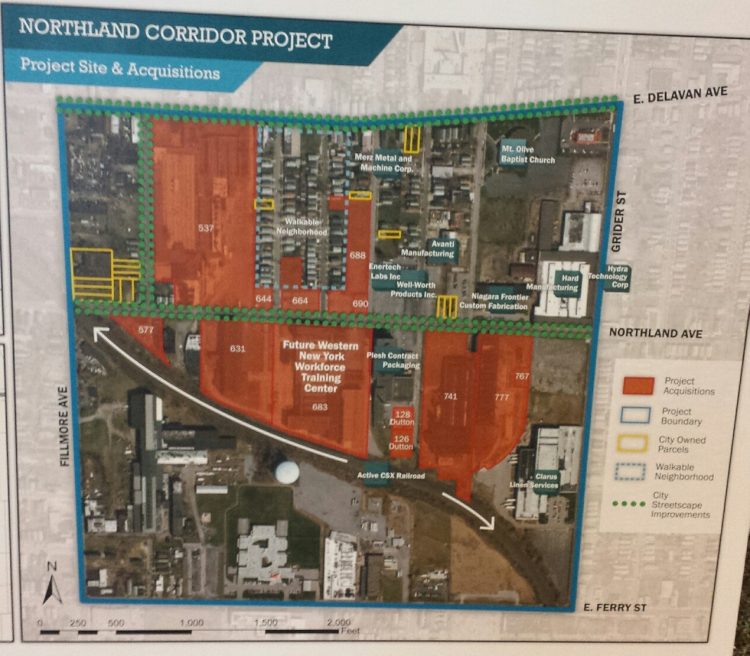 As part of the state's Buffalo Billion economic development initiative, BUDC acquired a dozen vacant or underused industrial properties, with 35 acres and 500,000 square feet of existing buildings. The agency plans to attract businesses to relocate and invest in new commercial and light manufacturing operations on the state.

The $75 million project will involve demolition and clearing of some properties that will become "shovel-ready" sites or public parks, as well as renovation of others for new occupants.

The flagship Workforce Training Center is slated to occupy 100,000 square feet of the 235,000-square-foot complex at 683 Northland, with the rest of the building renovated for other tenants or various retail and community services. Buffalo Manufacturing Works, for one, has already expressed interest in relocating to Northland, officials said.

The training facility, which will be run by a consortium of four local nonprofits, will be funded by $29 million from the Buffalo Billion, $15 million from the New York Power Authority and $4 million from the city. Three schools from the State University of New York system will handle the teaching. Officials are also pursuing at least $10 million in state and federal historic tax credits, as well as tax credits from participating in the state Brownfield Cleanup Program. 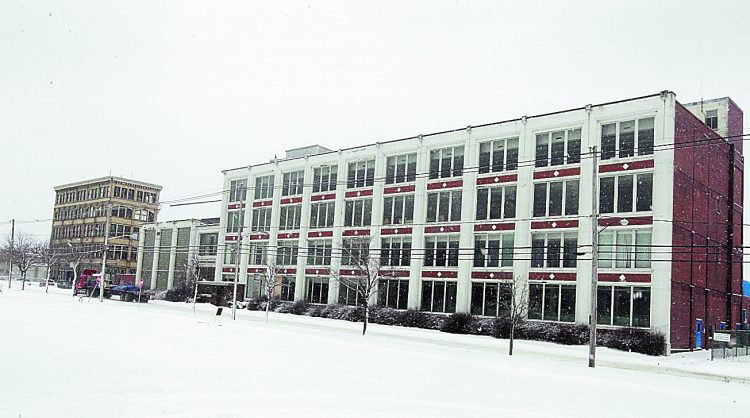 BUDC officials also expect to seek other services at Northland to serve the needs of students, tenants and the community. Those could include a cafeteria or other food business, a daycare center, an ATM and a community meeting space, as well as recreation space and several "pocket parks," including a triangular lot where the railroad tracks cross Northland. The city is also looking at supporting infill housing, home repairs and community development, Brown said.

"We have a significant opportunity here, and we're going to bring in as much resources as we possibly can," Brown said. "We want to maximize the state dollars that are coming in."

Design work for the training center is already underway, and the first demolition work will begin in early March with the 185,000-square-foot Houdaille building at 537 East Delavan. Regional Environmental Demolition has been selected as the demolition contractor, while Gilbane Building Co. leads the team as construction manager.

That will be followed in early summer by the advance work at 683 Northland, which will house the 100,000-square-foot training center. Those tasks include interior demolition and remediation. The city will begin reconstructing Northland Avenue in mid-summer. That project, slated to cost between $3.5 million to $4.5 million, will go out for bid in April.

"It is an ambitious schedule," said BUDC Vice President David Stebbins. "We want the facility substantially completed by July 2018 and open for education by fall 2018. So this year, there's going to be a tremendous amount of activity going on in the Northland Corridor, with several projects underway at the same time."