Italian-Americans can claim a litany of proud athletic moments from its ethnic brethren, from New York Yankee Joe DiMaggio to champion boxer Rocky Marciano, to Danny Zuko unexpectedly notching a varsity letter for track in the 1978 film, “Grease.”

Have these legends and their impressive feats provided motivation for a widespread fleet of Italian-inspired sports bars across the country? No — but that hasn’t stopped Buffalo’s Bada Bing from weaving its ethnic vibe into one of downtown’s finest game stops.

Named after Italian slang for "the unexplainable" — as well as one of Tony Soprano’s exotic business holdings on the award-winning HBO drama “The Sopranos” — the former Bradford and Omega Lounge is now one of the shiniest spots along the still-transforming Chippewa Street entertainment district. Once known as a stretch to toggle between shots of Canadian whiskey and inebriated street brawls, the blocks between Main Street and Delaware Avenue now boast more dining establishments than straight-up liquor slings, convenient for downtown employees, visiting hotel guests or those heading to a touring Broadway production at Shea’s.

In the middle of it all is the sleek Bada Bing, catering to sports fans that need to be surrounded by baskets of tater tots and buckets of beer while inundated with high-definition picture and sound. 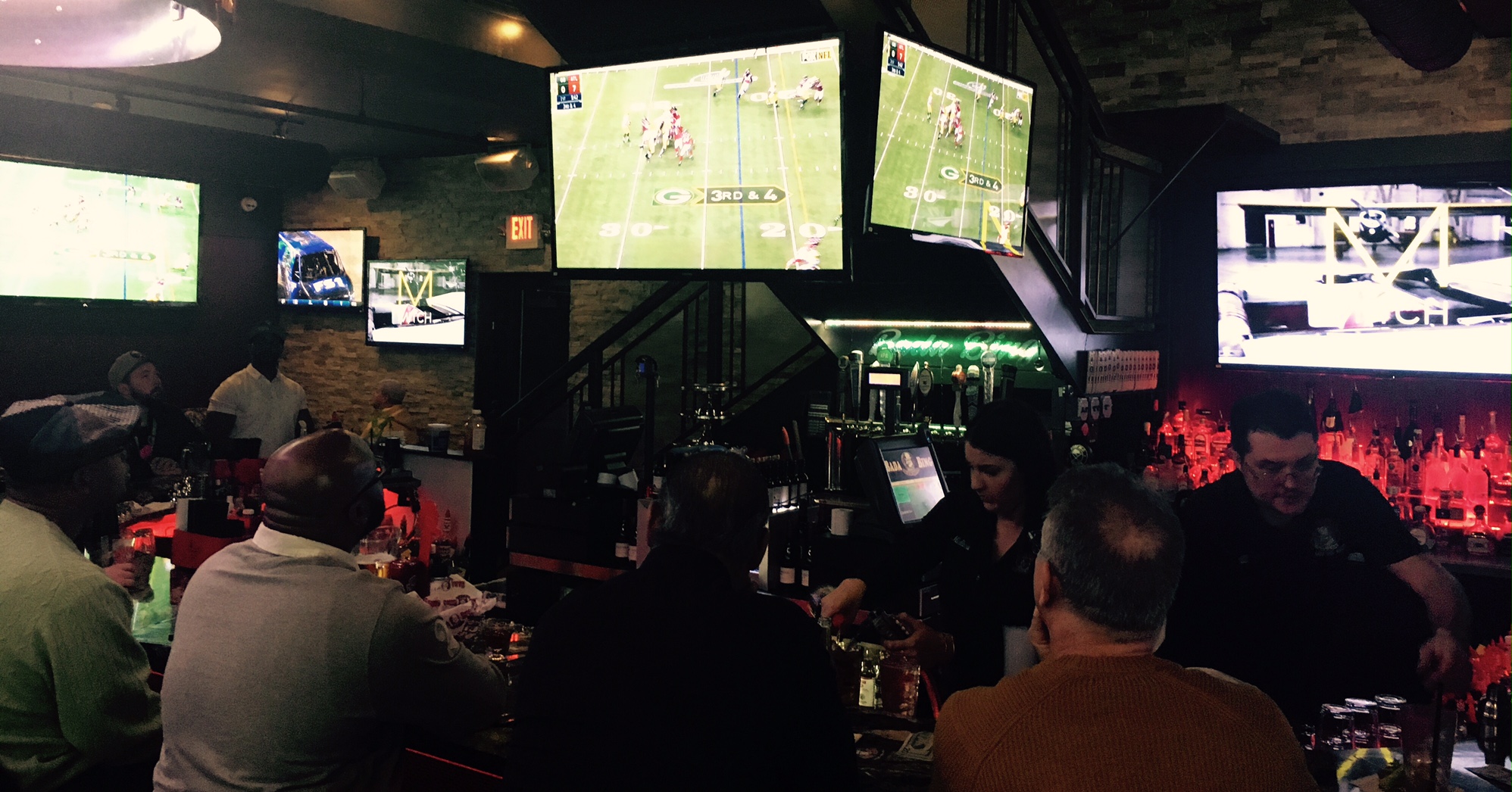 I stopped by the bar to catch some of the NFC Championship between the Atlanta Falcons and Green Bay Packers. While downtown’s streets were rain-drenched and mostly barren of Sunday foot traffic, Bada Bing was packed with tables and barstools full, as well as a private party sectioned off on the right side of the bar. Whether drinking discount Bloody Marys ($1 off) or buckets of Labatt Blue, everyone was seemingly there to do one thing: watch football.

Large HDTVs are hung in every corner of the bar’s first floor, giving patrons a new vantage point with every wandering glance. Live commentary replaces the bar’s typical dance or alt-rock during game times, allowing for maximum immersion for those intent on treating Bing barstools like their in-home Barcaloungers.

And with the Super Bowl coming on Feb. 5, this is good information to have.

Would you rather spend the game at a party — elbow-deep in a bowl of Cool Ranch Doritos while anonymous guests eschew game action for discussion about their favorite commercials or halftime’s Puppy Bowl — or would you rather saddle up with some like-minded patrons for a focused night of beers, food and football inside a downtown locale that specializes in mastering such occasions?

Buffalo's Bing awaits as a destination. And as the families of DiMaggio, Marciano or Zuko would say, “godere.”

Why: To comfortably enjoy NFL action in the heart of the Chip Strip.

Parking: Available in lots and garages off Chippewa, Pearl and Franklin streets.

Roll the dice with: Peroni, in respect for the Italians in the house.

Are 18 enough?: The bar boasts 18 TVs across the walls of its first floor with more on its second floor.

Drink specials: Different every night, with highlights including two-for-one domestic bottles and well drinks, Monday through Friday (4 to 7 p.m.); and a special Sunday menu full of creative Bloody Marys, Bellinis and Mimosas.

Take the train: For those with access, the bar is a short walk from the Fountain Plaza Metrorail stop.

And if you hate sports: Turn away from the fleet of screens, grab a drink and fuggedaboutit.