Cyber security, app design, computer animation, data analysis and operating a 3-D printers are just some of the skills student in the Kenmore-Town of Tonawanda schools are learning in their high school computer science and engineering courses.

Ken-Ton, with two high schools and more than 7,100 students, since 2008 has put over a million dollars into implementing its "Project Lead the Way" program. That includes hardware, teacher training and classroom modifications at its two high schools and two middle schools.

"Project Lead the Way is an internationally recognized pre-engineering program. When you become part of the project you get their curriculum and their training. In New York our affiliate university is Rochester Institute of Technology. All of our teachers for Project Lead the Way courses have to go to RIT for training," said Joel Maerten, career and technical education coordinator. He teaches the computer science and engineering course at Kenmore-West High School.

The district also is given assistance on deciding what equipment and technology to buy.

"It would be very difficult to develop a curriculum like this on our own, said Maerten.

This is the second year the district has offered its Project Lead the Way computer science and engineering course. Kenmore-Tonawanda is one of the first districts in Western New York to offer the course, which aligns with the College Board's new Advanced Placement Computer Science Principles framework.

"When we first started this we had no idea. None of us had any experience" said Ken-East Senior Steven Ogilvie of an animation program he and fellow classmates were learning. "I am hoping to go to U.B. to study engineering. My other classes I am working on (computer) coding."

"My parents can't believe we have such a wide variety of technology courses here," said Eric Boyle, a sophomore at Ken-East.

"I've had a few parents who say, 'I wish we had this when I was in school,'" said Robert Uldrich, who teaches the course at Kenmore-East.

Maerten said there's been a lot of change in the technology offerings from even a few years ago.

"We put a lot of money into updating these classrooms, from the curriculum, to the technology the students use. We have our traditional tech courses, but we went a step further," said Maerten. "We are one of the first districts to get this course certified with New York as a career and technical education program. Students can get an extra diploma with a New York State endorsement, a seal on it, saying they have completed a rigorous study in pre-engineering."

Uldrich said the course starts at a ground level so that all students can successfully be engaged, but students with greater motivation, ability or background will be challenged to work further. 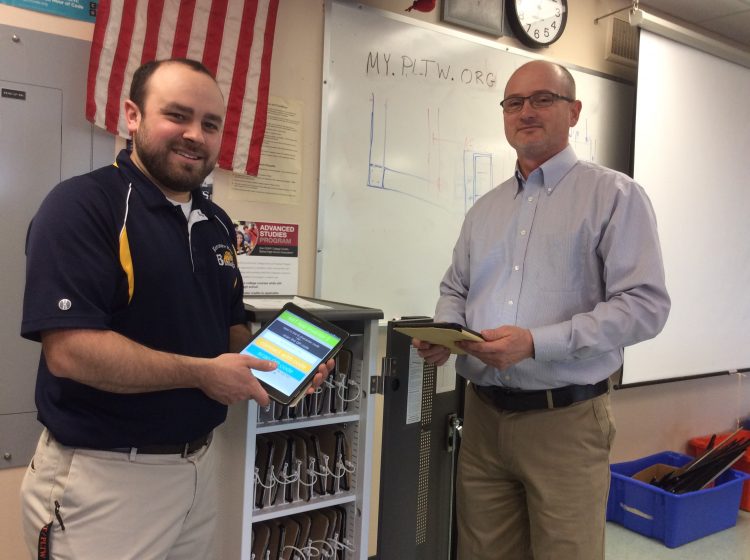 "The district has in place a comprehensive sixth through 12th-grade technology and engineering education program," said Maerten. "A huge number of these kids are going to go into careers that either are directly involved in computer science or at least it will be part or their jobs. It touches every profession. Computer science is more than just websites and phone apps."

"The best feedback we get is from students. They go to U.B. with the top students in Western New York, who are well-prepared academically, however our students are able to step right in with the engineering components of the program, whether it's computer-aided drafting or designing and building a prototype. Students who didn't have this opportunity in high school are playing catch up," said Maerten.

Planning to implement Project Lead the Way began in 2009.

"We started just before the budget crisis began and a lot of the money was spent on classroom modifications and big equipment. Luckily we got started and the district was able to sustain the program," said Maerten. "But right away the district saw the benefits of what was going on and said they were committed to keeping it going."