Here's what a check of sidewalks on Hertel to Main to Fillmore to Best found this morning: It couldn't have been an easy walk, given all the sidewalks that, as of 8:45 a.m., weren't cleared.

Lots of private homes and businesses, including some across from schools, hadn't cleared their walks.

Ditto for some private properties that people walk past to get to bus stops and Metro stations.

Here's one example, from Hertel Avenue. 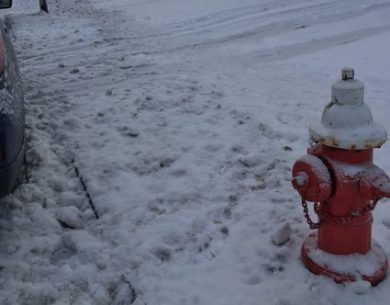 I found similar conditions on Main and Best, and to a lesser extent Fillmore, particularly with private properties.

Sidewalks on city-owned properties generally seemed OK, and sidewalks in front of schools were cleared off, on the streets I drove down.

I got a political survey call over the weekend from a research firm asking about the upcoming mayor's race.

Here are the questions asked:

I asked the pollster if they were working for one of the individuals mentioned in the survey. She said the poll was being done by Kalamata Research and that she didn't know who had commissioned the poll.

In today's Buffalo News and at BuffaloNews.com, I have a story on Buffalo's immigration status: Buffalo is a resettlement city, not sanctuary city, Mayor Brown says.