In the days and weeks after the Blizzard of ’77 struck Buffalo, full-color images filled Time Magazine and nightly network newscasts, showing Buffalonians continuing to smile and continuing to dig out.

It’s probably our smiles and the sense of resiliency that came through in the news coverage that made Buffalo an acceptable butt of jokes during a deadly natural disaster.

Johnny Carson’s first joke about the Blizzard might have been his version of the “we could have told you Buffalo was a disaster area before President Carter’s declaration” joke, but they didn’t stop there.

The iconic host of NBC’s Tonight Show from 1962 to 1992 lost a few fans in Western New York when the Buffalo jokes continued through the clean-up and into July, and seemed come up often for a quick laugh. A North Tonawanda man wrote a letter to the editor tired of Carson’s “low-intelligence snide remarks.” 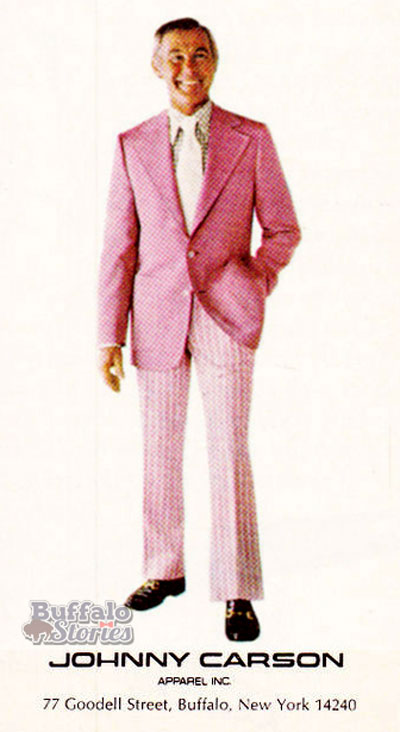 In national trade ads as well as the labels inside every suit made by M. Wile for his personal line of menswear, Johnny Carson’s name was printed right next to Buffalo. (Buffalo Stories archives)

"Nobody wants to live there,” Carson said. “Not even O.J. Simpson," who was America’s highest-profile “Buffalonian” and had been through a contemptuous contract dispute with the Bills before the season that had just ended.

Johnny’s pals got in on the act, too. In one Tonight Show appearance while the clean-up still continued, Don Rickles referred to Buffalonians as “all those blue people” to a chorus of laughter in Carson’s Burbank studio.

After a year of the jokes, Buffalo’s new mayor had just had enough. In his first weeks as Buffalo’s chief executive. James D. Griffin sent Carson a letter.

"You have a golden opportunity to make it a great '78 by spending a minute or so each night ... extolling some of the virtues of Buffalo," Griffin wrote, going on to list many of Buffalo’s best attributes, but saving the one for which Carson might have a soft spot as last.

"Most assuredly, Johnny, I invite you to share our pride in the fact that the M. Wile Company in Buffalo is the sole manufacturer of that famous clothing known as the Johnny Carson line. And that's a line I'll hang my coat on ... because after all, that makes us Number 1 -doesn't it?” 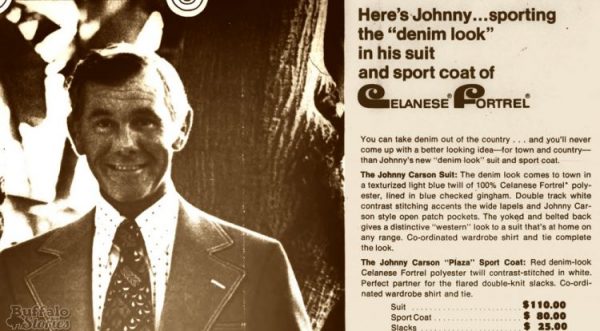 In 1980, when there was no snow for Buffalo’s winter carnival, tourism officials sent Carson a telegram asking if he might be able to help find some.

During the particularly warm and snowless winter of 1983, Buffalo had green grass while much of the East Coast dealt with a barrage of snow and cold.