Imagine experiencing music and other sounds – even a loved one’s voice – for the first time.

That’s what happens for 16-year-old Isa Habeeb and other students in a music class at St. Mary’s School for the Deaf when they try a device called Supbac.

Some of the students have partial hearing while others, like Isa, are completely deaf. The technology allows them to physically feel music and sound in a way that they hadn’t before – through their bodies.

It was really "loud and vibrating a lot," said 12-year-old Julia Bronneberg, speaking through a sign language interpreter to describe her first time using the equipment.

Subpac works like stereo amplifiers or subwoofers by transferring low frequencies directly to the body to provide a physical dimension to the musical experience. The audio system comes in two forms: a backpack that allows the wearer to move around, and a seatback cushion. They cost $350 each, said St. Mary’s music teacher Joyce Trautman.

"It was really interesting. You can put it on a chair, lean back and feel vibrations in the back," Trautman said. 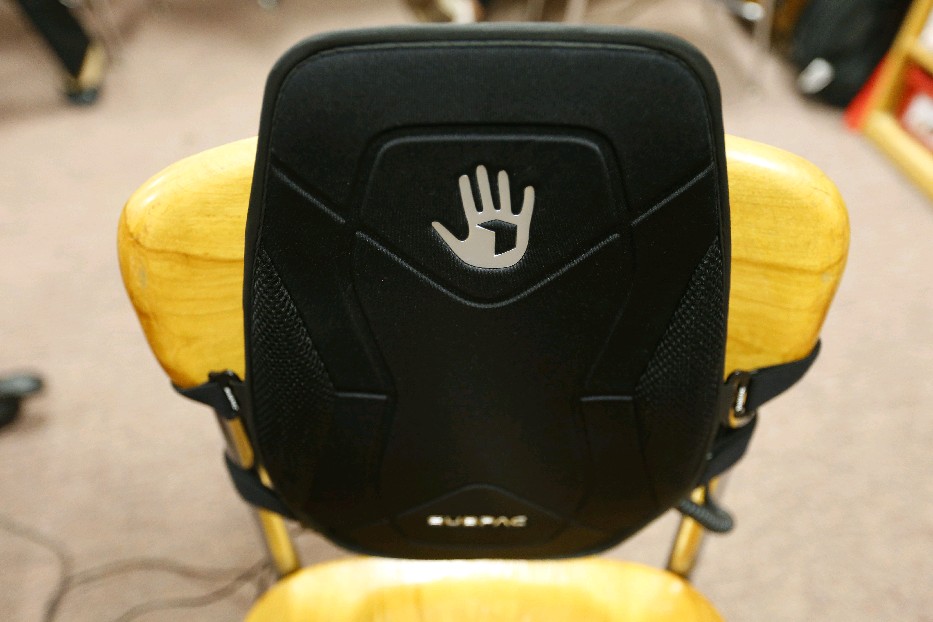 One version of the Subpac attaches to seat backs to transmit vibrations that help the deaf 'experience' music. (Mark Mulville/Buffalo News)

Her class was introduced to the devices through Isa’s deejay uncle, James D’Agostino, who is known professionally as DJ Green Lantern. D’Agostino and his group use the Subpac on stage to feel the bass as they perform. When he tried it for the first time, he immediately thought of his nephew.

Subpac’s manufacturers donated five of the ones that attach to chairs to Trautman’s music class and also gave Isa – the grandnephew of Buffalo School Board Member Sharon Belton-Cottman – his own backpack.

"It helps the deaf relate the feeling of vibrations because with the sound you can’t hear it as much ... so you don’t feel any kind of ties to the music," said Isa, who was born deaf. "With the vibrations, you feel ties to the music."

Belton-Cottman said she has even looked into the possibility of a musical collaborative between the district’s Academy for Visual and Performing Arts and St. Mary’s, which educates students in pre-school through high school who were born deaf or lost their hearing.

During a recent class, Trautman played a music video by professional rapper Sean Forbes, who is deaf. Students love his music, which has a lot of bass and low frequency sounds, Trautman said. Forbes, who hosts summer workshops for kids, performed at St. Mary’s a few years ago. In the video, he uses sign language to convey the lyrics, which appear on the screen.

Students using Subpac don’t experience music the same way that hearing people do, "but it’s much better than not hearing," Trautman said. Some of her students mouth the words to Forbes’ video, while Julia rocks back and forth in her chair to the beat.

So did 12-year-old Alicia Rivera, who called it "really loud."

"It feels interesting when you first try it and it vibrates into your body," said 13-year-old Jonathan Allen. "It’s weird because you can feel the music and I’ve never actually been able to feel my music before."

Jonathan has some hearing and said Subpac is not much different than his hearing aid.

"It was not new to me because my hearing aid vibrates in my head," he said, adding that Subpac provided an expanded experience. "Now it’s in my back, and it hurts a little bit when the music is loud, but it’s very enjoyable."

Subpac is not primarily for deaf folks, D’Agostino said. For instance, the vibrating vests were worn by patrons during "Rhapsody," an experimental theater production that ran last November in Buffalo’s Torn Space Theater.

"It’s primarily used as a tool to help normal hearing people to be able to feel the bass along with hearing music," said D’Agostino, an Arizona-based musician who has toured with Jay Z and Eminem and produced for them, as well as for Busta Rhymes and Ludacdris.

It was last June in Los Angeles while getting ready to tour with Grammy-nominated rapper and producer Nas that D’Agostino first heard about and tried the device. A Subpac representative who knew one of the members in the group stopped by the rehearsal with the backpack in tow.

"He wanted to outfit all of us with Subpacs," D’Agostino said. "He’s telling me about this and telling me all these things we could do, and then he said, ‘We’re also working with deaf schools.’

"It clicked," D’Agostino said. "My nephew popped in my head."

The representative and D’Agostino flew into Buffalo last October, made a presentation at St. Mary’s and gave the school several Subpacs.

But before they visited the school, Isa had the opportunity to test his own backpack with his family. He cried when he "heard" his father’s voice for the first time, Belton-Cottman said.

"It was tremendous for us," said his grandmother, Donna Habeeb. "He got to feel our voices."

Isa also was impressed with his uncle.

"It was the first time I could experience his music ... so I really liked it and it really shocked me. I thought it was really cool," Isa said.

There are various ways Trautman teaches music to her students. A lot of what they learn in music class is connected with learning language and having fun. Sometimes she uses drums with them when working on rhythm and beat, so they can feel vibrations. The class also interprets song lyrics.

"We express ourselves with signs, and part of it is to translate the English into American Sign Language because it’s different. Sometimes songs are very symbolic, so you want to sign the meaning of it. But then sometimes, they’re not literal," Trautman said of the challenge of signing in a way that captures not just the words but the meaning and feeling in music. "That’s a big part of it, deciding how you’re going to sign a song."

Trautman says she hasn’t had much of a chance to use the Subpacs with the music class yet because she was busy preparing the students for holiday concerts and because they only recently received the devices. But she occasionally puts them to use.

"Usually at the end of class as sort of a reward they can listen to different songs. Sometimes we listen first and then use the Subpacs for the different experience of feeling the music," Trautman said, adding that Subpacs will come in handy when teaching tempo and cadence.

"You can really feel the beat and the rhythm (with the Subpacs). So that’s one really important thing when you’re trying to teach that, especially to younger kids. They can’t hear it. Now sometimes they can watch, like if you’re hitting on a drum or ringing a bell. But to be able to feel it and see it and then maybe hear it a little bit – it integrates everything," she said.

"We’ll be using them more," Trautman added. "And we’ll try to find more ways to use them."