Linda Muscato grieves every day for her husband, Joe, the love of her life. He was killed in an arson at the old Rosa’s furniture store in the Town of Tonawanda on April 3, 2001.

But if police ever arrest the person who started the fire, Muscato has no interest in seeing that person go to prison.

“I know some people will criticize me for saying that, but I don’t think the person who started this fire wanted to hurt Joe or anyone else,” she said. “I think that person is already in a sort of prison…already suffering every single day, knowing the pain he caused. But I would like to know why he did this, how it happened and why my husband was the only person in that building who didn’t get out. I can’t tell you how many hours I’ve gone over all these questions in my own head…over and over again.”

Joseph Muscato Jr. was the store manager, and he died in the intense, smoky fire in the store at Sheridan Drive and Eggert Road. Muscato died just 15 feet short of a store exit after trying to fight the fire and making sure that about 24 other people – employees and customers – got out safely, authorities said.

Blinded and choking from the smoke, Muscato apparently ran smack into one of the store’s support pillars, suffering a big gash in his head and falling to the floor, dazed and disoriented. That’s where volunteer firefighters found him.

Muscato, 48, was a “hero” who put the safety of others above his own, said Erie County District Attorney John J. Flynn Jr., who lives a short distance from the fire scene.

“The last words that anyone heard from Joe Muscato were, ‘Are people out of the building?’” said Thomas H. Burton, an attorney for the Muscato family. “One of the Rosa’s salesmen heard Joe say those words as the salesman was escaping from the fire. He thought Joe was right behind him, but Joe never made it outside.”

Town of Tonawanda police and federal agents have had a suspect in their sights for the past 15 years, a disgruntled former employee of Rosa’s. But no one has been arrested for starting the fire.

“It’s true that, in the opinion of our investigators, there is a person who was in the store that day who may have been responsible for the crime,” Capt. Joseph F. Carosi said. “The evidence we had was circumstantial. The individual was not cooperative. Our people spoke at great length with an assistant DA, but we never came up with enough physical evidence or other evidence to put the case before a grand jury.”

Linda Muscato knows the name of the individual who is under suspicion. That person was a close work friend of her husband’s who was going through some personal difficulties at the time of the fire, she said.

“If this person was the person who started the fire, I know he has to be really suffering because of it,” she said.

She also has been suffering.

Muscato, 57, spent years in counseling, trying to come to grips with the loss of her husband. She said the love of friends and family members, including her two sisters, her three grown children and her two young grandchildren have helped her cope with the tragedy.

She lives in the City of Tonawanda, a 10-minute drive from where her husband died.

The loss hits her hardest when she looks at her grandchildren – two kids her husband never got to meet.

“When I look at these kids, I can’t stop thinking about what a wonderful grandfather Joe would have been,” Muscato said in an interview. “They would have had him wrapped around their little fingers.” 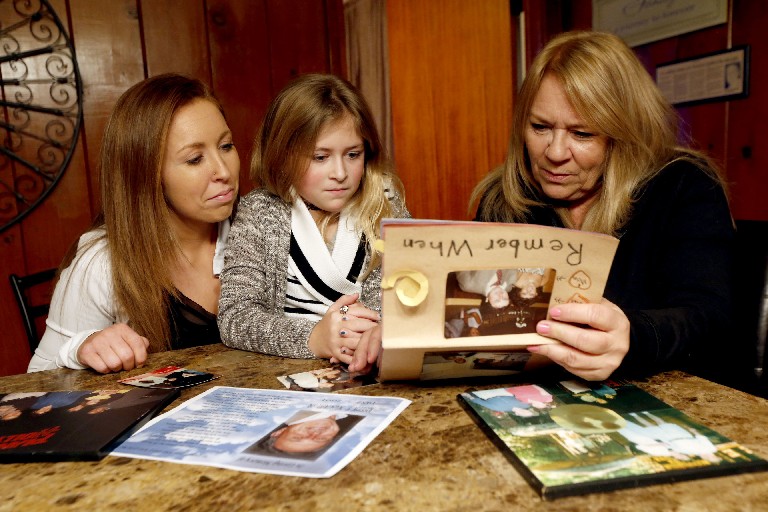 Linda Muscato looks at Disney World family vacation pictures with daughter Nikki and granddaughter Mia, 8. Her husband, Joe, was killed in a 2001 arson and never got to see Mia or their other grandchild. (Robert Kirkham/Buffalo News)

She has many fond memories of her husband of 21 years, starting with the day in 1977 when she fell in love with him at first sight during a job interview at a duty-free store.

“When I met him, he was sitting with his feet up, reading The Buffalo News,” she said. “He had a sarcastic sense of humor, but I could see he was really a nice guy. Honest to God, it was just a 15-minute interview. But when I walked out of his office, I said to myself, ‘I’m gonna marry that guy.’”

She got the job. They started dating a few months later, and they married in August 1979.

Joe Muscato, a native of Buffalo’s West Side, was a funny, sociable, laid-back guy who was always there for his wife and kids, she said.

On the last day of his life, it was almost as though Muscato had a premonition that something bad was going to happen.

“When he left for work that morning, he was very nervous and uneasy,” Linda Muscato recalled. “Joe went out to his car, then he came rushing back inside and said, ‘I forgot to kiss you goodbye,’ and he gave me a kiss. He made sure to tell our son that he loved him that morning. Then, he dropped one of our daughters off at school on the way to work. Joe walked her up to the door of the school and gave her a kiss.”

Around 4:10 that afternoon, Linda Muscato called her husband’s work number to check about dinner plans. No one answered the phone, which was highly unusual. Minutes later, she got a call from one of her sisters, Cindy Puma.

“I don’t think it’s anything to worry about, but there are little puffs of smoke coming from Rosa’s,” Puma told her.

Linda Muscato immediately sensed that it was something to worry about. She put her kids in her car and headed for the store. Smoke was pouring out of the building as she arrived.

“As soon as we drove around the corner and I saw the store, I had this wave of emotion come over me. I felt at that moment, Joe was gone. Somehow, I just knew,” Muscato said. “I felt like I was having a heart attack. My husband’s brother and one of the fire chiefs put me into an ambulance…A few minutes later, they told me Joe was gone.”

The fire was one of the biggest in recent decades in the Town of Tonawanda, causing an estimated $2 million damage. Volunteer fire companies and Tonawanda police and emergency personnel were assisted by the Buffalo Fire Department and agents from the U.S. Bureau of Alcohol, Tobacco, Firearms & Explosives. Several days after the fire, investigators officially called it an arson. Someone – for reasons unknown – set it intentionally.

In a wrongful death and negligence lawsuit filed seven months after the tragedy, Burton alleged that the Rosa’s showroom lacked many fire safety features that should have been required by law, including a sufficient number of working fire extinguishers and – most importantly – a sprinkler alarm system. The defendants included Rosa’s and several businesses that had been hired by Rosa’s to renovate the building.

Insurance carriers for the defendants agreed to pay a settlement to the Muscato family. Muscato said she is thankful for the settlement, but no amount of money will bring back her husband. She works for a local not-for-profit agency.

After the fire, Paul F. Rosa issued a $10,000 reward for information leading to the conviction of the arsonist. He told The News in April 2001 that he considered Muscato a dedicated and loyal employee who was “like a member of my family.”

Town police said they don’t know, and Frank G. Montemalo, who represented Rosa’s in connection with the wrongful death lawsuit, declined to comment.

The News could not reach Rosa.

Although the investigation has been dormant for a couple of years, Carosi said Tonawanda police still would like to solve the case. He asked that anyone with information of any kind about the fire contact the town police TIP line at  879-6606.

Linda Muscato said one investigator told her that police have a theory that the person who started the fire did it to create a “diversion” that would enable him to steal money from a cash register in the store.

“That never made much sense to me, because at that store, most people paid for furniture by credit card, not cash,” Muscato said.

Regardless of the reason, starting a fire with people nearby was a reckless and dangerous act, Burton said.

The fire started in a display of bedroom furniture for children, authorities said.

“Why did this happen? How did this happen? That’s what I want to know,” Muscato said. “Even if the person who did this sent me an anonymous letter, explaining what happened. At least that would be something.”

Although her husband died nearly 16 years ago, she said there are still moments when she forgets. She hears some news about one of their kids, or one of her grandchildren does something cute, and Muscato thinks, “I can’t wait to tell Joe about this.”

And then, an instant later, she remembers he is gone.