Gregory Sanchez learned about war at an early age, long before he enlisted to help rid the world of Adolf Hitler in World War II.

He was 4 years old when he traveled to Spain with his father, who left behind his wife and younger son in Youngstown, Ohio.

At the time, Sanchez said he did not know why he was going with his father but as time passed, he realized the purpose of the trip.

“My father was sick and he died there. He must have wanted to see his mother and sisters and brothers one more time. I stayed there for eight years living with aunts and uncles,” Sanchez said.

The Spanish Civil War started in 1936 while Sanchez lived on a relative’s farm in a section of the country that supported Francisco Franco, who ultimately succeeded in becoming the country’s dictator.

“We lived in the province of Avila and my relatives were not pro-Franco. Some of them went to jail and I had to take food to them every day.”

But his most startling memory of that war involved going outside one morning to gather the family’s dozen dairy cows from a nearby pasture for milking.

“When I was walking down the road, I saw this pile that was in a pyramid and I thought it was a bunch of trees. When I got closer to it, I started screaming. It was a pile of dead soldiers. They had been piled in the middle of the road from a battle. I think they were anti-Franco soldiers. I ran home and forgot about the cows.”

His time in Spain also provided him with firsthand knowledge of farming in the days before powered machinery eased the burden on farmers.

“We would milk the cows by hand and then a couple cousins and I would get a big wheelbarrow and deliver the milk in canisters door to door in our village. We had measuring devices to pour it out into quarts and pints. Work came first, then we went to school.” 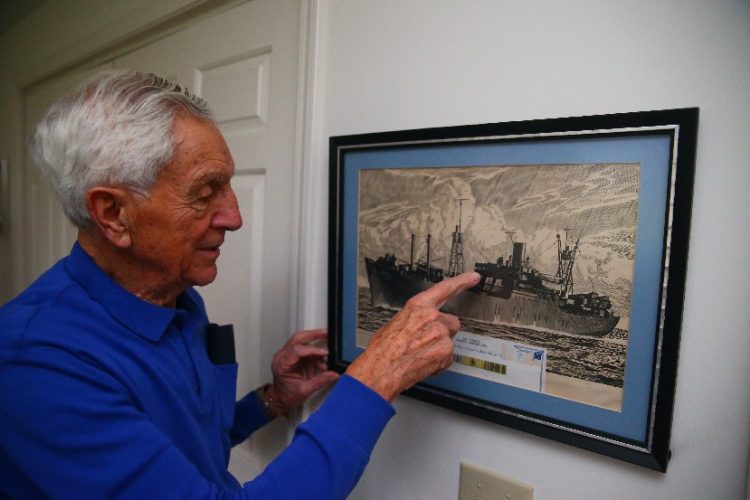 Sanchez returned home in 1938, a year before the civil war concluded. He was 12.

“My mother sent for me and I traveled on a ship by myself to New York and was put on a train to Youngstown, Ohio. My mother had remarried and she met me at the train station and I had no idea who she was. I had to relearn English,” he said of the challenging transition.

“I had my mother sign papers to let me enlist early. She signed them the day I turned 17,” he said.

Knowing how brutal dictators could be since he was familiar with Franco’s actions, Sanchez said that knowledge provided him with motivation in wanting to fight Hitler.

After practicing night amphibious landings with Marines at Camp Lejeune, N.C., he and other Coast Guard members were soon assigned to the USS Cepheus and bound for the European Theater.

“We went to England first. Then we had a lot of ports of call picking up supplies for the soldiers who had invaded Italy and delivering them. Then we participated in the invasion of southern France.”

Under enemy fire, he and his crewmates transported troops, ammunition, trucks, gasoline “and whatever else was needed onto the beaches from small landing crafts.”

Sanchez described himself as “fortunate enough not to get hit” from the German shelling.

The Cepheus later sailed to England and to Norfolk, Va., to be refurbished.

“We got leave for a few days and then we headed to the Pacific. Hawaii was our first stop.”

There, he took in the devastation at Pearl Harbor from the Japanese attack that had brought America into the war.

Again, the Cepheus crew geared up for battle, visiting various ports before participating in the invasion of Okinawa.

“We did the same thing there that we did in France, transporting troops and all their equipment ashore,” he said. “The Japanese were waiting for us and shooting.”

Spared injury once again, he downplayed his good fortune.

“You have to realize that I was on one of maybe a thousand ships. I’ll tell you what, you could almost walk across the bay from one ship to another,” he said.

When the war ended in August 1945, after the two atomic bombs were dropped on Japan, he returned to the United States.

“All of the sailors who were married got discharged first. The young guys like myself had to make one more trip. We took a shipload of supplies to China.”

After his discharge, Sanchez found work with A.E. Anderson Construction Co. of Buffalo, which had been hired to perform blast furnace repairs at the Republic Steel plant in Youngstown, Ohio.

With a steady paycheck coming in, he married his next door neighbor, Mary Martin.

“Anderson had contracts all over the country and I just traveled with them to the different steel plants. Anderson was like my family. I started with a pick and shovel and after three years, I became an apprentice bricklayer. Two years later, I became a foreman.”

By 1963, he had relocated to Buffalo and was traveling to South America with the president of the company to negotiate a contract. Sanchez, fluent in Spanish and Portuguese, proved himself invaluable.

And in time, he advanced to project manager and superintendent at different Anderson construction projects. Eventually, he became the owner of the company’s South American branch known as Andreco.

He and his wife of 68 years are the parents of two daughters, five grandchildren and three great-grandchildren.

Rather than spend his time thinking about the wars he has witnessed since his childhood, Sanchez says he prefers to reflect on the opportunities America gave him to succeed in life.

“If you’ve ever heard about the American Dream,” he said, “that’s my story and I didn’t even finish high school or have a college degree.”

So what’s his advice to others who want success?

“You have start at the bottom to know what you’re doing and that’s how you work your way up.”