By David Weigel and Ed O’Keefe

On Saturday night, elected officials and candidates for Democratic National Committee leadership positions joined protesters at airports around the country. On Sunday, Senate Minority Leader Charles E. Schumer (N.Y.) fought back tears as he announced that Democrats would introduce legislation to stop the order.

“This executive order was mean-spirited and un-American,” he said, flanked by refugees at a news conference in New York. “Look at these faces! Are they any kind of threat to America? No, they’re the promise of America.”

Schumer and House Minority Leader Nancy Pelosi, D-Calif., are inviting all Democratic lawmakers to join them at 6 p.m. Monday on the steps of the U.S. Supreme Court to show solidarity with legal attempts to block Trump’s travel ban. And in an interview, Sen. Chris Murphy, D-Conn., said he would introduce legislation to overturn Trump’s order by forcing him to comply with the 1965 Immigration and Nationality Act, which banned discrimination against immigrants on the basis of national origin.

“I think ultimately this ban will be struck down by the courts, but we need to put legislation on the table that Republicans could support, that overturns the ban,” Murphy said. “(The president) clearly campaigned on this ban, but the fact that he put no thought into how it was drafted or how it would be implemented is incredibly dangerous.”

Given that stance, Murphy said, Democrats must “force a debate” this week on Trump’s order by slowing consideration of the president’s remaining Cabinet nominees, especially Rex Tillerson, his choice to serve as the next secretary of state.

“We should take every ounce of time that we’re allowed on these nominees, to talk about the disaster that has been the first week of this administration, especially when it comes to foreign policy,” he said.

Schumer and Democrats are eager to move quickly because they believe there is a rare opportunity to ride a wave of GOP opposition to Trump’s moves. Democrats argue that one of the only ways they can influence policymaking in the next two years is to drive a wedge between Trump and members of his own party.

At his news conference, Schumer said he believed legislation could easily move through the Senate given the growing opposition from key Republicans, including John McCain (Ariz.), Lindsey O. Graham (S.C.), Ben Sasse (Neb.) and others.

Details of the legislative proposals were still being sorted out Sunday afternoon, but most are likely to be introduced by Democratic members of the Senate Judiciary Committee, which has oversight of refugee and immigrants’ rights issues, aides said. Schumer was working to coordinate the proposals Sunday; Murphy said he had received a call from the leader early in the day to confer.

Democratic leaders were also exploring the options for holding more public events to draw attention to the opposition to Trump’s orders - with the party seeking to once again tap into the anger that has driven millions of Americans into the streets.

Sen. Bernie Sanders, I-Vt., who has taken a leading role in Democratic messaging, said Sunday that the Senate needs “to pass legislation immediately which effectively rescinds Trump’s un-American and unconstitutional ban on people from seven Muslim countries from entering the United States” and to slow the nomination process.

“Almost without exception, Trump’s Cabinet nominees are extremely controversial and way outside of the American mainstream,” Sanders said. “In my view, the Senate needs to take as much time as possible on the floor for a full discussion and debate about each of these nominees.” 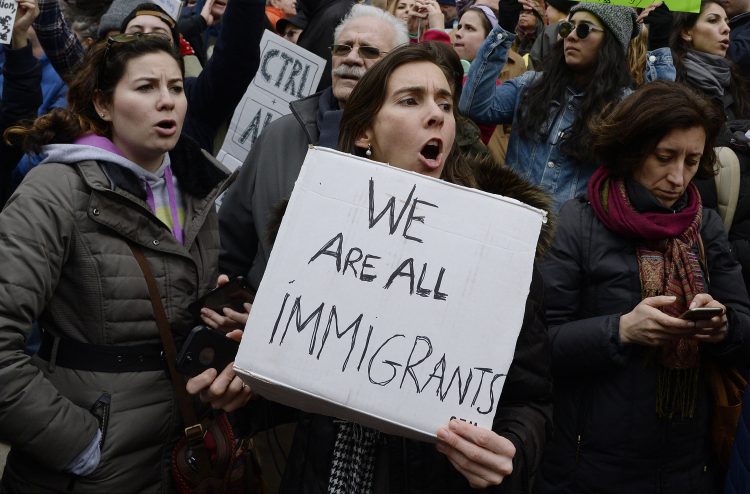 For the party’s restive base, that fight - just nine days into the new president’s term - could not come soon enough. While Democrats have embraced the protests against Trump and Republican policies, and while some helped organize more than 70 rallies on Jan. 15 against repeal of the Affordable Care Act, progressives have criticized the party for not voting en masse against Trump’s Cabinet picks.

“You better show up ready to do real work on Monday after all this pro bono work we, the people, did for you on our day off,” said CNN host W. Kamau Bell in a Saturday night tweet.

In several cases, Democratic lawmakers took one of the most basic steps available to them as members of Congress: They provided services for constituents. Reps. Jerrold Nadler, D-N.Y., and Nydia M. Velázquez, D-N.Y., who represent parts of Manhattan and Brooklyn, showed up at John F. Kennedy International Airport and helped activists and attorneys seek the quick release of green-card holders and refugees stuck in legal limbo after their arrival.

In Houston, where the candidates for DNC roles participated in the second of four “future forums,” activists filled a ballroom at Texas Southern University to ask why Democrats were not doing more. One attendee could be heard shouting, “Elizabeth Warren sold us out,” a reference to her committee vote in favor of Ben Carson’s nomination to become secretary for health and human services.

On Saturday afternoon, before the protests had gotten fully underway, some of the Houston event’s biggest cheers came when the candidates were asked whether they would oppose all of Trump’s nominees - something no Democrat has done.

“With what we have seen in the last seven days, I think we may be underreacting,” South Bend, Indiana, Mayor Pete Buttigieg said.

“We’ve got refugees who were vetted more than the Trump Cabinet was vetted,” said former labor secretary Thomas Perez.

Rep. Keith Ellison, D-Minn., the first Muslim member of Congress, said that the party needs to follow the lead of activists and that those activists are needed for direct action against Trump.

“It is street action that creates the economic and social conditions for legislation to get passed,” Ellison said.

“We knew this would be a day of reckoning when Donald Trump assumed the Oval Office,” Perez said to protesters. “Lady Liberty has taken a few body punches, but the American people will fight back.”

By Saturday night, many more elected Democrats were joining protests - and enabling them. After the Port Authority suspended the AirTrain that transports people from New York’s subway to JFK Airport, Gov. Andrew M. Cuomo, D-N.Y., reversed its decision. Sen. Robert P. Casey Jr., D-Pa., showed up at Philadelphia’s airport in a tuxedo, having left a formal event to help local elected officials negotiate with customs officers to see stranded immigrants and refugees.

At Dulles International Airport, Sen. Cory Booker, D-N.J., did the same - to little avail. At Boston’s Logan International Airport, Warren delivered a speech against Trump’s order that was amplified by the crowd, a “people’s microphone” that had been used by the Occupy Wall Street movement. And Sen. Kamala Harris, D-Calif., joined marchers protesting Trump’s travel ban outside the White House on Sunday afternoon.

Booker, Harris and Warren, considered possible Democratic presidential contenders in 2020, had cast three of just 11 “no” votes against Secretary of Homeland Security John F. Kelly. Murphy noted that the Senate quickly confirmed James Mattis, the revered former Marine general, to serve as defense secretary “because he assured us that he was going to argue against the very ban he watched Trump sign.” At a summer 2016 roundtable, Mattis had said the idea of a “Muslim ban” would make actors in the Middle East think America had “completely lost it.”

“Many of us gave the president and his Cabinet a little benefit of the doubt last week,” Murphy said. “I don’t see that there’s any reason that that should continue. Almost every single one of these nominees try to prop up their nomination by contradicting Trump in their confirmation hearing. It’s pretty clear now that Donald Trump and Steve Bannon are running this administration and the nominees that have been confirmed thus far have been marginalized.”

By Sunday afternoon, nearly every congressional Democrat had condemned the executive order, including Sen. Heidi Heitkamp, D-N.D., who faces a 2018 re-election campaign in a state Trump carried by 35 points. None defended it, but several remained silent. Rep. Gerald E. Connolly, D-Va., a member of the House Foreign Affairs Committee, cautioned that Democrats can only do so much to try to stop Trump, given their diminished powers on Capitol Hill.

“We’re going to have to pick our battles in the next two years because we don’t have the majority,” he said. “There are so many moving parts here, and we need to prioritize what we respond to and what we propound. We have to be proactively propounding an alternative vision that recalls American core values.”

In the House, Rep. Zoe Lofgren, D-Calif., a longtime advocate for immigrant and refugees’ rights, is set to introduce a bill this week that would block implementation of Trump’s order, according to senior House aides. And Pelosi informed colleagues Sunday afternoon that among the options her caucus would consider is filing an amicus brief in support of the American Civil Liberties Union if legal cases to block or reverse Trump’s travel ban reach the Supreme Court.

Connolly said that he and many other Democrats have been stunned by how organically Americans have been drawn into the streets to protest Trump’s early decisions as president. Just days after the Jan. 21 Women’s March on Washington, 200 more people than usual showed up at a regular meeting of the Fairfax County Democratic Party.

“That’s a sign,” he said. “And there are all kinds of people networking and asking the question, ‘What can I do?’ There’s not a sense of ‘Throw up your hands, our fate is sealed.’ It’s quite the opposite. It wasn’t a feckless, powerless act. It was a call to arms. And I believe it’s going to lead to mass organizing across the country to resist this constitutional assault.”