What are the odds that the Blizzard of '77 could happen again?

I’m tempted to say slim and none. Let’s amend that to “almost none.”

For this winter season, we are essentially at “none.” As far as we can discern from Buffalo weather records, the Blizzard of ’77 was a one-time event, at least since the late 19th century.

The setup leading to that disaster was unique. December and January had been progressively cold and getting colder in the Great Lakes and the Midwest. They weren’t quite as cold as February 2015, our all-time coldest month. But the longevity and worsening of the cold as we moved further into winter was virtually unprecedented. Natural gas shortages caused shutdowns of some industrial plants and businesses to ensure adequate heating gas for schools, homes and hospitals.

As for snow prior to the blizzard, even in November 1976 we had 31 inches at the airport, followed by 61 inches in December, and 68 inches in January. We were already in trouble before the blizzard, as the National Guard had been called in to aid in clearing snow from city streets before the terrible conditions were in the forecast. Thirty-three of the city’s 79 plows were out for maintenance, no doubt from the wear and tear of all the previous snow events.

Because of the persistent cold, most of this snow was fluffy, low-density snow. That meant it could easily become windborne, as opposed to slushy, water-laden snow that occurs with milder temperatures.

Lake Erie froze at a record early date of Dec. 14 in 1976. Its eastern end was covered with deep snow, and so was most of WNY. 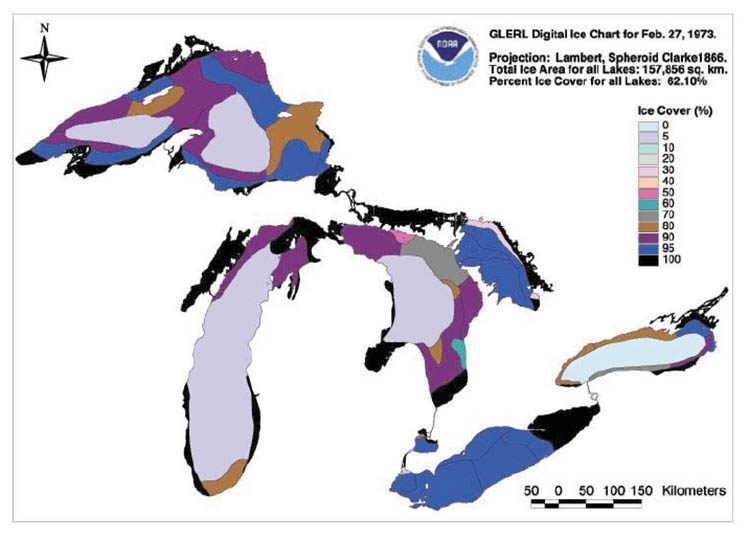 All of Western New York was covered by at least 3 feet of fluffy snow, and the larger area in dark blue had 4 feet or more on the ground. (Head to this page and scroll down to the second graphic.) The Buffalo Airport actually had 59 inches on the ground that morning.

Once this snow got picked up by high winds – gusting to over 50 and 60 mph – and got piled up against buildings, it was essentially hammered into high-density, packed snow by the winds’ force. Much of the snow that piled up in and near Buffalo was picked up off the frozen lake. But this ground blizzard affected all of Western New York, and it was the fluffy, windborne snow on the land that piled up farther inland.

What are the probabilities of nearly identical setup/antecedent conditions repeating in the future? Very low.

For one thing, prolonged cold periods are occurring with less frequency across much of the northern United States. It is conceivable that had a high-wind event occurred at the end of February 2015, our coldest month on record, we could have been in big trouble. The average temperature for that month was 10.9 degrees. There were 22 inches of snow on the ground, and you can bet with those temperatures that snow would again have been low-density. After all, the thermometer never went above freezing the entire month. And on Feb. 28 after that extraordinary month, the nation’s snow cover looked like this:

Twenty-two inches is not 59 inches, but it is more than enough to produce a ground blizzard had the right high-wind conditions occurred. Here is an animation of the pressure pattern and winds at about 5000 feet up at the time of the Blizzard of '77.

The kind of prolonged cold and prolonged snowy periods we had in December 1976 through February 1977, however, are becoming less common in eastern North America. Some of that is due to ongoing warming within climate change.

The fact that our Blizzard of ’77 occurred before global warming was accelerating more rapidly and that this ground blizzard was a one-of-a-kind event speaks to the low probabilities of a repeat.

One theoretical aspect of global warming, however, is reduced salinity in the North Atlantic from freshwater ice meltoff. The lessening in volume of higher-density salty water may be slowing the conveyor currents that drive the Gulf Stream. Should the Gulf Steam fade, the absence of that warmth would allow regional cooling in northwest Europe and possible northeastern North America.

IF that were to occur (see the latter part of my recent article), there is a hypothetical chance that global temperatures would continue to climb on average, but would be offset by the regional cooling. Whether that cooling would extend as far west as the eastern Great Lakes is an unknown. So while I have confidence probabilities of a repeat of the Blizzard of ’77 are very low, I’m not about to say never.