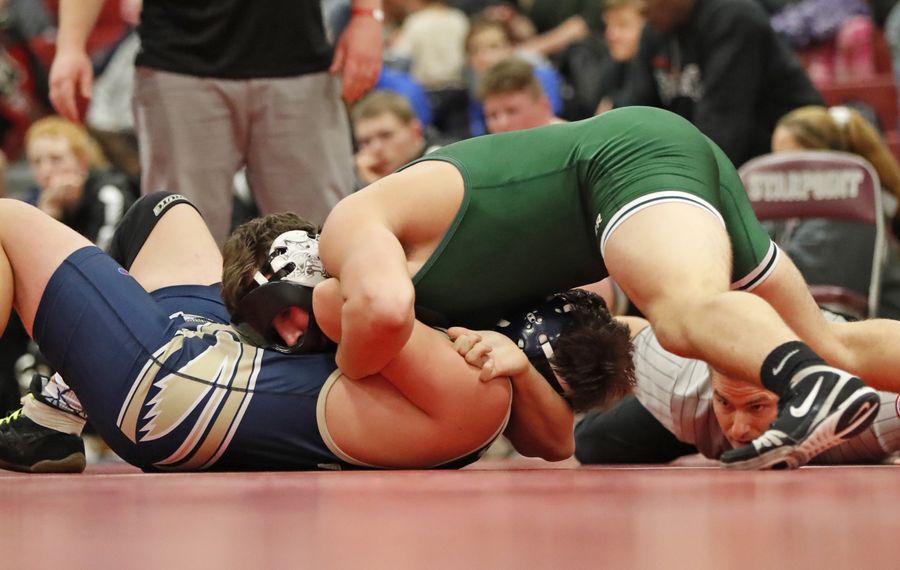 The books also better show that both achieved their feats in entertaining, cardiac kids-like fashion Saturday at Starpoint High School.

Niagara-Wheatfield rallied late in each of its three matches – capping its Cinderella-like run as a No. 4 seed with a 39-35 triumph over regular-season Niagara Frontier League champion and rival Lockport.

Matt Cicco, the top-ranked 182-pounder in Western New York, secured the championship with a second-period pin in the final bout of the match against the second-ranked Lions, which beat N-W in December.

"I went out there confident I was going to get the win," Cicco said. "It felt good to have the pin for my team and to know my senior year we won sectionals."

In the Division II final, No. 2 Pioneer won via tiebreaker over Falconer, 33-32, to avenge a regular-season one-point defeat to those same Falcons, who came into the event as Western New York's top-ranked small school. The Panthers (25-2) recorded one more victory during the match between the teams, which provided the criteria that broke a 32-32 knot at the end.

"We were excited to wrestle them a second time," winning coach Chris Edwards said. "I think the biggest thing is on our team all our kids accept their roles and Pioneer kids are tough kids."

An estimated 1,000 fans were on hand to witness the first ever crowning of Section VI team champions in wrestling. The section added the event in preparation for next year's inaugural state dual meet. The champions from all sections throughout New York at the Division I and II levels will gather in Syracuse the final weekend of January to decide which large and small schools are the undisputed No. 1 teams.

Coaches, Section VI officials and athletes were all thrilled when the state made the move to add a team championship to its tournament roster last fall because they believe the dual format provides a more accurate indication as to which teams are top to bottom the strongest. The format lends itself toward being more inclusive, as every wrestler in the starting lineup must play a role in the outcome. The scoring system in the Class Tournaments, on the other hand, leans heavily on rewarding teams for individual placement.

That system potentially shuts out the wrestler whose job in a match may simply be not losing via pinfall – saving his/her team points that could factor in the final outcome.

That scenario played out in both championship matches.

Cicco's match clinched the championship for Niagara-Wheatfield. The outcome of Mike Ziegler's and Connor Henderson's matches prior to Cicco's had as much to do with the comeback win for N-W (11-2).

Ziegler won via decision at 160 to give the Falcons a 33-32 lead. That put pressure on the Lions in the penultimate match to try to win at 170 pounds by more than just a three-point decision. A pin-fall victory would have put N-W in a spot where Cicco had to win by at least technical fall (five points) to take a tiebreaker out of the equation.

Henderson prevented that from happening, battling throughout in dropping a 1-0 decision to Connor Regis. That made the score 35-33 Lockport, putting Cicco in a situation where as long as he didn't lose – the Falcons were going to get a chance to strike the championship-winning pose.

"You don't have to be the best wrestler in the lineup to pullout the win for your team (in a dual)," Cicco said. "You don't get pinned, you do your job (and the team) should win the match."

Justin McDougald of Niagara-Wheatfield, left, takes on Mitch Seaver from Lockport during the Division I final at Starpoint. Seaver won the 113-pound bout in overtime 5-3, but McDougald and the Falcons captured the team championship. (Harry Scull Jr./Buffalo News)

In the semifinals, the Falcons erased a 35-29 deficit against No. 1 Clarence by winning the final three bouts of their match via pinfall. Donovan Brusino started the run with a win at 145. Josh Thibeault gave N-W the lead at 152. Ziegler closed out the 47-35 triumph by pinning Matt Rider at 50 seconds of the first period at 160.

N-W also rallied for a 38- 37 win over Grand Island in the quarterfinals.

So did Pioneer's wrestlers as they avenged a 35-34 loss earlier this season to Falconer by winning the Division II title. Both teams cruised through their first two matches as expected by many.

The Panthers pounced in the rematch, bolting to a 21-6 lead as a pin at 195 by Tyler Smith started it off. Pioneer also received a huge overtime win at 113 by Frank Ras and another key triumph by Trey Widemann at 126. But wins at 138 and 145 by Caleb Riordan and Kyle Jirak proved to be extremely vital. Both scored extra points late in those matches to turn potential three-point wins into a pair of four-point major decisions.

"Those guys getting turns in the last 10 seconds of their matches made it major decisions and gave us the points we needed (for the win)," Edwards said.

The third-place matches (the consolation finals) saw Clarence getting the better of Lancaster for a second time this season, 38-32, while Olean defeated Chautauqua Lake, 48-28.