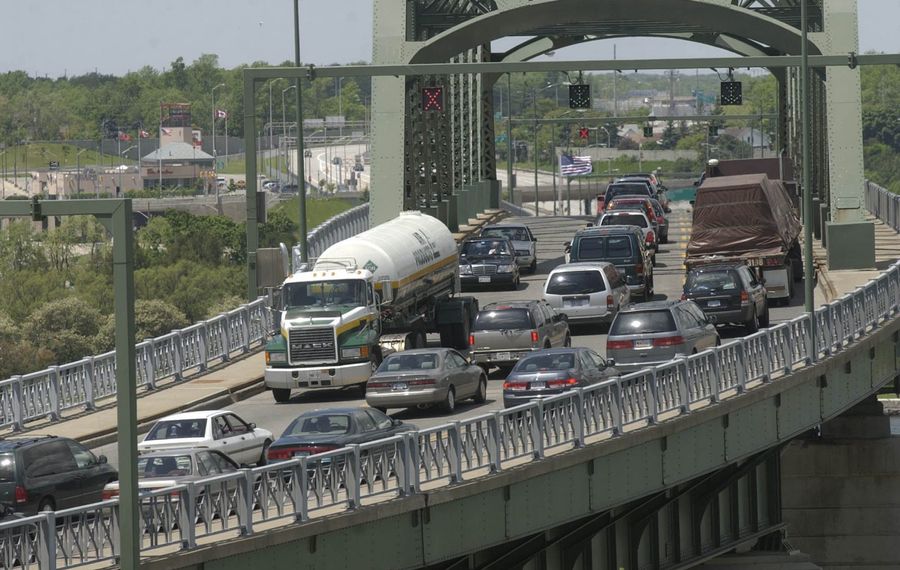 WASHINGTON – President Donald J. Trump's plan to use biometric checks - such as fingerprints or iris scans - for everyone entering or leaving the United States would cause massive backups at the Canadian border, according to the general manager of the Peace Bridge Authority.

"This would just devastate Western New York," said Ron Rienas, general manager of the Peace Bridge Authority, after reviewing the provision requiring biometric scans. "It would shut down the border. It just makes no sense."

In an executive order issued Friday, Trump calls for the biometric checks. It was included in tough new restrictions on immigration and refugee admissions.

The executive order states: "The Secretary of Homeland Security shall expedite the completion and implementation of a biometric entry-exit tracking system for all travelers to the United States, as recommended by the National Commission on Terrorist Attacks Upon the United States."

The order does not give the Department of Homeland Security a deadline for implementing the biometric system, but it calls on the agency to report its progress to the president periodically.

The commission mentioned in the order recommended such a biometric system after the Sept. 11, 2001, terrorist attacks, but Congress always rejected such a system because of the logistical problems and costs involved.

Rienas said the logistical problems would be immense. Every border crossing would take longer, and the Peace Bridge plaza in Buffalo would have to be expanded to handle new booths where additional inspectors would perform biometric tests on those leaving the United States.

The resulting traffic jams on both sides of the Peace Bridge would be so bad that Canadians would stop coming to Buffalo for Bills and Sabres games, Rienas predicted.

"Our traffic would drop like a stone," he said.

Rep. Brian Higgins, a Buffalo Democrat whose district includes the Peace Bridge, noted that implementation of the proposal would require the cooperation of the Canadian government.

Asked for comment, Christine Constantin, a spokesperson at the Canadian embassy in Washington, said: “In support of a strong, secure and efficient border, both Canada and the United States already securely share entry records of approximately 16,000 to 19,000 travelers daily, with no impact on the traveler experience. We are aware of President Trump’s executive orders and will continue to track them.”

Higgins appeared less concerned than Rienas about the proposal.

"I know what's going on here," Higgins said of Trump's pending executive order. "This is a silly idea that's going nowhere. But it feeds the narrative of his that he's anti-immigration."

A similar proposal surfaced in Congress two years ago. Higgins said research at the time determined that the cost of implementing such a system nationwide would be $6.5 billion, which meant the program would swallow 22 percent of the Department of Homeland Security's budget.

"The president can issue this executive order and he can ask Homeland Security to implement it, but he will have to come to Congress for funding," Higgins said. "That's where it will stop."

That's exactly what happened with that proposal from two years ago. House Republican leaders withdrew a bill that would require biometric tests at border crossings in five to seven years amid pressure from Rep. Chris Collins, R-Clarence, and other lawmakers that represent border areas.

Collins did not respond to a request for comment for this story. But the congressman -- now a leading liaison between Trump and the House -- played a key role in killing the 2015 proposal, introducing an amendment that would have not allowed the biometric plan to go forward unless it was tested in a demonstration project first to determine if it would cause traffic chaos.

“What we want is just to make sure that anything we do, number one, works, and number two, doesn’t cause undue delays at our northern borders and for folks coming to Bills and Sabres games and going to the Galleria mall," Collins said at the time. "We can’t have backups at the Peace Bridge or Rainbow Bridge or any of the others that would dissuade Canadians from coming into this country and also inconvenience Americans.”